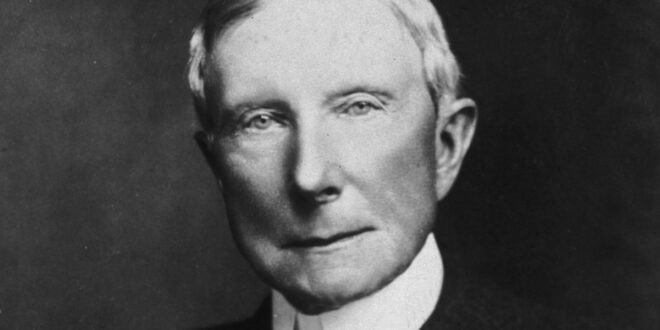 Since that time, the corporate interests have established near total control of the medical field, both though pharmacology and through their impact on medical education.

In the first part of the 20th century, the Rockefeller and Carnegie lobbies were up to their ears in eugenics, and it’s very unlikely that they have since reformed, writes Tessa Lena at Mercola. an osteopathic physician and best-selling author.

During the past two years, the toxicity of the “Rockefeller medicine” have become more obvious to all.

John Rockefeller and modern medicine: Abraham Flexner was born in 1866 in Louisville, Kentucky. He lived until 1959. Flexner is considered the ‘father’ of modern medical education. For several years, he ran a college prep school in his home town of Louisville. In 1908, Flexner published “The American College: A Criticism,” a book criticizing American college education.

Notably, his brother, Simon Flexner, whose medical education at Johns Hopkins School of Medicine he helped finance, was a medical researcher at the Rockefeller Institute for Medical Research (later renamed to “Rockefeller University”) and its first director, as well as a personal friend and advisor of John D. Rockefeller. Abraham’s daughter Eleanor grew up to become a “pioneer of women’s studies.”

His nephew, Louis Barkhouse Flexner (1902 – 1996), was a founding director of the Mahoney Institute of Neurological Sciences at the University of Pennsylvania and a former editor of the Proceedings of the National Academy of Sciences.

With the Carnegie’s financial support, the ERO quickly became the most important center for eugenics research in America.”

(But of course, all the dark overtones are all in the past because since then, the human nature has changed, and the powerful people of the world have finally realized that it’s not nice to try to modify the human race — and left that habit behind!) Phew.

Anyway, back to Flexner. In the words of the most trustworthy authority on medical education in America, the American Association of Medical Colleges (disinformation be dammed), Abraham Flexner, “often called the ‘father’ of modern medical education … was an education specialist who was commissioned by the Carnegie Foundation for the Advancement of Teaching to assess the state of medical education in the United States and Canada in the early part of the 20th century.

Flexner visited all 155 medical schools existing at the time and issued a detailed report in 1910 — Medical Education in the United States and Canada, also known as the Flexner report — that called for major reforms to medical education, including higher admissions standards for students, adherence to the scientific method in research and practice, and oversight by state licensure boards.”

The Flexner report is a curious read and a reflection of his subjective views on the world — the views of a loyal supporter and a professional beneficiary of the pharmacological school of thought who carried a great distrust of homeopathy, osteopathy, and so on. Here is my tongue-in-cheek summary of the report:

Thus, Flexner proposed a total restructuring of the American medical education, and he specifically mentioned that the eradication of “dissidents” is a positive thing.

He framed the need to restructure and standardize the medical education as a “public need” (with the Carnegie and Rockefeller interests being the implied guardians of the public needs, without a doubt).

Here are some quotes: On the benefits of standard education and the closing of schools that don’t fit his view:

John Rockefeller and modern medicine: On pharmadynamics (the study of biochemical and physiologic effect of drugs) and … cocaine:

On the need to be exact (as a matter of wordplay, precision medicine comes to mind):

On medicine as it relates to race: 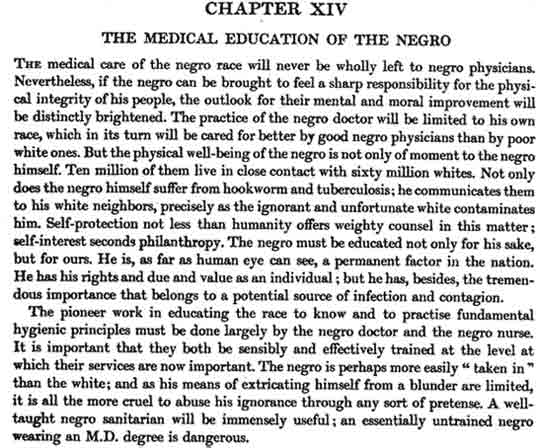 If we were to summarize the report and say the quiet part out loud, we could say something like: “Let all the things that I don’t understand or control be gone — at last — and let the medical field be shaped after my views, with the financial help and to the financial benefits of my friends.”

On a side note, Flexner’s contempt for “electrical” medicine probably contributed to the disaster of the electromagnetic pollution that we are experiencing today.

The Power of Confident Prejudice: Flexner Report and Modern Medicine

John Rockefeller and modern medicine: As a result of the Report — that incidentally perfectly served the financial interests of the Rockefellers — new requirements were introduced, and a very large number of medical schools had to get out of the way and close down. The reform especially impacted the schools graduating predominantly African American doctors and the schools teaching what is known today as “alternative medicine.”

According to Wikipedia, “Flexner clearly doubted the scientific validity of all forms of medicine other than that based on scientific research, deeming any approach to medicine that did not advocate the use of treatments such as vaccines to prevent and cure illness as tantamount to quackery and charlatanism.

Medical schools that offered training in various disciplines including electromagnetic field therapy, phototherapy, eclectic medicine, physiomedicalism, naturopathy, and homeopathy, were told either to drop these courses from their curriculum or lose their accreditation and underwriting support. A few schools resisted for a time, but eventually most complied with the Report or shut their doors.”

In the spirit of eliminating competition, the fields of holistic medicine that were previously regarded as “normal” in society, became artificially discredited — which cleared the markets for the Rockefeller interests through the promotion of oil-derived medications and Rockefeller education-shaped doctors who felt that they were “smarter” than the so called “quacks” because their professors told them so.

Here’s your market restructuring at work — as it dances to the beat of emotional poverty, good intentions, bad intentions, ignorance, a missionary itch, a very confident tone, and financial controls!

The Rise of John D. Rockefeller: A Very Quick Summary

John Rockefeller and modern medicine: This topic of John D. Rockefeller’s rise is endless, and for the sake of this article, I am only providing a brief overview, for context. One is left to wonder if his habits developed at least in part in reaction to the trauma of his dad’s betrayal. Did he feel wronged and humiliated? Was he compensating for his humiliation by becoming on the most influential people in the world? Maybe, maybe not, we’ll never know.

As rumor has it, his mother, due to relative poverty, taught him to be extremely thrifty. Allegedly, as a kid, John D. Rockefeller sold chocolates to his classmates, saved money to later lend it with interest, etc. He was always “serious” and rarely smiled.

As an adult, John d. Rockefeller was known for his ruthless elimination of competition and his extreme obsession with cost cutting. His first job, at 16, was of a bookkeeper. From there, he became a successful general merchant. Then in 1863, he built his first oil refinery in Ohio, and eventually, through notorious practices, he came on top of all his competition.

“To crush his competitors, Rockefeller would create a shortage of the railroad tank cars that transported oil. He’d then buy up all the barrels on the market so his competitors would have no place to store or ship their oil. He bought up all the available chemicals that were necessary to refine oil.” He was also known for his “rebates.”

By 1882, his Standard Oil had a near monopoly on the oil business in the United States. According to history.com, “In 1890, the U.S. Congress passed the Sherman Antitrust Act, the first federal legislation prohibiting trusts and combinations that restrained trade. Two years later, the Ohio Supreme Court dissolved the Standard Oil Trust; however, the businesses within the trust soon became part of Standard Oil of New Jersey, which functioned as a holding company.

In 1911, after years of litigation, the U.S. Supreme Court ruled Standard Oil of New Jersey was in violation of anti-trust laws and forced it to dismantle (it was broken up into more than 30 individual companies).”

At the time of the breakup. Rockefeller held over 25% of Standard’s stock (per Wikipedia). He and all of the other stockholders received proportionate shares in each of the 34 companies. Over the next 10 years the breakup proved immensely profitable for him. The companies’ combined net worth rose fivefold and Rockefeller’s personal wealth jumped to $900 million.”

Also per Wikipedia, “one of the most effective attacks on Rockefeller and his firm was the 1904 publication of The History of the Standard Oil Company, by Ida Tarbell” [the daughter of Franklin Summer Tarbell, whose company went out of business due to Rockefeller’s ruthless choking of competition’]. “She documented the company’s espionage, price wars, heavy-handed marketing tactics, and courtroom evasions.”

Interestingly, the publication happened around the same time when Rockefeller started really focusing on “philanthropy,” which is not dissimilar how Bill Gates became passionate about philanthropy after his antitrust troubles. Both transformations of a monopolist into a philanthropist magically supported the goal of securing even more control of the markets as well as psychological control, disguised as investing in education, medicine, and so on. Read the full article here.