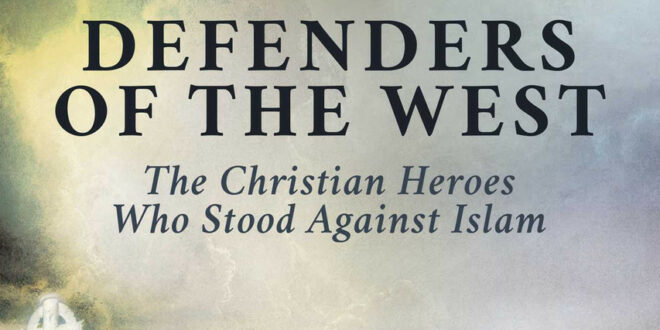 The Defenders of the West: Which values are we really fighting for?

The historical virtues that once built a world-leading Western civilization or the atheist hedonist relativism that permeates Western thinking today?

Which of these values hold the moral high ground?

“He who occupies the high ground…will fight to advantage,” wrote the Chinese military strategist and mastermind, Sun Tzu in The Art of War.

Until this day, he who holds the moral high ground and is respected for upholding a universally recognized standard of justice, prevails in the long run.

In this light, a new book becomes particularly interesting, The Defenders of the West, in which bestselling author and Islamic scholar, Raymond Ibrahim tells riveting stories about the age when Europe represented Christendom and first fought the growing Islamic empire which aspired to take control over European soil.

This writes historian of comparative religions, author and founder of The Herland Report, Hanne Nabintu Herland in her regular column at World Net Daily.

The Defenders of the West: He brings to life eight Christian military heroes who from the 1100s A.D. stood up against injustice to fight for human dignity and the Christian faith. These are remarkable tales from a time of massive upheaval—not unlike our own age.

Yet, the historic values of Christianity such as tolerance for differences, equality regardless of race, creed or status, respect for the family, religious freedom and moral decency are traditional values arguably no longer popular in the West.

Many forget that the 1776 American Revolution and the 1789 French Revolution only revived ideals concerning the rights of the common man – ideals that had previously existed and been developed during the Christian Middle Ages.

Most of the intellectuals in the 1600s “Age of Enlightenment” were devout Christians: Anselm of Canterbury, Thomas Aquinas, John Locke, Johannes Kepler, Galileo Galilei and more.

What is remarkable about The Defenders of the West is that it documents a history of fierce warfare and heroic Christian warriors, yet manages to invoke matters of the heart as it addresses the quest for justice, the willingness to protect the population from atrocities and the choice to give one’s life for one’s country.

The sacrifice, the humility, the relentless work to protect their Christian homelands and their religious faith invoke admiration.

These were the lives of El Cid, Richard the Lionheart, the Romanian hero Vlad the Impaler, popularly called “Dracula” Son of the Dragon of whom we have quite a Hollywood-distorted view, Godfrey of Bouillon, John Hunyadi, and the Albanian ‘braveheart’, Skanderbeg.

Ibrahim says that Skanderbeg has arguably been the most celebrated throughout Europe. In the centuries following his death, more than one thousand books in over twenty different languages, operas and plays, were written about him.

The Romanian hero, Vlad the Impaler, fought to retain the Romanian borders against the Ottoman invaders, stating that the Turks were the “cruelest enemies of the Cross of Christ”.

Having gained a remarkable notorious reputation, Vlad the Impaler was nonetheless able to force the Turks to retract, and his remorseless defiance stopped the Islamic conquest into Romania. These are but examples of how famous these men were, in an age that is mostly forgotten in the Western heathen, liberal hegemony of today.

When Edward Gibbon wrote his epic masterpiece The History of the Decline and Fall of the Roman Empire, he carefully recorded how the decline in civil virtues, morality and discipline ended up legitimizing corruption, causing disorder, injustice and the end of the Roman empire.

Those who pushed for the traditional Roman values that once built Rome became the enemy of state.

When a civilization is at its zenith of power and influence, it often develops a decadent complacency, self-glorifying itself as the noblest civilization known in history.

Its initial values are abandoned and hedonism, greed and lawlessness permeate its elites and sift down to the population. In these moments of self-exaltation, a blind sense of invincibility prevails, which often leads to its downfall.

The Defenders of the West: Ibrahim, who is mostly a historian who retells the story of “eight eminently violent men who played leading roles fighting Muslims back in the era 1100–1500, when Christianity was a ‘muscular religion’,” as President of Middle East Forum, Daniel Pipes writes –  he still touches on the sad demise of West.

Postmodern globalism and atheist materialism makes it hard to explain to the affluent Western public that “many leaders in the Islamic world have never dropped its ancient ideas of jihad.

Few now comprehend that many in the Muslim world want no part of a Westernized “end-of-history” or ecumenical vision of global harmonization,” as stated in the foreword. The Rest simply do not want the nihilist relativism of the West. We are not viewed as the heroes in this world, rather the very opposite.

Previous Germany faces collapse of its economic model, with deluded political leaders
Next The Ancient Defenders of the West against Islam in Europe, new book by Raymond Ibrahim