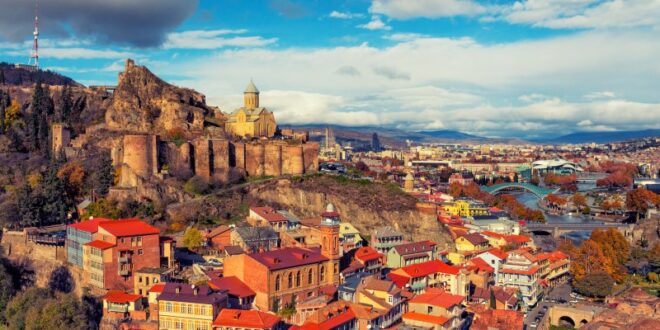 Herland Report: Georgia, the former Soviet republic, is now a remarkable success story. Its economy is growing at 5% per year, and the country ranks ahead of the United States in economic freedom.

The overall lesson from Georgia: Government should be very small. It should just regulate the minimum.

Yet, 20 years ago, Georgia was even more miserably poor than the rest of the former Soviet Union, writes John Stossel at WND.

So, what can America and the rest of the world learn from Georgia’s progress?

A lot, says my executive producer, Maxim Lott. He’s spent the past several months in Georgia and made a StosselTV video about it. But Georgia is not the best place to grow tea.

That industry, and most others, vanished when Soviet support ended. “Three-fourths of the Georgian economy disappeared,” he says.

Central planners are never smart enough to run something as complex as an economy.

Fortunately, in Georgia, an eccentric libertarian, Kakha Bendukidze, became economy minister in 2004. He made “everything private, as much as possible.” Georgia scrapped 90% of licensing and permit requirements. That reduced corruption.

“Every license means interaction with officials. Every interaction with the official can be an open door for a corrupt request,” explains Fady Asly, chairman of Georgia’s International Chamber of Commerce.

Georgia has come a long way since then. With fewer rules to obey and licenses to get, there are fewer reasons to bribe. Transparency International now says Georgia is less corrupt than all its neighbors. The country also fired its entire police force, customs office and tax service, and diminished government agencies by half.

This created a “huge boom,” says Asly. “Georgia turned from a failed state to a very successful state.” Its economy grew 10% a year.

Buildings that had been burned were restored. McDonald’s and KFC arrived. Some prosperity came to Georgia.

“This was kind of a libertarian utopia for four years,” says Iva Nachkebia, national coordinator for Georgia’s branch of Students for Liberty.

But then the politicians decided that since things were going well, they would get in on the action. Instead of leaving markets free, they gave privileges to cronies.

“They chose 10, 15, 20 businessmen who were close to the government,” says Asly. “And they started protecting them at the expense of their competitors.”

Since the protected businesses got big tax breaks, businessmen like Asly couldn’t compete.

“After losing a couple of million dollars,” says Asly, “I decided to stop the business.”

Economic growth slowed. Now the economy grows at half the rate it once grew.

He says that mentality must change for Georgia to develop. Either “you want to take responsibility about your life, or you are fine with being a slave and having some kind of a master who will provide you with your needs.”

He’s right, but I question whether “years of Soviet rule” are what made the difference. There’s plenty of hostility toward free markets among privileged Americans who’ve never heard Soviet propaganda.

The overall lesson from Georgia, says Asly: “Government should be very small. It should just regulate the minimum.”