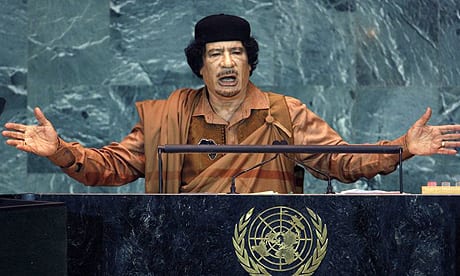 Herland Report: The killing of Gaddafi 10 years ago: Americans are the most propagandized people on earth.  In place of a news media they have a propaganda ministry that is a lie machine.  Americans live in a spun narrative of lies.

Few understand the evil intentions of their rulers and the way government is used to enrich the elite.  British journalist Richard Medhurst explains how ten years ago US and French elites destroyed an entire country.

The crudely evil Obama and the white bitch Hillary, together with French President Sarkozy, currently a jailbird, destroyed a highly successful country and murdered its leader for their own profit, writes Dr. Paul Craig Roberts.

The destruction of Libya is one of the many crimes of Western colonialism that has undermined the confidence of Western intellectuals in Western civilization.

It is crimes such as the murder of Libya that have resulted in the destruction or removal of statues and monuments and the teaching now institutionalized in schools that white people are racist.

The killing of Gaddafi 10 years ago: When you think of the destruction of Vietnam, Iraq, Libya, and Palestine, and the attempted destruction of Syria and Iran, just to mention some of the atrocities of our current era, it is possible to comprehend why the West has lost its moral gloss and is increasingly despised by growing numbers of its own citizens in addition to Arabs, Africans, Latin Americans, Russians, and Asians.

Corrupt and evil Western “leaders” have succeeded in marginalizing the West.  Every western country now consists of refugees from countries that the West has destroyed and citizens who have lost confidence in their leaders and culture.

We ourselves are experiencing the fall of Rome.

Previous China takeover and Western corruption: The West Has Lost Its Dominant Position
Next The Media lies about Libya War 2011: Gaddafi, Sarkozy and exile-Libyans’ role