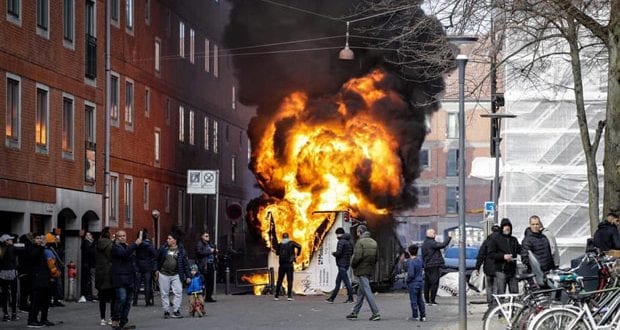 Turn for the worse for Western Rape Capital Feminist Sweden

Herland Report: Rape Capital Feminist Sweden: As Denmark now sets up border controls with Sweden, due to civil unrest, the story of Sweden has taken yet another step for the worse.

Financial Times states how bombing attacks in Copenhagen are linked to Swedish gangs, to the point that the Danes need to close the border to boost security.

In Sweden, it is regarded as a crime to criticize the development. Individuals who do are brought to court for simply pointing out that foreign born offenders are responsible for the country’s gang rape problem. The media silence is deafening.

Instead of choosing a positive view on immigration such as Switzerland where jobs are provided for those who enter the country, Sweden has gone in the opposite direction, creating massive civil unrest among its immigrants.

Amid soaring crime rates, gang violence, complaints about education, and pregnant mothers even being turned away from maternity wards due to a lack of capacity, resentment in Sweden has built over the influx of more than 600,000 immigrants over the past years.

Dr. Paul Craig Roberts recently addressed the issue, pointing out that the rape rate is so high in Sweden that 25% of Swedish women  are afraid to leave their homes.  Sex crimes have tripled in four years.

Yet, the mere mention of such statistics deems you to be a racist in Sweden. It may easily take you to court. The subject of rape and the identity of the rapist is simply not to be talked about.

A study by the Swedish newspaper Aftonbladet found that 88 per cent of gang rapists in the Scandinavian country over the last six years have had a migrant background. Other figures show that migrants from Muslim-majority nations commit 84 per cent of “very violent” rapes in Sweden. This happens in a country that prides itself in having a Feminist government.

Now, here a peculiar fact from DeLarge: Most of Sweden’s media is owned by Jewish families. The man who invented Swedish multiculturalism was in fact not a Swede at all but a holocaust survivor named David Schwarz.

He dedicated his life into turning his new host nation into a multicultural country.” Below is an old, Sweden Most Wanted list, the country now infamous for being the rape capital of the West.

Some statistics on rape and crime in Sweden

Rape Capital Feminist Sweden: Zerohedge also points out: Swedish newspaper Expressen recently published a report that out of 32 gang rape cases adjudicated in 2016 and 2017, 42 of the 43 of the rapists were migrants or descendants of migrants; 32 had been born abroad.

They encompass 200 criminal networks, consisting of an estimated 5,000 criminals.

Twenty-three of those areas were especially critical: children as young as 10 had been involved in serious crimes there, including ones involving weapons and drugs. Most of the inhabitants were non-Western, mainly Muslim, immigrants.

Forty years after the Swedish parliament unanimously decided to change the formerly homogenous Sweden into a multicultural country, violent crime has increased by 300% and rapes by 1,472%.

Sweden is now number two on the list of rape countries, surpassed only by Lesotho in Southern Africa.

In an astounding number of cases, the Swedish courts have demonstrated sympathy for the rapists, and have acquitted suspects who have claimed that the girl wanted to have sex with six, seven or eight men.

Sweden seems to be suffering from mass psychosis. A sort of country-wide Stockholm Syndrome, wrote Vincent DeLarge sometime back.

The article is worth revisiting. He states that Sweden is run by an Orwellian-tier ministry of truth masquerading as a free media.

Now, here a peculiar fact from DeLarge: Most of Sweden’s media is owned by Jewish families. The man who invented Swedish multiculturalism was in fact not a Swede at all but a holocaust survivor named David Schwarz. He dedicated his life into turning his new host nation into a multicultural country.”

Rape Capital Feminist Sweden: “With a population of 10 million people Sweden is home to just 20,000 Jews. Being just 0.2% of the population they punch above their weight. Much of Sweden’s media is owned by the Bonnier family and a disproportionate number of journalists and experts have names like Wolodarski, Silberstein, Radetzki, Rothstein, Aschberg, Leman, Epstein etc.

Another example is Jersey Sarnecki, a Jewish criminologist who is trotted out on a regular basis to “debunk” that crime is increasing or that migrants commit more crime than natives.