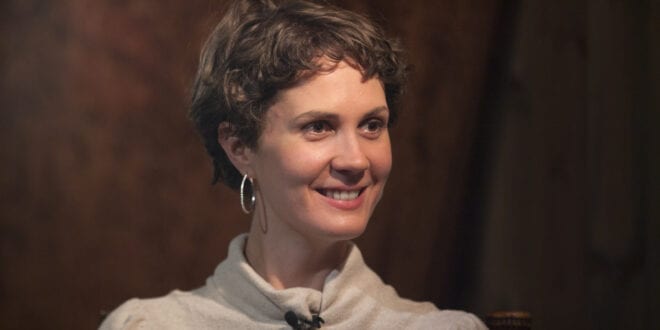 Herland Report: The concealed Biblical references in Henrik Ibsen’s late plays is the topic of this month’s Cave of Apelles, produced by Bork Spildo. The theater expert, Adara Ryum, makes her appearance to talk about the dramatist Henrik Ibsen and performance practice.

Ryum points out how «updating» Ibsen always implies turning him into political propaganda, and that «modernizing» classical theatre results in losing the intensity of the story and insight into the fundamentals of human nature.

As a case study, Ryum points to Ibsen’s most famous play, A Doll’s House. Is Nora (the lead character) a feminist icon — or a spoiled, irresponsible, lying and cynical brat, devoid of empathy?

– Whether Ibsen was Christian or not, it is clear that he was much inspired by the Bible, and made use of biblical motifs, says the theater expert Adara Ryum, who recently directed the stage performance of Odd Nerdrum’s The Last Days of Immanuel Kant in Oslo.

In the 23rd episode of The Cave of Apelles, Ryum and host Jan-Ove Tuv explore Henrik Ibsen’s stage play A Doll’s House. Both of them underline their debt to Nora, du lyver! (Nora, you are lying!), a book that annihilates the conventional interpretation of Ibsen’s play.

With that in mind, Ryum argues that Nora, who has become an international feminist idol, is not the heroine after all — an argument based partly on Ibsen’s many Biblical references.

But even more importantly, are the last plays by Ibsen’s something more than “contemporary” drama? The centerpiece for this conversation was “The Crucifixion” by Sebastian Salvo.

The episode was hosted by Jan-Ove Tuv and produced by Bork S. Nerdrum, with assistance from Sebastian Salvo and Cassander Straumsgaard.

While Nora is often perceived as the heroine, Ryum points to Mrs. Kristine Linde as the true hero of the story. Both Nora and her husband Torvald Helmer do not want to take responsibility, whilst Linde represents the personification of the modest, self-sacrificing Christ.

– Both Nora and Torvald have this aversion towards reality — towards sickness, decay, and not having it awfully fun all the time, Ryum says.

She explains that every time something about death, ageing, or taking responsibility is discussed, Nora finds it boring.

Kristine Linde is Nora’s complete opposite: self-sacrificing, honest, hard-working, and acceptant of the “harsh necessity” of life.

Nora famously leaves her husband in the final scene, and is thus perceived as the quintessential “modern” woman. Ryum claims that the couple which is truly “modern” is Kristine Linde and Nils Krogstad, as Mrs. Linde offers to work while Krogstad is at home with the children.

But there is a grander problem involved with the politicized understanding of Nora:
Instead of revolting against the eternal Laws of Being, she is reduced to a protest against the norms of Bourgeois society.

Ryum explains that there are good, but somewhat superfluous reasons to why Nora Helmer is perceived as a feminist idol. She is seemingly under the power of her husband, who calls her condescending names, such as “song bird” and “squirrel”, and treats her like a child. But these factors only count for Torvald’s bad behavior, not Nora’s role as the heroine.

The whole premise for Nora being the heroine is predicated on the fact that she takes out a loan (illegally) to go on an extended trip to Italy to cure Torvald of a terminal illness. We forgive her, since “The Patriarchy” has forced her to do it.
But what if the whole business about her husband’s illness is a lie?

– Nora really wanted to go to Italy for fun. She found an excuse. But she didn’t tell him, and that’s probably because he was not terminally ill, Ryum says.

There are reasons to doubt Nora’s explanation about Torvald’s illness, according to Ryum. For instance, which terminal illness can you be completely cured from by travelling for one year in Italy? Nora claims that the illness was caused by over-exhaustion, but how can a healthy young man get terminally ill from over-exhaustion? The answer: his wife’s insatiable desire for amusement.

In addition, Nora claims that the doctors informed her about the illness and suggested the trip abroad to her in private — which is unlikely given the woman’s role in society at the time.

When Henrik Ibsen in his later years was asked what he was reading, he responded that he only read the newspapers and the Bible. Ryum reveals some of the many Biblical references in A Doll’s House.

Firstly, the story takes place on Christmas Eve, and Nora brings home a Christmas tree. Ryum reminds us that in the 1870s, the Christmas tree was still considered a pagan symbol.

– So she brings this pagan symbol into the house and she places it in the middle of the room. When Torvald asks her what she wants for Christmas, she says “Oh, Torvald, can’t you just give me money?” He replies “That would not be any fun, right?” But then she says “You can just wrap it in golden paper and hang it on the Christmas tree”. And what does that remind us of?

– The dance around the golden calf, says Tuv.

Ryum points out another detail that might sound minor at first: the character Doctor Rank is never called by his first name.

– Who else is not called by its first name?

– …The devil himself, Tuv replies.

Do not take responsibility for your own life, is the doctor’s devilish memorandum to Nora. His demonic role is shown later in the play as well.

After a Christmas party masquerade, Doctor Rank knocks on the door, and they ask who it is. He responds It is I. But who says “It is I”…?

Ryum quotes Christ: “Many will come after me and say ‘it is I’, but they are not me. They will be false prophets.”

She also mentions that Doctor Rank says: “On the next masquerade, I will be invisible” and that “I will wear this invisible hat”.

– This invisible hat is clearly a symbol of the wizard, something demonic. It’s a clear pointer to Rank as the Devil, Ryum says.

Another reference becomes evident in the scene where the terminally ill Dr. Rank expresses gratitude to Nora for “the fire” — often understood as a melancholic reference to the warmth she has shown him. However, in Nora, du lyver! (Nora, you are lying!) the real meaning is exposed: Thank you for kindling the perpetually burning fire in hell through your sinful actions…

Nora then asks what she will be on the next masquerade. The doctor responds “You can just wear your ordinary clothes, as you walk through the world”.

In the very last scene, when Nora is leaving her husband, Torvald asks: “Where are you going?” She replies “I’m going to take off the costume”, and then she presents herself on stage in her ordinary clothes.

– Then she has put on her costume, a new masquerade has started, and Doctor Rank is invisibly attending, Ryum remarks.

Are We Ready For A New Heroine?

In the play, Kristine Linde enters as the savior, Ryum claims. She forgives Nils Krogstad, with whom she rejuvenates an old relationship, and thus makes him the only character in the play who actually develops. Through Kristine’s (or Christ’s) forgiveness, he turns from being bitter to merciful.

Although there are other details in the play that point to Kristine Linde being the true heroine of the play, Ryum is unsure if the society at large is ready to knock Nora off her pedestal:

– Henrik Ibsen himself introduced the term life illusion — the lie that we all base our lives upon. He says that if you take away the life illusions of an ordinary person, you are going to take away his happiness at the same time. So I’m wondering: are we ready to take away our illusions about Nora or not?