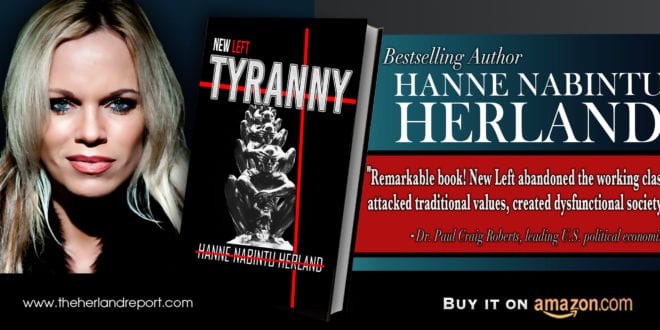 Herland Report: The mainstream media seems to desire the shut-down of free speech and diversity of opinion, pulling the “Fake News” card on those who don’t quite see the world from the CNN angle.

And it is worrying when over 90 % of the US media is owned by only 6 corporations. It is very easy to manufacture consent and produce an illusion of choice, writes historian of comparative religions and author, Hanne Nabintu Herland.

Many wonder where this apparent authoritarian push suddenly came from, this demand for everyone to agree with the politically correct perspective, but the idea is very old. (Illustration Huffington Post)

They knew that it was the democratic, bureaucratic and institutionalized society that caused Nazism to function so well in Germany. They were Marxists, and saw the destructive forces at work during National Socialism in Germany.

It was precisely the excellent organization within the institutions, the state-controlled bureaucracy and the propaganda push in the media that made the National Socialist government so successful in controlling the population. The population was controlled through fear of what would happen if they voiced opposition against the government. Free speech was effectively silenced in the brutal National Socialist system.

After the war, the Frankfurt School ideologists were looking for ways to moderate the Marxist pre-war ideology in order to make it more applicable to the post-war world.

What many do not reflect on, is that the leading intellectuals in Europe did not change their ideology after World War II.

The pre-war ideology continued, only slightly modified as neo-Marxism. Philosophers such as Theodore W. Adorno, Herbert Marcuse and Max Horkheimer launched the concept of “critical theory,” implying that science should not just describe, but also change oppressive conditions in social structures.

The revolt against the traditional, Western values founded in Christianity became more and more evident. A “modern” outlook on life slowly came to mean “an atheist outlook”. Traditional, historical values increasingly was looked upon with scorn.

This was a fine way of saying what Herbert Marcuse later pointed out: The need to discriminate and repress the majority, Christian views in society in order to implement an ideology that did not respect traditional, Western values.

Marcuse was the father of the 1960s student revolution, and he openly spoke about the need to repress those who did not agree with the New Left thinking. A new authoritarianism was on its way.

The idea was that if the critical theory were applied, the bourgeoisie misuse of power would be avoided. They defined who represented the “oppressive force in society” and who represented “freedom”.

Adorno and Marcuse became the intellectual founding fathers of the student rebellions of 1968, the New Left in America and its extreme liberal attitudes.

This became the early days of free sex, abortion and the revolt against traditional religion.

Adornos “point de depart” asserted that the process of modernity had failed to free people from the bondage of the past and instead further enslaved them. This kind of thinking began permeating the American university structures. And slowly, the American youth were enslaved by yet another ideology: The New Left hatred of traditionalism and religious faith in God.

Free speech: Critical theory stated that it wished to expose “the offender,” and fight for those who were victimized by the bourgeoisie. What later became apparent, was the cunning use of words in order to silence those who opposed the New Left.

The Frankfurt ideologists set out to reform that which was not working, but the movement tragically ended up fundamentally changing the whole historical Western value systems.

The tool became to silence diversity of opinion and quench the voices that still supported the traditionalist world views.

Kirsten Powers points out in The Silencing. How the Left is Killing Free Speech that the increasingly illiberal Left’s silencing campaign is a form of “repressive tolerance,”arguing that Herbert Marcuse openly spoke of the need to curb freedom of speech in pursuit of left-wing ideological goals.

Marcuse wanted to change “oppressive conditions”, – defined as the ideas of the bourgeoisie, the Christians, the Conservatives. These groups became the enemy. To fight them became the goal.

Marcuse’s words reveal the hidden authoritarian pursuit in this kind of thinking, stating that repressing other worldviews is both necessary and defensible.

The lack of respect for different opinions and the democratic process becomes apparent. Suppression of “regressive” policies – defined as those with traditionalist opinions – was the prerequisite for the strengthening of “progressive” ideas.

The prevalent force by which these philosophers tended to demand uniformity and consensus, is quite shocking. Whilst speaking about the need for “free speech”, the underlying push was to crush the very same principle.

Marcuse’s words on the need for suppression illustrates the blatant lack of respect for free thinking rooted within the New Left, a tendency that later was to bloom into what we today experience as a remarkably illiberal media elite.

As we see, the very foundation of the New Left was stained by authoritarian views and a repressive agenda. Diversity was to be suppressed through limiting tolerance towards the “unwanted” groups in society.

The New Left’s campaign for conformity was coupled with strategies of demonizing and defaming its opponents, hoping that this would silence all opposition. Kirsten Powers argues that to this day delegitimization through demonizing and intimidation remains the Left’s most successful tactic against political and ideological opponents. So, it seems that “Fake News” is a term that will continue to be stamped on those who embrace diversity. We shall soon find out where this will lead us.

Hanne Nabintu Herland is a bestselling historian of religions and author, founder and host of The Herland Report, known from the media for fearless speech and stern criticism of political correctness.
She states that our democracies have been taken over by an extreme-liberal elite that no longer listens to the voice of the people. Read a short excerpt from her new book, The Culture War. How the West lost its Greatness, now available all over the USA and in 60 countries world wide. www.theherlandreport.com