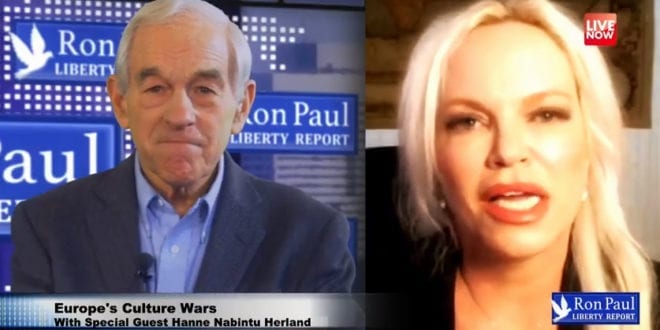 Herland Report: Historian and author, Hanne Herland speaks to Dr. Ron Paul at The Liberty Report about her new book “The Culture War. How the West lost its Greatness and was Weakened from Within”, stating that the West has left its initial value system and become entrenched in a culture of greed, selfishness, materialism and no mercy with people in other cultures.

She adresses the eroding democratic structures in the West, pointing to destructive Washington trends, and the ultra-rich elites where the 1 % now own more than 80 % of world assets, according to Oxfam.

Herland states that American Christianity has failed and become hypocritical, that there are few human rights for other than White America.

The discussion adresses the wars in the Middle East where the US spends billions of dollars and a war industry which also only benefits the 1 %, while American inner-cities, cities and the middle class is faltering.

The US mainstream media 90 % is owned by only 6 corporations, who own the weapons industry, the deep state constituting the very problem eroding our once, great Western democracies.