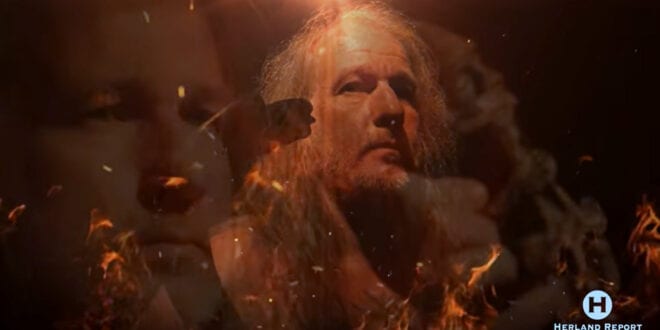 We are discussing the Scandinavia Viking Age, Norrøn Norse religion and the mystical heathen world of modern Vikings in the new VIKING TV series on The Herland Report.

Enoksen represents some of the ideals within the popular and growing modern Viking focus on Norse living and traditions, heathen rituals and mysticism.

In the short interview below, Lars Magnar Enoksen explains why he is so interested in the Viking age and the modern reconstruction of this historic period in Scandinavian history that is currently being reenacted all across Europe.

Each year, thousands of reenactment modern Vikings gather in Viking camps all over Europe, returning to nature and a Viking way of life.

This highly organized re-enchantment with the traditions, rituals and way of life in the Scandinavian Viking age also entice the millions of tourists who visit Scandinavia yearly.

In the first program, we speak to Lars Magnar Enoksen, one of the leaders in this massive and engaging movement who recently have been touring the USA, Costa Rica and South America.

Follow The Herland Report new VIKING series that focuses on the old Viking culture that famously expanded from the time period of 750 till 1100 AD. Watch the first program here!

Historian of comparative religions and bestselling author, Hanne Nabintu Herland: – Lars Magnar Enoksen, you are a celebrated Viking expert that travels all around the world to talk about the Viking age culture with emphasis on Runes and the Nordic traditional fighting style Glima.

Lars Magnar Enoksen: – This is an old interest that had already been aroused in me as a child, when my father told bedtime tales about Vikings.

He spiced up the original stories with a skillful familiarity of the subject. The main factor was his willingness to answer all my childish questions.

Hanne Nabintu Herland: – What is it about the Viking culture that fascinates you so much?

Lars Magnar Enoksen: – Honestly, I have no idea, strangely enough! Yet, I am only aware of the fact that I have very strong interest in Viking culture.

Hanne: – Many claim that the Viking culture was predominantly a male expression. That they worshipped an attitude clearly opposed to the more feminine ideals being currently enhanced. Do you agree?

Lars: – Not at all! It would be a huge exaggeration, both regarding the historical epoch and our modern era, to view the existence like that.

We should not forget that in the Viking culture, women and men were on equal levels. Women did the fighting and the hunting too.

There were the “shield maidens” and Valkyries. It was a culture when both sexes had equal power and the women were strong and independent.

They were independent. They could choose the lovers that they wanted.

Hanne: – Did the women join the men fighting or did they stay at home while the men went to war?

Lars: – Many joined the men in fighting, yes! A female warrior was called “shield-maiden” by the native Vikings.

A fact that have been stated by Irish sources, within their historical chronicles expressing awe that some of the Viking raiders had female chieftains.

Hanne: – GLIMA! You are undoubtedly Europe’s leading expert in Glima. Can you explain more?

Lars: – Firstly, it should be mentioned that a modern sports version is very popular on Iceland which have their masters.

My expertise is in regard to the elder and more traditional self-defense version of Glima, which is mainly developed to improve battle-field survival.

Hanne: – Does Glima have any religious meaning?

Lars: – Not necessarily, but it has a strong spiritual connection. Mainly through Galdra-singing, which is an arcane incantation method to achieve more fighting-power.

Hanne: – Can you talk more about Nordic Heathenry?

Lars Magnar Enoksen: – Belief and faith are a personal thing that has many expressions and approaches. Norse devotion can be defined as a religion around nature that offers many Gods and Goddesses to communicate with.

Hanne: – To your knowledge, how is Nordic Heathenry practiced nowadays?

Lars Magnar Enoksen: – The interest in Norse religion has grown enormously the last 15 years. It may be practiced in groups along with ceremonies. Or in private, with personal rituals.

Hanne: – What kind of values are we missing today, that the Vikings had more of?

Lars: – Most of all, I am missing the individual strength and valour of taking full responsibility for his or her actions.

It is not strange to make mistakes sometime. Yet, it is cowardly behaviour to flee from the consequences of those blunders.

Hanne: – RUNES! What are Runes and how are they used?

Lars Magnar Enoksen: – Runes are basically sound-imitating symbols, similar to our modern letters. But they also have a spiritual dimension, associated with sorcery.

Hanne: – Which countries did you visit last to teach Viking culture and Glima-wrestling?

Lars Magnar Enoksen: – Previous year (2019) I toured the USA, Costa Rica and Colombia. Giving seminars in regards to the Viking culture. Colombia seems to have the most serious interest across the Atlantic. While Costa Rica has the best Glima-wrestlers outside of Europe to speak of.

Thank you, Hanne Nabintu Herland! It was very wonderful to be able to discuss Viking religion with you.

The Herland Report Scandinavian news site, TV channel on YouTube and Podcasts have millions of readers/viewers yearly. It is a great place to watch interviews and read the articles of leading intellectuals, thought leaders, authors and activists from across the political spectrum. The Herland Report believes in freedom of speech and its editorial policy resides above the traditional Left vs Right paradigm which we believe has lost its relevance and ability to describe the current driving forces in Western politics.
Previous TV interview: Russia Gate is an Ongoing Coup from Obama officials – Judicial Watch, William Marshall
Next The Liberals want a Race War: People should Walk Away