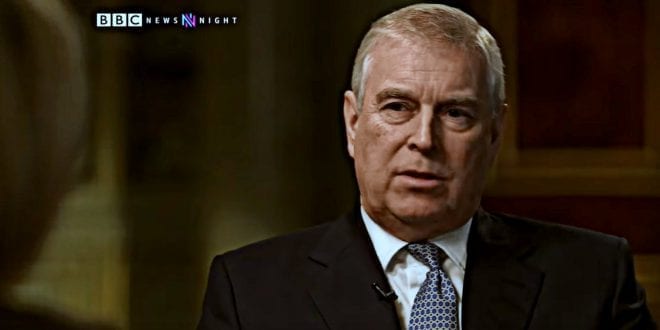 Herland Report: Jeffrey Epstein friend, Prince Andrew is stripped of everything by Queen Elisabeth who has shown remarkable leadership throughout the years in dealing with complicated issues.

The Queen has told her second son, Prince Andrew, to step down from all royal duties and stripped him of his taxpayer-funded salary.

The Duke of York has effectively been retired in disgrace at the age of 59.

The Duke of York’s shocking interview with the BBC, where he clumsily admitted to being the guest of honor and entertaining Epstein at the “celebration dinner of his release” nailed the coffin.

Criticism had been ongoing for months due to his ties to the US convicted sex offender, Jeffrey Epstein. The PR strategy was for Prince Andrew to ease the criticism by openly adressing the issues in a BBC interview, which backfired heavily. (The photo allegedly shows Prince Andrew, Virginia Roberts, Ghislaine Maxwell.)

British media reports that Prince Charles demanded that his brother lost his royal duties due to the ongoing friendship with Epstein.

The BBC sums up the take away from Prince Andrew’s notorious BBC interview, saying that the Duke of York still does not regret his friendship with Epstein.

He also met with Epstein’s then partner and alleged co-pimp, Ghislaine Maxwell (daughter of the late newspaper tycoon, Robert Maxwell) in June, 2019, months after the US Department of Justice had said to reopen the Epstein case.

The BBC interview focused on why he stayed with Epstein in 2010, after Epstein’s conviction and imprisonment. Why did he attend the celebratory dinner as Epstein’s guest of honor, when Epstein was released from prison for sex offences against a minor?

The FBI is now encouraging Prince Andrew to a thorough explanation to them.