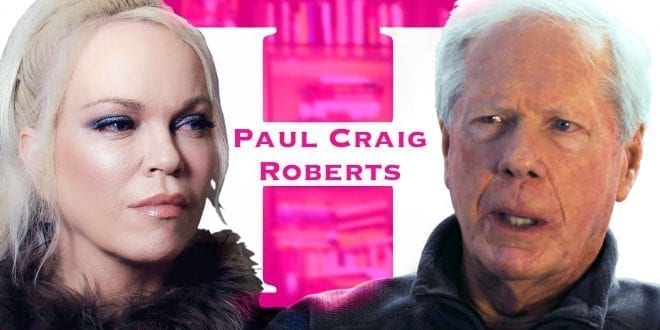 Watch the exclusive short from The Herland Report TV (HTV) as Dr. Paul Craig Roberts gave us his analysis on Russiagate in 2018, a year before the Mueller Report which showed that there was no evidence for any “Russian collusion”.

Roberts adresses the memo from one of the intelligence Committees in Congress that summarized their investigations of Russiagate in 2018. The memo never reached the media – of course.

Dr. Roberts states: The four page memo stated that Russiagate really is a conspiracy between the Military Security Complex, Hillary Clinton against President Trump. This is an act of High Treason. It involves the very top levels of the CIA, FBI, the Democratic Party. The whole thing was a hoax created to discredit Trump.”

Dr. Roberts is the chairman of The Institute for Political Economy, former editor of Wall Street Journal and a well-known author of many books. He is awarded the Treasury Department’s Meritorious Service Award for “his outstanding contributions to the formulation of United States economic policy. Dr. Roberts points out that: “When Donald Trump got elected, instantly Identity Politics began attacking him, from the liberal progressive Left. This made them willing to cooperate with the Military Security Complex, since Trump said he was going to normalize relations with Russia.”

“One of the intelligence Committee in the Congress has released a four page memo, summarizing their investigations of Russiagate.”

“They say that Russiagate really is a conspiracy between the Military Security Complex, Hillary Clinton against President Trump. This is an act of High Treason. It involves the very top levels of the CIA, FBI, the Democratic Party. The whole thing was a hoax created to discredit Trump.”

“You see, the media is no longer run by news people, it is run by former government officials, by corporate advertising executives.”

“The editors know what they can’t say or can’t allow to be printed and if the journalists don’t know that, their stories get spiked. You have to go along with whatever explanations the oligarchs want. This is why the media has been consistent in telling a lie.”

“Of course, they did the same thing about Gaddafi in Libya, about Saddam Hussein in Iraq, about Afghanistan, about Assad in Syria, about a Russian invasion in Ukraine.”

“There is a possibility, I don’t know how great, of a huge turn around, in which case the constraints on Trump against the normalizing of the relationship with Russia would be swept away. And once you you normalize that relationship, everything in the world changes.”

Previous As We Face Armageddon the Western World Is Leaderless
Next TV interview with Ray Bady: Everybody is looking for love and acceptance