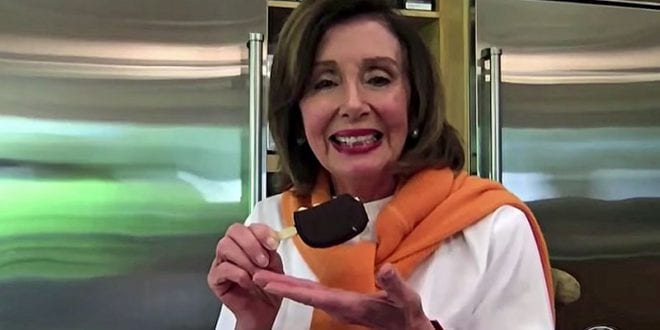 Pelosi smilingly sits in front of her $24,000 fridges, talking about candy and gourmet ice cream while the nation struggles in a massive national emergency.

While the shutdown due to the Corona crisis has caused 22 million or more Americans file for unemployment as funding for small businesses runs dry, a smiling Pelosi on furlough talks about candy, grand children and seems quite detached from the national tragedy.

In essence, the smiling Nancy Pelosi ice cream and candy focus may serve to demonstrate how the Democrat political game is not about caring for the American people, rather continuing the near civil war focus on “getting Trump” rather than doing what is best for Americans.

It is hard to forget the Nancy Pelosi clip in which she explains how the Democrats cheat and lie in order to defame and frame its political opponents. The remarkable clip can be viewed here or below.

The ongoing political civil war in the United States, and attempted coup against the duly elected president, Donald Trump steadily puts the corruption within the Democratic Party forefront. The latest Pelosi ice cream clip again illustrates the lack of focus on the needs of the American people.

The utterly disgraceful display of lack of manners from Nancy Pelosi as president Donald Trump held his State of the Union Address again demonstrates the same attitude.

Even worse than the lack of professionalism, Pelosi’s actions demonstrated that she does not care about the betterment of the American people.

Instead of rising above the political strife and celebrate the rising living standards, record low unemployment, an economic boom which has launched millions out of poverty, she did not clap. Nor rise, just rudely flipped with papers.

When Trump spoke about America being pro-worker, pro-family, pro-growth, and, most of all, pro-American, she did not rise nor clap. When he spoke of the United States lifting high citizens of every race, color, religion, and creed, she did not clap nor rise.  It was obviously not on Pelosi’s agenda to be happy about the blue collar boom prior to the current Corona crisis.

Nancy Pelosi ice cream talk demonstrates Democrat elite perspective: As President Trump is fighting to get control over the situation in Washington, he recently called upon Pelosi to return to Washington and work, criticizing her over her appearance on the James Corden show.

“I think the Democrats are going to do it. Look, Nancy Pelosi, she’s away on vacation or something and she should come back,” Trump said at the briefing Friday.

“She should come back and get this done. I don’t know why she’s not coming back. The fact is, she’s not doing her job and there’s nothing unusual about that for her,” reports The Hill.

Nancy Pelosi ice cream talk demonstrates Democrat elite perspective: Listen to how the Speaker of the House, Nancy Pelosi explains how Democrats smear and lie in the video below, how the Democratic Party smears its opponents with falsehoods and lies, then reports the smear and lies to the press.

They then use the same smear reported in the press by the Democrats, as Pelosi candidly explains, to re-validate the lies as “confirmed by the press.” It is apparently called The Wrap Up Smear, of which she seems to proudly proclaim to be an honorable Democratic party tactic.

She states: “You demonize, it is called the Wrap Up Smear. You smear somebody, with falsehoods and all the rest.”

“Then you merchandise it, you write it and say “It is reported in the press” this and this, so you have the validation that the press reported the smear. That’s what’s called a Wrap Up Smear.”

“So, we merchandise what the press has reported on the smear that we made. It is a tactic.”