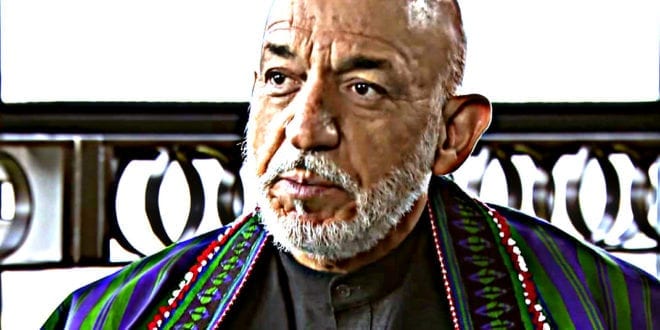 Herland Report: Hamid Karzai: Billions of US dollars have been used to fight extremism, yet Islamic extremism is rampant more than ever before in Afghanistan. Why?

Former President of Afghanistan, Hamid Karzai, speaks about these issues in this ground-breaking interview where he strongly condemns the detonation of America’s most powerful non-nuclear bomb on Afghan territory some time back.

Hamid Karzai states that the US came to bring peace to Afghanistan, yet now – after the US longest war in history, 17 years of war in Afghanistan – extremism is thriving in the region to a horrifying extent as human suffering and death tolls are steadily mounting.

Now there is also Daesh and other terror groups. Hamid Karzai asks: “Who did this under the watch of the USA?”

Karzai further explains how Daesh-IS are being supported supplied by unmarked military helicopters in many parts of Afghanistan, and are using US bases in Afghanistan.

Which role are the Americans actually playing in the region? Who are the actual allies? Karzai states that naturally there are questions, and these questions are founded on fundamentally strong evidence of wrong doing. He states:

“When we welcomed the United States and its allies in the West, it was not only to remove extremism from Afghanistan, and to bring us liberation as a country, but also to be a democratic society.”

“We believed in the West’s practice of democracy, and we thought it was the same ideals they had for us. Sadly, soon we recognized that no. What they (The West) choose and prefer in life for themselves, is used against us as a tool of manipulation.”

The Herland Report Scandinavian news site, TV channel on YouTube and Podcasts have millions of readers/viewers yearly. It is a great place to watch interviews and read the articles of leading intellectuals, thought leaders, authors and activists from across the political spectrum. The Herland Report believes in freedom of speech and its editorial policy resides above the traditional Left vs Right paradigm which we believe has lost its relevance and ability to describe the current driving forces in Western politics.
Previous Hvorfor behovet for demonisering av muslimer?
Next Øystein Stray Spetalen: Altfor mange tør ikke si sin mening