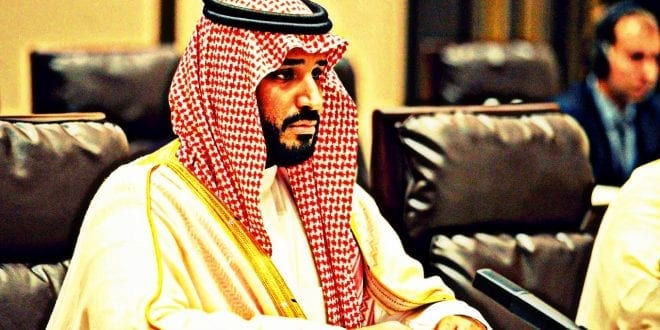 But claims by some media – directed by Turkey, Qatar, and The Washington Post (for whom Khashoggi was a contributor) – suggest otherwise, writes Col. (ret.) Dr. Jacques Neriah, a special analyst for the Middle East at the Jerusalem Center for Public Affairs, was formerly Foreign Policy Advisor to Prime Minister Yitzhak Rabin and Deputy Head for Assessment of Israeli Military Intelligence.

The Washington Post cited unnamed U.S. sources who claimed the murder was carried out under the orders of Crown Prince Mohammed Bin Salman and perpetrated by his closest assistants and advisers, after which MBS was reportedly briefed by the task team of the results of their grim task. (Photo: Crown Prince Mohammad bin Salman Al Saud (Kremlin.ru)

The world reaction to the killing of Khashoggi is an expression of outrage over the beastly behavior of the Saudi regime.

However, it is also clear that Saudi Arabia’s rivals have found a weakness in its defenses that allows them to undermine Saudi Arabia’s international and regional position, weaken its regime, and maybe even push for a change in the government that would best serve their interests.

There is no doubt that Turkey, Qatar, Iran and its satellite Hizbullah, together with the Syrian regime are the big winners of the Khashoggi faux-pas.

An official Central Intelligence Agency assessment is scheduled to be presented to the White House on November 20, 2018.

The Saudi Arabian regime’s stuttering and inadequate response to these accusations led to an international outcry. First of all, the Saudis denied the murder and tried to cover it up with a series of actions meant to make-believe that Khashoggi had left the consulate where he was assassinated. Saudi officials also refused the Turkish authorities access to the consulate and the consul’s residence.

Then the Saudis presented a version of the story that Khashoggi suffered a heart attack following a scuffle with the Saudi team that came to arrest him and bring him to Saudi Arabia. Eventually, the Saudi regime admitted that the murder was carried out by a rogue Saudi team, led by a Saudi intelligence spymaster working on his own agenda, and with no connection whatsoever with MBS.

The Saudi Response Came Too Late

The Saudi reaction to the murder came too late, was too little, and fell far short of responding to the media campaign and manipulation led by the Turks, the Qataris (relentless enemies of Saudi Arabia), and The Washington Post, where Khashoggi was employed as a journalist. As a result, Saudi Arabia today finds itself under pressure for more transparency, and its regime has become the focus of scrutiny for both its former allies and its rivals and enemies.

When trying to understand the Saudi response, it is obvious that the regime was too slow in its reactions, did not grasp the changing mood in world opinion against it, and did not offer adequate answers.

Suddenly, MBS is no longer seen as a reformist or a visionary, but rather as a cruel politician who profited from the weakness of his rivals in a purge carried out in November 2017, when many of those arrested were forced to disburse hundreds of millions of dollars after being incarcerated in the most beautiful prison in the world – the Ritz-Carlton Hotel in Riyadh.

MBS was also behind the kidnapping of Lebanese Prime Minister Saad Hariri, also in November 2017, who was beaten on his way from the airport in Saudi Arabia to his confinement by the same intelligence officer who took part in the Istanbul operation.

Worse, MBS, the architect of the Saudi war against the Houthis in Yemen, pro-Iranian militias who tried to take over Yemen in 2015, was taken by surprise by the shift in world opinion. The war was now considered to be unjust, and the Saudis were accused of creating the biggest humanitarian crisis ever by starving to death millions of Yemenite children!

Saudi Arabia’s biggest mistake was to believe that the U.S. reaction would be limited and minor, mostly to please the media.

Indeed, the Saudis were first led to believe this would be so following Donald Trump’s statements that the United States should continue its economic and military relations with Saudi Arabia because of huge job-creating contracts signed between the two countries.

The Saudis ignored the changing mood of President Donald Trump, who felt the Saudis had misinformed him (or even openly lied to him) about the Khashoggi assassination.

Under the pressure of the media and the newly elected Congress, Trump chose to impose sanctions on Saudi Arabia for the first time in the history of the two countries.

First of all, the United States decided to stop providing air tankers to refuel Saudi fighter aircraft in midflight during their missions in the war in Yemen. Then, it imposed sanctions on 17 Saudi officials, restricting their access to the U.S. financial system, and freezing their assets.

Additionally, a bipartisan group of six U.S. senators has even proposed new sanctions against Saudi Arabia, including halting arms sales, sanctioning individuals who hamper humanitarian aid to Yemen, imposing “mandatory sanctions” on any person involved in Khashoggi’s murder, and asking for a report on human rights in Saudi Arabia.

The Enemies of Saudi Arabia Step in

The world reaction to the killing of Khashoggi is an expression of outrage over the beastly behavior of the Saudi regime.

However, it is also clear that Saudi Arabia’s rivals have found a weakness in its defenses that allows them to undermine Saudi Arabia’s international and regional position, weaken its regime, and maybe even push for a change in the government that would best serve their interests.

There is no doubt that Turkey, Qatar, Iran and its satellite Hizbullah, together with the Syrian regime are the big winners of the Khashoggi faux-pas.

Oddly enough, the only countries that have expressed some solidarity with Saudi Arabia are its Arab allies – the Gulf States, Egypt, and Sudan – and unexpectedly, Israel’s Prime Minister Benjamin Netanyahu, who publicly stressed the importance of Saudi “stability.” A change in the leadership of the Saudi royal house could be detrimental for those allied with MBS.

Time for Change in the Saudi Royal Family?

With the unexpected crisis unfolding around the Khashoggi murder, there is no doubt that the House of Saud is under attack. Calls from within the royal family are being voiced, demanding change in the regime.

These calls are mainly focused on the need to neutralize MBS’s excessive powers and limit his influence on military and defense issues. Some even seek his replacement by King Salman’s younger brother, septuagenarian Ahmad Bin Abd el Aziz, an open critic of MBS, who was called back from London, where he had been staying for some time, and arrived in Riyadh in late October 2018.

At this time, MBS has ignored the criticisms against him and continued to behave on a “business as usual” basis.

However it is crystal clear that with all the mounting accusations of U.S. intelligence sources, Saudi Arabia can only comply with the demands for a reshuffle in the balance of power within the royal family, whose main scapegoat could be MBS.

Saudi Arabia cannot afford to be under U.S. sanctions. President Trump voiced his assessment by saying that without U.S. support, the House of Saud would not last two weeks in power!

On the other hand, bearing in mind MBS’ ambitious character, one cannot underestimate the possibility of him waging a coup to replace his ailing father (maybe even with his consent). In such a case, an era of instability may well prevail in the region, and Saudi Arabia could face a very stormy outcome, left with only a handful of local allies.

The article was first published at The Jerusalem Center for Public Affairs.