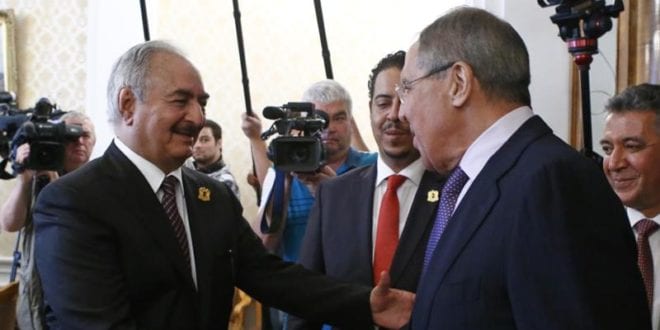 Herland Report: Libya, the Middle East biggest Proxy War: Russia threatens Allied Tripoli control amid US riots: General Khalifa Haftar, the commander of the Libyan National Army army, supported by Russia, Saudi Arabia, UAE, Egypt and other nations, is progressing to the point of threatening Western control over the nation.

Haftar already controls much of the Libyan oil and gas, so vital to nations such as France.

The Berlin Conference demonstrated back in January how vital the control over Libyan oil and gas is to the EU, the conference was no lasting success.

The Berlin Conference was all about who controls Libyan oil. What is really at stake is the Libyan oil and gas reserves, out of Misrata and Tripoli controlled by Italy and others, as 30-40 % of Italian gas comes from the Misrata fields.

If general Haftar and Russian allies were to take over dominion of Libyan oil and gas, Russia will, in effect, be able to shut down the electricity in Italy. It would imply Russian control over European energy supply.

While the US president Donald Trump is occupied with quenching the Gene Sharp style “American Spring” riots – which General Abdel Fatah el-Sisi in Egypt would remember well when it happened to Egypt during the “Arab Spring” in 2011, Russia prepares for new talks with Turkey over Libya.

The West has controlled Libya since the 2011 NATO war, under growing unrest and militia war lord rule. Russia did for long not engage in Libya, as its throttle power was on Syria. Many in Libya hoped that Russia would intervene at the time, but the time was not right.

Now it seems to be, as the Syrian struggle appears to soon come to an end, the Western moderate and jihadi forces having lost its cause.

Libya, the Middle East biggest Proxy War: Russia threatens Allied Tripoli control amid US riots: As the war ends in Syria, Libya is catching fire the past two years, and General Haftar now enjoys the support of the Wagner Group mercenaries, Russia, halfway clandestinely France who is dependent on Libyan oil, and other nations as the aim is to take Tripoli from Western control.

Pro-Haftar forces have been battling since April last year to seize the capital Tripoli from the UN-recognised GNA, in fighting that has left hundreds dead and forced 200,000 to flee their homes.

A military commission made up of five GNA loyalists and five Haftar delegates held talks in February, but the dialogue was suspended.

Al Jazeera writes: Russia and Turkey are again taking the lead in efforts to find a solution to Libya’s near decade-long crisis – and hoping in the process to carve out spheres of influence for themselves in the oil-rich North African nation.

The United States military commander for the African theatre has confirmed Russia has sent a powerful force of MiG-19 Fulcrum fighters and Su-24 Fencer bombers into Libya.

Libya, the Middle East biggest Proxy War: Russia threatens Allied Tripoli control amid US riots:  LA Times writes: The warplanes, a mix of at least 14 MiG-29 fighters and Su-24 fighter-bombers, appear to have taken off from a base in Russia sometime in the middle of May and flown to Hmeimeem, Russia’s airbase on Syria’s Mediterranean coast.

There they were repainted, their Russian Federation Air Force markings obscured, before flying more than 1,200 miles and landing in eastern Libya, in territories controlled by Russia’s ally, strongman-in-waiting Khalifa Haftar.

The deployment, which the Pentagon revealed this week and Moscow denied, is the latest in a series of escalations that have seen all types of weapons — Turkish and Emirati drones, Russian anti-aircraft systems, Jordanian-made armored vehicles — enter Libya’s Mad Max-like battlefields, in often-blatant disregard of a nine-year-old arms embargo.

The Herland Report Scandinavian news site, TV channel on YouTube and Podcasts have millions of readers/viewers yearly. It is a great place to watch interviews and read the articles of leading intellectuals, thought leaders, authors and activists from across the political spectrum. The Herland Report believes in freedom of speech and its editorial policy resides above the traditional Left vs Right paradigm which we believe has lost its relevance and ability to describe the current driving forces in Western politics.
Previous Politidrapet på George Floyd, corona desperasjon, fattigdom og politiserte opptøyer i USA
Next George Floyd Protests: Is It Racism When Police Murder and Brutalize White People?