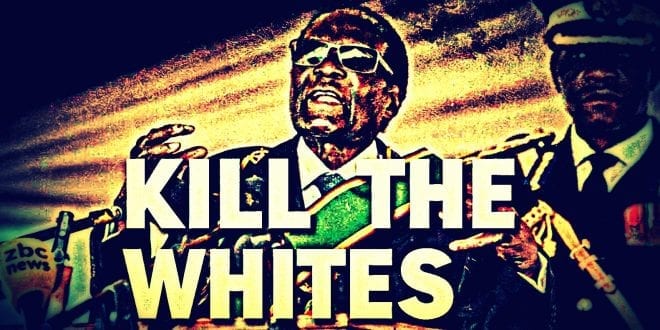 Herland Report: Helen Raleigh: ANC Racist Violence Against White South Africans: The more radical wing of South Africa’s ruling party has long pressured its leaders to redistribute wealth from the white minority to the black majority in any way they can. They’ve begun that process, violently.

White farmers in South Africa face an existential threat, yet the governments of most Western democracies, including the U.S., remain largely silent.

This appalling situation must change, writes author Helen Raleigh, a senior contributor to The Federalist. She is an immigrant from China, the owner of Red Meadow Advisors, fellow at the Centennial Institute in Colorado.

The Herland Report comments: South Africa’s President Cyril Ramaphosa’s announcement that the ANC will amend the constitution to permit the seizure of white farmers’ lands without compensation and redistributed to blacks, makes it thereby legal to steal private property when the owner is white.

Black political leaders, such as Julius Malema, the Marxist who heads South Africa’s third largest party, speaks about “the need to openly call for the killing of white people” and “go after the white men, we are cutting the throat of whiteness”. This is happening while South Africa’s jobless rate is increased to 27.7 percent.

The more radical wing of South Africa’s ruling party, ANC, the African National Congress, has long pressured its leaders to redistribute wealth from the white minority to the black majority in any way they can.

Being a farmer in South Africa, especially if you are a white farmer, can be a life-threatening occupation.

The exact numbers of crimes against white farmers are hard to come by, because South African police doesn’t track farm related crimes by race.

According to BBC, the best available data shows that overall farm murders  are at their highest level since 2010-2011. Saying “enough is enough,” South African farmers, mostly white, staged a protest against farm murders in October last year.

The situation for white farmers has gotten worse since the end of February. Julius Malema, leader of the Marxist Economic Freedom Fighters (EFF) party in South Africa, brought a motion that called for a constitutional amendment to allow the confiscation of white-owned land without compensation.

To open his motion, he declared, “The time for reconciliation is over. Now is the time for justice.”

Now the bill is referred to the Constitutional Review Committee.

When Malema presented his case to expropriate white farmers’ land, he claimed, “We are not calling for the slaughter of white people — at least for now.”

But some people on the ground took the parliamentary vote as an open invitation from the government to do whatever they please with white farmers.

Since then, white farmers reportedly have been beaten, raped and killed. Yet South African authorities seem to have done little to either denounce Malema’s radical rhetoric or address violence against white farmers.

Yanking Land From Its Rightful Owners Has Never Worked

ANC Racist Violence Against White South Africans: Since the end of the apartheid in 1994 and after the ANC came into power, laws were put in place to try to right the historical wrongs through various land reforms.

For example, if an African can supply proof his or her ancestors were buried on the land or that the family held it in control before 1910, they can file an ownership claim with the government.

If they win, the current landowners must sell the land back to the government, which will then give the land to the claimant.

These past efforts often have mixed results because, according to FarmFutures.com, “The new owner is often unprepared for the capital and equipment needed to farm the land; within a year or two the land ends up back in government hands and the original farmer buys it at a discount.”

In 2000, Mugabe forcefully seized land from mostly white farmers (a few black farmers who were critical of Mugabe were impacted too) without compensation for resettling poor black farmers. Some white farmers were beaten and killed, hundreds more were forced to flee to other countries.

In total, about 4,000 commercial farms were confiscated and redistributed to poor and inexperienced black farmers.

Prior to this land grab, the commercial farming sector provided 40 percent of Zimbabwe’s export earnings. Since the land grab, the agriculture sector has fallen apart. The production had dropped so much that Zimbabwe became a net importer of grain between 2000 and 2016.

After blaming bad weather and western sanctions for over a decade, even Mugabe admitted in 2015 that his land reform was deeply flawed.

Since Mugabe was ousted in 2017, new president Emmerson Mnangagwa has striven to revitalize the agriculture industry by acknowledging the chaotic and violent nature of the land reform that took place 20 years ago. He also promised to restore respect for property rights by offering compensation to wronged white farmers in order to lure them back.

The ANC Needs To Reexamine Its Failed Policies

Unfortunately, these real life lessons failed to register with the left-leaning ANC, the ruling party in South Africa since the end of apartheid in 1994.

Their socialist economic policies such as central planning, government subsidies and grants has lifted some black South Africans out of poverty, but the economic growth has been stagnant in the last decade.

The size of the South African economy in 2016 was about the same as in 2009. GDP growth in 2017 was only 0.3 percent, making it one of weakest economies during a time when there has been a worldwide economic expansion.

The poverty rate and unemployment rate have been rising. About a quarter of the nation’s 55 million people still don’t earn enough money to afford sufficient food.

Countries like China and South Korea turned their economies around within two decades through market-oriented economic reforms.

The ANC has been in power for a quarter of a century. South Africa’s economic woes today are largely the result of ANC’s failed economic policies.

The ANC today doesn’t have the same kind of moral authority as when it was led by Nelson Mandela. It has become a network of patronage and corruption.

Its policies enriched a few at the expense of its people. Its former party leader and former president of South Africa, Jacob Zuma, is facing 16 counts of corruption, money laundering and racketeering.

Yet, rather than examine its own failed policies, the ANC continues down the same path of blaming historical wrongdoings and inciting racial conflict to explain away their policy failures.

The vote to legalize land confiscation from white farmers without compensation is the latest example of the ANC doubling down on a wrongheaded economic policy.

As Friedrich Hayek said, “the system of private property is the most important guarantee of freedom, not only for those who own property, but scarcely less for those who do not.”

Until the ANC stops its war on race and property rights, it won’t turn the economy around.

Somehow the color of their skin makes their suffering less visible to most western politicians, human rights groups, and media.

The only strong response came from Australian Home Affairs Minister Peter Dutton, who called for plans to fast-track humanitarian based visas for white South African farmers who are being persecuted.

He was promptly called a “racist,” by some of his countrymen, liberal media and ironically, by South African politicians. Even some human rights groups argue that they can always find another group of people who suffer more than these farmers. Thus, these farmers don’t deserve any special treatment.

There is an active White House petition to call for immigration priority for these farmers. I hope President Trump will heed the call.

The U.S. should help them not because of their skin color, but because of the gross violation of their human rights and property rights, and our nation’s role as the beacon of hope for those who suffered persecution and injustice.

My only suggestion is that rather than offering them refugee visas, we should grant them skill-based immigration visas. These farmers have the skills and experiences we need and mostly importantly, they have the desire to work. They will be self-sufficient and make contributions to our nation rather quickly. What we shouldn’t do is continue to remain silent.