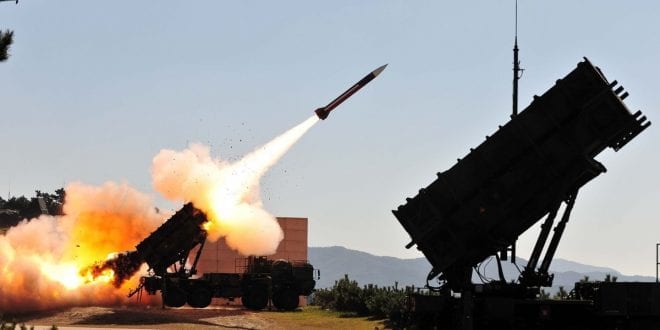 Are There Patriot Anti-Ballistic Missile Defense Systems in Iraq?

Herland Report: Certainly the US military limits information about the Patriot Anti-Ballistic Missile Defense Systems deployed at particular bases and quite rightly so.

However the US media has publicly stated that there are no Patriot missile defense systems at US military bases in Iraq. It’s important to know the truth, in consideration of the Iran strikes on US bases in Iraq on January 8th.

After 2004 good public info anywhere about US MIM-104 Patriot missile deployments got real scarce. And there are few sources willing to reveal themselves publicly to assert that the Patriot Anti-Ballistic Missile Defense Systems /MIM-104’s do exist at US bases in Iraq, even if they do exist, writes author and scholar on the US Monetary System, Steve Brown for The Herland Report.

Logically however the notion that the US government/military spends trillions on defense but does not have anti-missile defense systems at its military bases in a war zone, boggles the mind. And that is just what the public is expected to believe.

The argument from the DoD-linked analysts is that later MIM-104’s have been produced in limited numbers and are in such great demand elsewhere, for example in Kuwait and Saudi, they cannot be spared.

The argument that big demand for GEM-T / MIM-104’s prevents them from being deployed in Iraq is weak at best and more likely false, since the US has so many important bases in Iraq to defend.

Another argument is that the situation on the ground changed when the US war in Iraq supposedly turned to defeating ISIS and the army didn’t need the Patriot Anti-Ballistic Missile Defense Systems because ISIS had no ballistic missiles.

It’s exceedingly unlikely however that the Pentagon failed to appreciate the ballistic missile vulnerability of US troops in Iraq. And if the Pentagon has disregarded that vulnerability, then we have another and different outrage — one that should be in the public dialogue.

Furthermore, that the safety of Kuwait and Saudi Arabia is more important to the US Pentagon than the lives of US soldiers in Iraq, should put this in perspective for a president and people who constantly pledge their support to the US military.

So, it seems the MIM-104 controversy is deliberately ignored or dismissed by the western media, so the public will remain unaware of how US militarist policy is truly operating with regard to their many military engagements. And that the US deliberately stood down to allow Iran to strike its bases in Iraq is a notion difficult to swallow in the west.

But in this author’s considered opinion and research done, that is precisely what happened. It’s interesting too that no one has written otherwise – ie. that a US defensive stand down did not occur in Iraq – at least from all this author has seen and read.

The subject is important too, because the folks appearing on US media to tout war with Iran – like former government officials Stephen Hadley and Jeh Johnson – represent Raytheon and Lockheed Martin respectively and they produce the ABM’s.

But Johnson and Hadley both failed to divulge their defense industry ties while touting war in their interviews with the US media. And the same Washington Post media proposing that Patriot MIM-104’s do not exist on US bases in Iraq is the very same media touting for more missiles and more militarist expenditure.

Once again, the media’s message is for taxpayer’s to hand over their money to the military while touting “nothing to see here, move on.” One can only wonder for how long we will just keep “moving along” with that message.