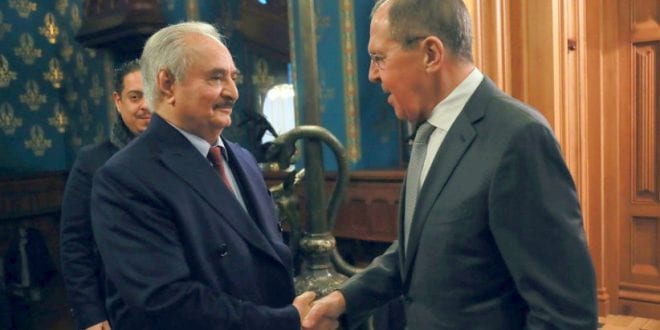 Russia’s Big Gamble in Libya, all about who controls resources: An analysis

Herland Report: First, the background. When the United States abandoned the Iran agreement, that left Turkey’s oil imports adrift due to newly imposed US Treasury sanctions on Iranian oil exports.

By December 2018, Turkey was forced to look elsewhere for its oil imports with Libya being the most logical choice by price and proximity, despite the violence there.

Recall that Tripolitania (west) and Cyrenaica (east) are at war, and Cyrenaica has its own oil production and storage terminals in the east while most proceeds (for both belligerents) in the Libyan conflict are settled by Libya’s National Oil Company.

But little of that mattered to Turkey’s oil import market and Turkey signed an energy corridor agreement with Libya. Then in April of 2019, the Libyan National Army’s offensive versus Tripolitania’s Government of National Accord (GNA) began, resulting in the fall of Sirte early this year.

After the fall of Sirte LNA forces were approaching Tripoli. The LNA had taken most of Tripolitania with only GNA pockets remaining. So the GNA’s situation was precarious by November.

It seemed as if LNA victory was assured and civil war in Tripolitania would be the grim result. Then with some urgency, Turkey promised to deploy troops to support the GNA.

Turkey’s foray into Libyan oil ran into trouble by June of 2018. Turkey objected to LNA rogue oil deals free of NOC oversight, where the NOC’s mandate was to enforce the UN arms embargo by disbursing funds only for civilian government use.

Then the LNA’s April offensive resulted in air strikes on Misrata and the west, impacting Turkey’s oil imports. The fall of Sirte and LNA strikes on NOC offices and the Zawiya oil terminal late in 2019 dealt serious blows to Turkeys’ oil ambitions in Libya.

Warlord Haftar’s LNA advance was assisted by the United Arab Emirates, Egypt, and France. Then, Algeria experienced a change in leadership and joined the fray.

Algeria aligned with the GNA versus Haftar’s LNA (recall that Haftar is backed by France) while Algeria publicly condemned the Turk troop deployment. Algeria is an oil power and has oil interests in west Libya too and wields more influence in the Mena than commonly perceived, usually in the background.

Now, after the fall of Sirte LNA forces were approaching Tripoli. The LNA had taken most of Tripolitania with only GNA pockets remaining. So the GNA’s situation was precarious by November.

It seemed as if LNA victory was assured and civil war in Tripolitania would be the grim result. Then with some urgency, Turkey promised to deploy troops to support the GNA.

Rumors held that Algeria’s troops would secure its border and its oil interests in Libya, too.

By January the extreme gravity of the situation was apparent. The threat verged on a humanitarian disaster. Tripolitania anticipated destruction at Haftar’s hands, while Europe, Turkey, and Greece would face a new wave of Libyan migrants. Algeria must foresee the necessity to close its extended border by further force of arms, and to assist Tunisia, thus exacerbating tensions with Morocco. Only a respected power with authority and regional influence could salvage Libya from impending doom.

The power to save Libya from more violence was not the United States — which caused Libya’s catastrophe in the first place — but Russia. Russia and Turkey called for a cease-fire. At first Haftar resisted that call since he could smell victory. But Haftar eventually relented and agreed to the cease-fire at Russia and Germany’s insistence, although he has not yet signed it. Several unknowns arise.

How the various fractured groups and militias populating Misrata and Tripolitania might align is unclear. In Misrata and Bani Walid, a militia may take one allegiance or another… or no side at all. Some groups are well-armed and may engage in rogue attacks simply to disrupt the cease-fire.

Next consideration is Turkey which seems to be removing itself evermore from Washington’s orbit. A defacto removal of Turkey from NATO will call into question the credibility of an already questionable alliance. Perhaps Washington will retaliate with more sanctions versus a perceived NATO ‘rogue’ member? And will Turkey abide by the ceasefire too?

John
Steve Brown is the author of “Iraq: the Road to War”, editor of “Bush Administration War Crimes in Iraq”, “Trump’s Limited Hangout” and “Federal Reserve: Out-sourcing the Monetary System to the Money Trust Oligarchs Since 1913”; Steve is an antiwar activist, a published scholar on the US monetary system, and has appeared as guest contributor to The Duran, Fort Russ News, Strategika51, Herland Report, and the Ron Paul Institute.