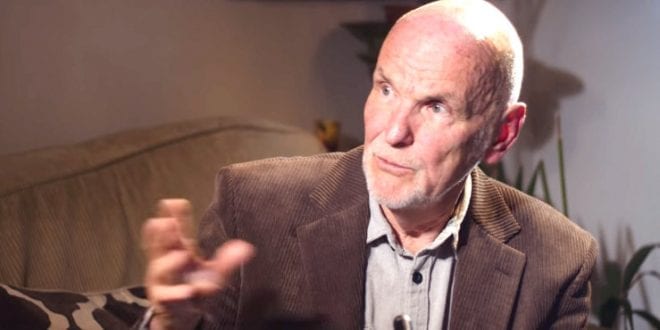 The Islamic Human Rights Prize, Teheran 2018 , has been given to one of the most vocal Norwegian Muslims, Dr. Trond Ali Linstad, for his relentless work for the marinalized in society and those who suffer. He has been the leader of the Palestine movement in Norway. He shares it with Sheikh Ikrama Sabir, Jerusalem/Al Quds.

He is one of the few Muslims who openly and publicly teach respect for the Quran and Muslim dogmas in Norway. Dr. Linstad travelled to Teheran in order to receive the prize. Please read excerpts from the speech held in Teheran on August 5th, below.

It is a great honour for me to be awarded the fourth Islamic Human Rights Prize. My sincere thanks to The Judiciary of Islamic Republic of Iran, High Council for Human Rights, His Excellency Mohammad Javad Larijani, Secretary of the Council.  I great you as a Norwegian; coming from Norway – a small country rather far from here, up north, a part of the Scandinavian countries.

In geographical terms there is some distance between The Islamic Republic of Iran and Norway. When it comes to the people of this country and of my country – Muslims and nonMuslims – there is a common interest to work for victims of human rights abuses and defending or promote these rights. This is a most important task.

A reference to the Holy Quran, in the description of how Humanity was created:
«O mankind! Be mindful of your Lord, Who created you from a single soul and from the same essence created its mate, and from the two spread countless men and women far and wide. » (4.1)
All Humanity was created from the same essence, and was spread in multitudes over the earth. We are basically, all of us of origin; brothers and sisters.
There is a saying from the Holy Prophet Muhammed:
«All creation is children of Allah, and the one caring for Allahs children, is nearer to Allah.»
A saying from Imam Ali:
«The other person is either your brother or sister in the faith, or your kind (brother or sister) in Humanity. »
In Islamic: Care shown to Mankind will give care in return.

 Islam teaches that all men are equal in terms of basic human dignity. o Islam forbids discrimination on the basis of race, colour, language, belief, sex, religion, political affiliation, social status or other considerations.  Islam proclaims the sanctity of life. o Islam declares the preservation of human life to be a duty.

 Islam prohibits any form of compulsion in order to convert a person to a religion or to atheism. o Islam respects individual reasoning and considerations to find the right way.

 In Islam is emphasized the full right to freedom and self-determination. o Islam opposes enslavement, oppression, exploitation, and colonialism. o The same is for imperialism, great power interference and disrespect for national rights.

 Islam has established the rule of law. o Islam stresses that equality and justice be for all.  Islam guarantees all individuals the right to participate, directly or indirectly in the administration of his country’s public affairs.

Islam gives everyone the right to express his opinion freely in such manner as would not be contrary to the principles of Islamic morals and regulations. o Islam will not permit propagating nationalistic hatred or racial discrimination.

Islam considers national sovereignty and independence for oppressed peoples part of their human rights.  Islam supports the struggle for freedom and independence of peoples, occupied, exploited and threatened by aggressive and foreign powers.  Islam is for justice and peace.

«The believers, both men and women, support each other. They order what is right and forbid what is wrong.» (The Holy Quran 9,71)
«Peace be upon you, respected ladies. May the mercy of God be upon you, lion-hearted women (…) May God (…) be pleased with you.» (Imam Khomeini)

In Norway is a rather strong solidarity movement for Palestine, with opposing the Zionist state of Israel. Religious and non-religious, Muslims, Christians and secular citizens and organizations have started to understand the real character of the State Israel as a Zionist, occupying and illegitimate state, crippling Palestinian rights.
There are meetings, seminars, demonstrations. Medical teams and other assistance have been sent by friends of the Palestinians in Norway to Palestine and to Palestinian institutions.