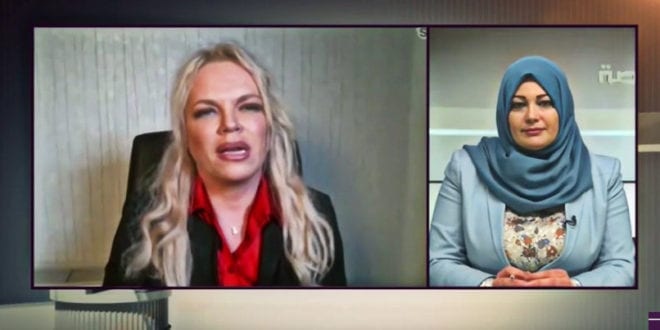 Herland Report: Hanne Nabintu Herland TV interview Libya24: The Libya24 interview on my analysis on the possible solution to the Libya crisis has now been shown on TV in Libya a number of times, reportedly from Libya24 with enthusiastic reviews and response.

Only on “The Herland Report” Facebook the interview reached 1 million, with 12000 likes on the interviews and the Foreign Policy Journal article “Could Muammar Gaddafi’s son Saif al-Islam solve the Libyan crisis?”

It is touching to read the hundreds of Facebook comments from ordinary Libyans, Syrian, Americans and others, both from the Foreign Policy Journal article respons on Facebook, as well as the Libya24 TV interview, both in English and Arabic.

The analysis on Libya and the possibility of Muammar Gaddafi’s son Saif al-Islam to reunify the Libyan nation has been republished all over the world. In India, Vietnam, Asian nations,in Africa and leading Libyan newspapers, a number of places in the US, in Germany and Italy – as well as a broad interview with Italian L’Indro newspaper. It is, I hear, soon to be published in South America in Spanish.

It is touching to be in direct contact with thousands of Libyans who have been the direct victims of the NATO backed military coup in 2011, which failed so totally to bring peace to Libya but rather brought a brutal civil war.

These are people who live far from the safe European and Scandinavian reality, and therefore – probably understandably – do not engage many of us.

Still, countries such as Norway has a special responsibility since we so willingly bombed Libya in 2011, a responsability which the current government or the previous one show no willingness whatsoever to take.

We bombed Libya and actively participated in destroying the richest state in Africa, a socialist welfare state rated as a middle income country by the UN. Libya under Gaddafi was far from perfect, yet everyone had a job, lavish benefits, around 50 000 USD benefits to newly weds, in a well-functioning state with free education for both men and women.

In the past, we have heard little about how well ordinary citizens lived under moderate muslim Gaddafi, but we only have been served the sunni-wahhabi, Saudi narrative through Western media.

Our leading media still solely attack the moderate muslim groups and power structures in the Middle East – such as President Assad in Syria, for one. The solely and only narrative and version of Middle East reality we hear about in the leading Western media, is the sunni-extremist, Saudi Arabian version.

Who knows how the islamist movement was able to infiltrate and push its world view through the mainstream Western media. A suggestion is, of course, its close relation to the US government and thus the ability to colour their world view. And money talks, the lavish million dollar payments from countries such as Qatar, Saudi Arabia and Norway into the privately owned family foundation of the Clintons, The Clinton Foundation, also may explain how the Saudi narrative became the mainstream Western narrative.

The remarkable Western media focus on solely reporting on the Middle East from the sunni-islamist angle, while chronically pushing down the moderate muslim voices and structures, is indeed surprising.

Thus, the impression is set that the whole Middle East solely consists of “terrorist Muslims” – the view which is chronically portrayed in mainstream Western outlets.The Saudi narrative becomes the Western narrative, we are allies, we work together for the same goals in the Middle East: The eradication of moderate muslim groups as well as minorities, Christian, Druze, Alawite and others.

Read the comments from Libyans and others on Facebook, also the many on the Foreign Policy Journal article. Libya is a nation that should interest us, but it does not, probably as it reminds us of our own nations’ brutal attack and destruction of this state in 2011.