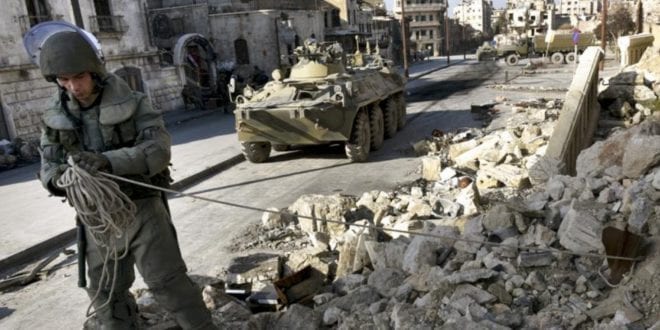 Private Armies and the Wagner Group? …all about the Oil

Herland Report: Steve Brown: Long before and ever since the Blackwater Nisour Square massacre, the United States has employed contractors to pursue any particular US military agenda so desired, just about anywhere.

However, under US law – depending upon who interprets it and when – US military contractors are not allowed to engage in aggression.

Of course, the perception of “armed aggression” versus “self-defense” varies markedly, especially depending upon who or whom – ie which side – is doing the perceiving. The line between mercenary and contractor is indeed fine.

Besides the Nisour Square massacre, plenty of evidence exists that US military contractors do participate in military offensives, and invariably there is no independent observer to determine otherwise.

The United States military employs contractors to train and instruct foreign troops in the use of arms and combat too, a technicality not addressed by the Anti-Pinkerton Act, writes anti-war activist and published scholar on the US monetary system, Steve Brown. He is a regular at The Herland Report.

WIKIPEDIA: The Wagner Group (Russian: Группа Вагнера, tr. Grupa Vagnera), also known as PMC Wagner, ChVK Wagner, or CHVK Vagner (Russian: ЧВК Вагнера, tr. ChVK Vagner, Russian: Частная Военная Компания Вагнера), is a Russian paramilitary organization. Some have described it as a private military company (or a private military contracting agency), whose contractors have reportedly taken part in various conflicts, including operations in the Syrian Civil War on the side of the Syrian government as well as, from 2014 until 2015, in the War in Donbass in Ukraine aiding the separatist forces of the self-declared Donetsk and Luhansk People’s Republics.

Furthermore, the United States and its contractors are thieving oil from the Northeast on behalf of the Kurds, and the US no right to that oil. That’s because the agreement for Syrian oil is between the legitimate government of Syria and Russia… not with the United States.

The Battle for Conoco in Syria occurred on 7 February 2018 when the Syrian government attempted to recover the Conoco gas plant east of Deir Ezzor, from YPG forces and US Special Forces, for Syria.

Heavy fighting resulted in casualties on both sides, even though the New York Times denied reports that SDF or US troops or its contractors were killed or injured in the firefight.

Meanwhile the New York Times reported that at least five ‘Russian mercenaries’ were killed in the attack, and possibly dozens more. According to a reliable source, as many as 95 fighters for Syria – some from the Wagner Group – may have been killed or wounded in the Conoco gas plant attack.

Whether Russians employed by the Wagner Group were killed or not, the hypocrisy of the major media covering the Wagner Group like some sort of nemesis similar to ISIS is not only astounding, but cannot be ignored.

To highlight the point, the New York Times and western media characterizes the Wagner Group as consisting of Russian mercenaries, but how are we to know that they are Russians? …perhaps some are Americans. Does it matter?

After all, mercenaries are mercenaries, and mercenary groups are never strictly homogeneous.

Meanwhile the major media characterizes Triple Canopy, Academi, Unity Resources, KBR, BLP, DynCorp, ArmorGroup and a myriad of other paramilitary groups (operating for-profit and for-hire) as “military contractors” and not mercenaries… whether they operate in Iraq, Syria, Lebanon, Afghanistan, or Yemen, or anywhere else that the western Axis powers has targeted.

To push the point further, since we have established that US military forces and their contractors are in Syria illegally, they are insurgents in Syria by contravention of international law, and by definition.

Therefore, those insurgents are fair game for the Syrian government, exercising the people’s right to self-determination. That Syrian self-determination is valid not only versus the US insurgency, but versus a terrorist group in the Northeast, claiming its own non-viable non-workable state by violent means.

By that logic, Syria and its allies – whether ‘mercenaries’ or not – have every right to defend themselves, versus the insurgent US and its erstwhile ally the YPG.

To add to the irony, the United States portrays itself as the “shining light” while shamelessly employing such aggression in Syria and Iraq via its own mercenary hires.

And that US aggression is still about the oil. The undeniable fact is that the United States has taken the same oil from Northeast Syria that it claims ISIS took. Mr Trump even said so:

Thus, at one stroke, Donald Trump just unwound any courageous action he undertook in attempting to remove US troops and mercenaries from Syria.

Besides further demonstrating US hypocrisy and the inability of anyone to withstand the Deep State, this move by Mr Trump must alienate a large portion of his base, and even provides an opening to his opposition.

Meanwhile the Syrian fight continues. Syria continues to resist the occupation of their land that US State so ignominiously began (with Israel) in 2011, and the western media will certainly continue to portray Washington’s vast plethora of for-profit US mercenary corporates there as “military contractors”.

Any other entity not within that realm or opposed to it, will be labeled as “Russian mercenaries” to be considered as lowly a group as ISIS.

Back to the Conoco conflict, there is a better explanation. According to most accounts, even if questionable, the US checked with Russian partners about Russian forces being present there before engaging in the firefight at the Conoco oil plant.

And that’s because the Wagner Group indeed does not report to the Russian military. But yet… with manic Russiagate hysteria ever-present and undying in the western major media, we will never know for certain.