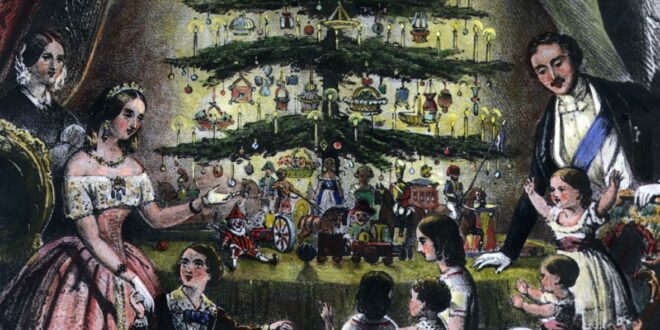 The Evergreen Tree and Christmas: Many allege that these traditions stem mostly from pagan or secular practices, and very few, if any, from Christianity – again, rendering Christmas into a generic holiday unspecific to Christianity.

Let us begin by revisiting how Christmas was initially commemorated.

The answer is found in Orthodox Christianity, where the traditions of the ancient Church are still practiced to this day, writes editor of Strategos History, author Simon Vincent.

It begins with an Advent Fast of 40 days prior to Christmas Day, where worshippers abstain from certain foods and drinks.

The Fast is designed to cultivate a prayerful and charitable state, anticipating Christ’s Birth.

Why we celebrate the Birth of Jesus

The Evergreen Tree and Christmas: On Christmas Day, they hold a Divine Liturgy in Church and then break the fast with a celebratory feast, often with the extended family.
The following 12 days (25th December to 6th January, the Feast of Theophany) are cheerful and festive to reflect the joy that Christ – in other words, hope for salvation – has entered the world.

In the Church calendar, Christmas is the celebration of the Birth of Jesus Christ. For Christians, it is an event of existential importance.

It reveals the wonders of the nature of God – an event where the Word of God entered the world by taking on human nature and sanctifying it, giving each man the hope of sanctification and reconciliation with God.

The necessity of this Birth of Christ for the human race is encapsulated by St. Justin Popovic’ (d. 1979) words:

“In truth God as a man was born on earth! Why? That we might live through him (1 John 4:9). For without the God-man, the Lord Jesus Christ, human life is wholly and completely a suicidal absurdity…Your life, O man, can find its only reasonable, rational, logical meaning in God alone…”

“Through His incarnation, through becoming man, becoming human, has God in the most manifest way entered into the very womb, the very bowels of human life, into the blood, into the heart, into the center of all existence…”

“God’s incarnation is the greatest upheaval and the most providential event, both on Earth and in Heaven.”

Why Christmas and the evergreen tree?

The Evergreen Tree and Christmas: However, with the advent of the Protestant Reformation in 1517, most of Northern Europe gradually departed from this ecclesial tradition. This opened up for new traditions to take precedence.

The use of a Christmas tree gained traction in Germany and Holland at this time.

It allegedly originated with Martin Luther, who is believed to have erected an evergreen at his home and decorated it with candles and a bright star at the top, probably symbolizing the night sky and the Nativity star that guided the three wise men in the Gospels (Luke 2:1-19).

Many also saw it represent both the Tree of Knowledge (that led to the Fall of Man) and the Tree of Life (the cross of Christ, which led to the Salvation of Man).

Yet, some claim that the Christmas tree was originally a heathen invention. Germanic pagans usually performed rites around sacred oaks, and Norsedom contained a belief in Yggdrasil, the tree that holds the world.

The evergreen, in particular, has also been a universal symbol of eternal life for many unrelated cultures (since it stays green over winter).

Be that as it may, this does not mean that any and all symbolic uses of a tree will always stem from pagan witchcraft. Such a claim would need real evidence, but there is simply none to suggest that the Christmas tree became fashionable due to old pagan oaks. So far, it remains mere speculation.

Nevertheless, the Christmas tree was not a defining feature of Christmas until the mid-19th century. In 1848, the German-born Queen Charlotte of Britain published a Christmas greeting depicting her family around a Christmas tree.

The Evergreen Tree and Christmas: The Royals were influential trendsetters, and so this image created a widespread craze for Christmas trees. By the late 19th century, it had even spread to Britain’s former colony, the United States, which globalized it with its powerful media muscles.

When we then visit the history of other Christmas traditions – singing carols, kissing under the mistletoe, candy canes – we find the exact same pattern of development.

They often had an obscure origin but became widely popular in Protestant countries in the late 19th century, and then made mainstream by American media.

Previous The Conservative philosopher Edmund Burke: We need to resist the passionate calls for revolution
Next The correlation between Social Disorder and Christian Decline