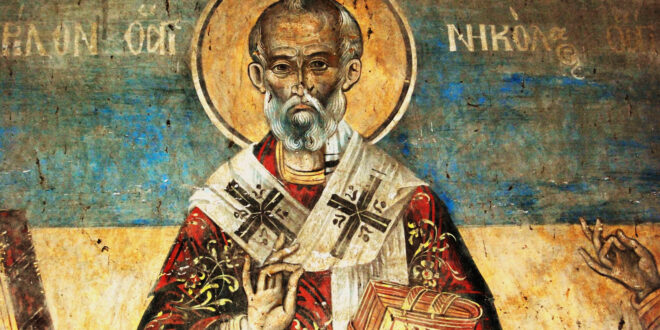 St. Nicholas: Today, Christmas is mostly associated with Santa Claus, decorative trees, gift-giving, and a time for relaxation in the Liberal, commercialized West. But where does this holiday – and its beloved traditions – come from?

Initially a Christian feast celebrating the birth of Jesus Christ, it has been appropriated by secular forces to be expanded into a generic holiday that serves consumerism and pop culture more than it does Christ.

In the United States alone, $1 trillion is spent every year on Christmas gifts and festivities, and 2/5 of spenders go into debt to meet the holiday expectations, writes editor of Strategos History, author Simon Vincent. Follow Simon Vincent’s work, exploring humanity through history and philosophy, here.

Christmas, it seems, is gradually becoming more of an opportunity to satisfy our appetites and desires, than it is to be reminded of the Gospel message.

It has become a time for unrestricted indulgence, all in the name of “Santa”, who has become a bizarre, pop-culture fixation that works excellently in retail markets.

To save Christmas from degenerating into meaningless indulgence and consumerist hell, we need to re-examine its roots. We need to find the origin of the feast, how it developed, and what message it conveyed.

Why celebrate the Nativity of Christ?

St. Nicholas: In the Church calendar, Christmas is the celebration of the Birth of Jesus Christ. For Christians, it is an event of existential importance. It reveals the wonders of the nature of God – an event where the Word of God entered the world by taking on human nature and sanctifying it, giving each man the hope of sanctification and reconciliation with God. “He was made man so that we might be made Divine,” said St. Athanasius of Alexandria (296 – 373).

The necessity of this Birth of Christ for the human race is encapsulated by St. Justin Popovic’ (d. 1979) words:

“In truth God as a man was born on earth! Why? That we might live through him (1 John 4:9). For without the God-man, the Lord Jesus Christ, human life is wholly and completely a suicidal absurdity…Your life, O man, can find its only reasonable, rational, logical meaning in God alone…Through His incarnation, through becoming man, becoming human, has God in the most manifest way entered into the very womb, the very bowels of human life, into the blood, into the heart, into the center of all existence… God’s incarnation is the greatest upheaval and the most providential event, both on Earth and in Heaven.”

Initially, Christians celebrated this existential revolution on Sundays and at Pascha (Easter), but soon, other feasts were added to the calendar.

The Feast of Theophany on January 6th initially celebrated Christ’s Nativity and Baptism together, but subsequently, Christians began dedicating a special day for His Nativity – 25 December.

Perhaps the most curious case: Santa Claus. The fantastical fat globetrotter who puts gifts in children’s stockings on Christmas Eve – where (and why) did that come from?

St. Nicholas: The story of Santa Claus begins with Saint Nicholas (270-343), one of the greatest Church Fathers and Saints in Christianity.
When his parents died, St. Nicholas inherited large sums of money, but used it to help the poor, hungry, orphaned, and sick.
Whenever he helped someone, he did it in secrecy, so that only God would see his deeds and he could avoid popular praise.

For instance, there was once an old man who was so desperately impoverished that he had decided to send his three beautiful daughters to the street to earn a wage.

When St. Nicholas heard of this, he went out at night in secrecy and tied three stockings filled with gold coins by their window.

In this way, he saved the family from ruin. Many probably recognize what Christmas theme this story later inspired.

St. Nicholas’ feast day in the Church calendar is on 6 December, and it was popular to give gifts to little kids in memory of the gracious bishop (gift-giving to children is also associated with St. Basil the Great’s feast day on 1 January). St. Nicholas himself urges: “The giver of every good and perfect gift has called upon us to mimic His giving.”

However, in the Protestant Reformation of the 16th century, Martin Luther sought to move the tradition of gift-giving from St. Nicholas’ feast on the 6th to Christ’s Nativity on the 25th, as the Reformation sought to end the veneration of Saints.

Thus, in Northern Europe, the Nativity feast and St. Nicholas’ gift-giving were joined into one holiday on the same day.

As the memory of St. Nicholas’ Sainthood faded in the Protestant world, the figure of St. Nicholas was increasingly susceptible to new characterizations and old folklore.

In England, Father Christmas was trending as a literary personification of the festive Christmas spirit – most famously exemplified in Charles Dickens’ A Christmas Carol (the Spirit of Christmas Present).

Meanwhile, in North America, references to the gift-giving St. Nicholas were abbreviated to “St. Claus”, from the Dutch Sinterklaas. Children would hang up stockings on Christmas Eve and wait for “St. Claus” to fill them up with goodies.

In the 19th century, the Americans produced two decisive works that cemented the modern re-shaping of St. Nicholas: (1) A Visit by St. Nicholas (‘Twas the Night Before Christmas) by Clement C. Moore in 1823, and (2) a published and widely distributed illustration of “St. Claus” by Thomas Nast in 1863.

This was a very silly characterization, and therefore became very popular for amusement and humor.

By the turn of the century, numerous children’s books were written on the hysterical figure.

In the early 1930s, The Coca-Cola Company picked up on the trend and used Santa Claus to promote their brand to kids. Disney exploited the same phenomenon.

Thus, with massive financial capital for global advertising, the secular creation of Santa Claus was complete.

What originated with a charitable, holy bishop who rescued the downtrodden from deprivation was converted by modernist forces into a plump, goofy gift-giving fascination.

“Santa” is thus a modern creation, only about 120 years young, while St. Nicholas lived 1800 years ago.

Rekindling the flames of the Nativity

St. Nicholas: What we have before us is a drastic reinvention of Christmas over the past 150 years. It has been refashioned to accommodate our unquenchable desires and to reinforce commercial interests on a global scale.

Santa Claus has replaced Christ. And so, alcoholic excess and lavish gluttony have replaced the humble Nativity Fast.

Obsessive materialism in the form of stress-inducing gift shopping has replaced charitable care for the poor and sick. A season for 1 trillion dollars in revenue has replaced a season for spiritual reconciliation with God.

It is actually the modern man that has copied pagan Saturnalia and called it Christmas.

For there is now very little difference between this modern “winter holiday” (as the conglomerates have begun to call it), and Roman Saturnalia.

In a twisted way, the modern man desperately looks for pagan influences on the early Christians as means to justify this reinvention. But he finds none, as we have seen.

We may conclude in the same way the early Christians did: let Saturnalia be for the pagans, but let the Christians celebrate Christ’s Nativity.

We can heed the counsel of St. Gregory of Nazianus (325-390), equally effective in ancient times as it is today:

“Let us keep the Feast [of Christmas], not after the manner of a heathen festival, but after a Godly sort; not after the way of the world, but in a fashion above the world; not as our own, but as belonging to Him who is ours, or rather as our master’s; not as of weakness, but as of healing; not as of creation, but of re-creation.”

Santa Claus as the Hypostasis of Christmas (substack.com)

How much we spend at Christmas around the world | World Economic Forum (weforum.org)

The Plagiarism of the Date of Christmas | ORTHODOX CHRISTIANITY THEN AND NOW (johnsanidopoulos.com)

Loosing the Riddle of Clement Alexandria’s Date for the Nativity, Baptism, Passion, and Epiphany of Christ (dec25th.info)

Previous Christmas: Jesus is voted the most significant person in world history
Next The Greatest Gift For All: God so Values the Individual’s soul that he Sent his Son to Die so we Might Live