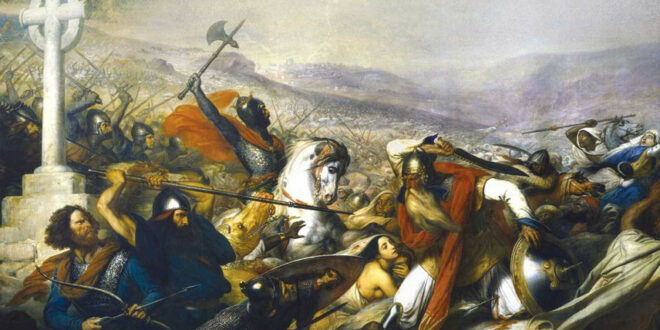 “In a brilliantly written and highly dramatic book, Raymond Ibrahim brings
to life eight Christian heroes who stood up against evil and injustice to fight
for human dignity and the Christian faith in various theatres of war.

Remarkable tales from a time of massive upheaval—not unlike our own age. While the book outwardly documents a history of fierce warfare, it also manages to invoke matters of the heart that are relatable to the average reader,” writes Hanne Nabintu Herland, African-born historian of religions
and bestselling author in Norway.

“Military historian Raymond Ibrahim is of Egyptian origin, fluent in Arabic,
and an expert on the centuries-long armed conflicts between the West
and Islam,” comments the National Association of Scholars.

“Defenders of the West is engaging storytelling of fascinating people and forgotten events at its best.

Although anchored in arcane or archaic texts, it
reads and flows like an adroitly crafted novel, buttressed by a scholarship
that allows those of the past to speak for the past”, writes Senior Fellow at Hoover Institution, Victor Davis Hanson, in the foreword.

“Relying primarily on contemporary sources, Raymond Ibrahim vividly tells
the story of ‘eight eminently violent men’ who played leading roles fighting
Muslims back in the era 1100–1500, when Christianity was a ‘muscular religion.’

By recalling those exploits, the author hopes not just to pay tribute
to distant accomplishments but to inspire today’s Christians again to ‘stand
against Islam,’” writes president of the Middle East Forum, Daniel Pipes.

Defenders of the West against Islam: “For two decades, Raymond Ibrahim has been one of the few historians telling us the truth about Islam and its thousand-year assault on the West. With narrative force, clarity, and a command of primary sources, his new book Defenders of the West tells the story of that millennium of aggression and the heroic resistance that saved the West from its oldest enemy,” comments Bruce S. Thornton, Research Fellow at Stanford’s Hoover Institution.

Read World Net Daily about the book here. Excerpts from the article:

What is remarkable about The Defenders of the West is that it documents a history of fierce warfare and heroic Christian warriors, yet manages to invoke matters of the heart as it addresses the quest for justice, the willingness to protect the population from atrocities and the choice to give one’s life for one’s country.

The sacrifice, the humility, the relentless work to protect their Christian homelands and their religious faith invoke admiration.

These were the lives of El Cid, Richard the Lionheart, the Romanian hero Vlad the Impaler, popularly called “Dracula” Son of the Dragon of whom we have quite a Hollywood-distorted view, Godfrey of Bouillon, John Hunyadi, and the Albanian ‘braveheart’, Skanderbeg.

Ibrahim says that Skanderbeg has arguably been the most celebrated throughout Europe. In the centuries following his death, more than one thousand books in over twenty different languages, operas and plays, were written about him.

The Romanian hero, Vlad the Impaler, fought to retain the Romanian borders against the Ottoman invaders, stating that the Turks were the “cruelest enemies of the Cross of Christ”.

Having gained a remarkable notorious reputation, Vlad the Impaler was nonetheless able to force the Turks to retract, and his remorseless defiance stopped the Islamic conquest into Romania. These are but examples of how famous these men were, in an age that is mostly forgotten in the Western heathen, liberal hegemony of today.

Previous NEW BOOK: The Violent Defenders of the West by Raymond Ibrahim
Next Brilliant Analysis on How US Economy Was Destroyed and the One Percent Tyranny Implemented