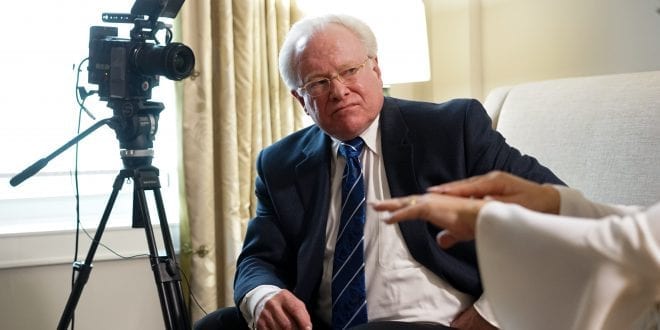 TV interview with Chuck Crismier: How Feelings and Psychology is destroying our Culture

Herland Report TV host, Hanne Herland speaks with Chuck Crismier about the media demonization of Christians, psychology and the religion of feelings.

As the traditional, Western worldview is scrapped and atheist Marxism implemented, historic values evaporate such as self-control, civility, politeness and respect for diversity and the right to differ in opinions.

“The media is not interested in promoting anything related to the Christian faith, and only demean. If they see anything positive, they are not going to report on it because it goes contrary to their agenda,” says Dr. Chuck Crismier, a veteran attorney, author of several books, pastor.

Chuck Crismier is a nationally syndicated radio host, probing below the surface and dealing with issues that few dare to touch –  matters of the heart.

As Americans turn to Marxism in the hope of a better and more just world, the Soviet atheist experience is a reminder of how it ends when humans attempt to control every aspect of human life.

Free speech – or the concept of allowing an honest public discourse that respects differences of opinions – was forbidden in the Soviet Union.

In the Soviet Union, children were taught, much like students in the West today, that atheist Marxism leads to a classless brighter future without racism or injustice towards minorities.

Dr. Crismier says in this Herland Report TV interview: “The media agenda in the West is to promote a godless version of life in the Western world. Anything else is deemed to be hateful. So, the whole concept of hate has been redefined. Completely redefined. The whole concept of tolerance has completely been redefined which affect so many areas of our life. It includes the whole idea of free speech. The media is not interested in free speech.”

“The media is only interested in free speech for themselves and those of their particular godless like. They are interested in accomplishing just the opposite of a society that believes in the ten commandments.”

“Since the 1960s we have had a monstrous revolution in the West. It was a moral, spiritual and sexual revolution – also surrounding the Vietnam War. But, it was far more than that. The real revolution was a revelry against all authority. It was the progressive abandonment of all authority.”

“Let’s take a look at what happened in our churches as a result of that. In the 1970s, the divorce revolution started with Ronald Reagan who gave us no fault divorce in 1968. As a result of that, our pastors in churches began to adopt the idea that God’s ultimate good for us was happiness. Not holiness but happiness. The Bible said be holy. We were saying: be happy.”

“It was linked to the infusion of psychology. In the 1960s, psychology began to be infused into every single aspect of our culture. Even in our churches.” “The foundation of our country used to be on faith. Now it was being shifted to feelings.

Feelings replaced faith gradually. Not just in the country as a whole, but into our churches.

Before we were about showing our faith, living out our faith ideals as best we could in truth, honesty, integrity, compassion, love, mercy and forgiveness. Now, even in our universities, the whole training of teachers went upside down.

I was a teacher for 9 years in Southern California before I practiced law. They began to train us in what was called the encounter movement. You no longer express, in a conversation, things that we were doing there, talking about facts and so on. No, everything had to be rephrased as “I feel”.

“If you take the lordship of feelings and implement that over a period of decades, how it affects the life of a country, it doesn’t take a Philadelphia lawyer to figure it out: This is a serious thing. Feelings have become our Lord. The Lord Jesus Christ has become little more than a mascot even in his own church.”

Noteworthy, in Soviet Union the atheist repressions led to massive Orthodox Christian revivals. Some opposed the system even then, many of whom were exiled to places far from Moscow, such as the deeply Christian man, Nobel Prize laureate 1970, Alexandr Solzhenitsyn, who was forced to live for many years in Kazakhstan.

He explains how the totalitarian experience with atheist Marxism led him to embrace Christianity, like so many others inside the totalitarian Soviet system. None of this was, of course, reported on in the strictly controlled Soviet media.

The level of censorship in social media and search engines is all-time high. Do like thousands of others, subscribe to The Herland Report newsletter here! Led by Scandinavian bestselling author, Hanne Nabintu Herland, The Herland Report news and opinion website provides independent analysis from leading Western intellectuals and ground breaking YouTube interviews, cutting through the mainstream media rhetoric. It is a great place to watch interviews and read the articles of leading intellectuals, thought leaders, authors and activists from across the political spectrum. The Herland Report believes in freedom of speech and its editorial policy resides above the traditional Left vs Right paradigm which we believe has lost its relevance and ability to describe the current driving forces in Western politics.
Previous American Education: Child Indoctrination to hate what made America great is killing the nation
Next Cultural Marxism Origins: How its Disciples Subverted America