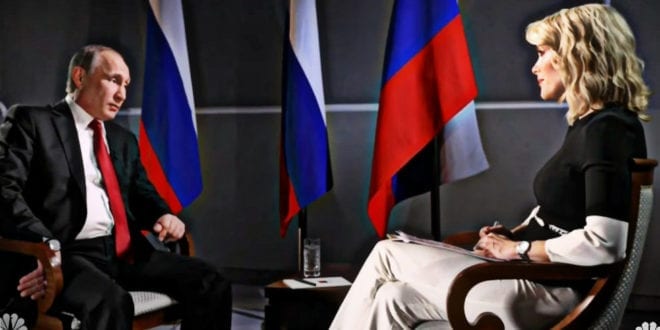 Russia Gate hoax Megyn Kelly and Putin: It reminds me of anti-Semitism: Jews are blamed for everything

We revisit the “RussiaGate” allegations that turned out to be a hoax. When NBC’s Megyn Kelly was invited to be the moderator at the 2017 St. Petersburg International Economic Forum, Putin gave a firm reaction to the allegations of “Russian involvement in the US 2016 election”.

So, as the Jews were blamed and still are by many today for “everything” that goes wrong under the sun, the Russians now have joined them in that particular role. When facing corruption or the misuse of power in the West – just blame the Russians. Problem solved. Megyn Kelly was later removed from the position at NBC.

Senator Rand Paul demanded the investigation of the Obama aides who pushed the Russia Gate conspiracy hoax to the public, and rightfully so.

Those responsible for spreading the Russia Gate hoax should be held accountable and tried for treason, defaming America’s democratically elected top official and tainting the nation’s reputation all across the globe.

Megyn Kelly even went to Russia to discuss “the meddling” with president Putin, who has been remarkably silent, the poor man, probably thinking that the Americans have gone completely mad. After all, Russia has an economy about the size of Italy, struggling internally with numerous issues, corruption for one, suddenly being elevated to “enemy of the world” in a media stunt that only ends up shaming the West so totally.

In case anybody wonders, we look like idiots to the Russians, not even being able to stop this embarrassing story before.

Russia Gate goes down in history as a remarkable display of Western stupidity. And the world is watching our brave new world fall to pieces.

The Megyn Kelly 2017 interview with Putin, where it looks like she has not even prepared for the conversations by reading the reports in question, simply confirms her role as the stupid American in the room.

Even before this new nail in the coffin of the notoriously lying mainstream media, 77 % of the American public believes that the media does not speak the truth.

Wonder what it will drop to now. How can the media editors live with themselves, knowing that the people fully understand what is going on?

Probably because over 90 % of the mainstream media is owned by only 6 corporations, and the narrative presented serves the maximum profit gain of the multinational companies that own it.

The battle ground and defamation process against the President was easily channeled through the mainstream press. Alas, it did not end so well. The Russian Collusion never turned out to be anything but mainstream heresay. In retrospect, the Megyn Kelly interviews with president Putin in 2017 therefore becomes extra amusing.