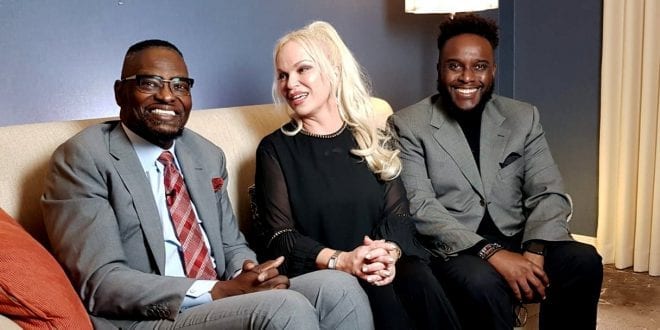 Race in America: Bishop Harry Jackson on the need to heal the divide

At The Herland Report YouTube channel we regularly have the privilege of sit downs with leading intellectuals, bestselling authors and activists.

In a divisive time, the wisdom of the forefront spiritual leader, Bishop Harry Jackson, in the Herland Report exclusive interview below, gives Christian perspectives to the current hatred and ethnic conflict, writes historian of comparative religions, Hanne Nabintu Herland in her regular column at World Net Daily, the largest Conservative news network in America.

Bishop Harry Jackson is one of the chief conveners of The Reconciled Church: Healing the Racial Divide Movement – an effort to heal the racial division first in the church and then the nation.

Jackson has been featured in the leading media outlets and is a frequent guest at the Donald Trump White House. He is senior pastor at Hope Christian Church in Maryland, educated at Harvard Business School, the founder of the High Impact Leadership Coalition and a co-founder of The Reconciled Church initiative.

The bishop says in this exclusive interview: “America has always had racism fueled by fear and pride beneath the surface. There was a time when a man with my skin color looking at a beautiful white woman would only have to raise my voice and say ‘you’re cute,’ and I would be tortured and lynched on the spot. That is the America that existed in the ’30s, ’40s and the ’50s.”

The bishop says: “My sense of fighting for justice in this generation was born out of my very first years of life. My father was on his way home from a voter registration event, and he was stopped by a state trooper in the state of Florida, not far from Florida University.”

“The state trooper made him kneel and took out his weapon and put it right next to his ear and pulled the trigger, temporarily deafening my dad. Then he said, using the ‘N-word’: ‘If you do anything like that again, next time I’ll kill you!’ By the time he came home, he decided that he was going to leave the South as soon as he graduated. So, there was this sense that there was a deep injustice in the country.”

“I will never forget me being 12 years old sitting down with my dad in the kitchen of our home in Avondale, Cincinnati. He began to tell me that he felt that racism was an emotional and mental disease, and he said some of the people who helped him most in his life had been white, and some who had done the most reprehensible to our family had been black.”

“He said that I shouldn’t judge people by their skin color. This was before Dr. King’s statements became so famous.”

Bishop Jackson points out: “I believe that my biblical way put me in the conservative side of the camp, politically, back in the early 2000s. On the other hand, we do find that black conservatives and white conservatives have two different worldviews, meaning that they look through different lenses at the world.”

“The Bible talk about righteousness and justice, and blacks often look through the justice lens because we have been discriminated against in America.”

“Then, very often, white evangelicals often look through the righteousness lens. But, the Bible doesn’t teach righteousness and justice separately, they are to be intertwined, together and one unit.”

Asked about the current divisiveness in America, he replies: “Even Jesus prophesied about this. He said that ethnic groups were going to rise up in a carnal and perhaps even demonic inspired sense of superiority. Jesus said in the last days that nations would revolt against nations; and the underlying Greek word for this is ethnos.”

“I would report to you that the division that you are seeing now has been here in America for 400 years. I see the traces of tribalism as a valid explanatory model to understand the United States. I prefer to say it like this, rather than to use the word ‘racism.’

?The Bible teaches us that we are one race. But, tribalism in Africa, for example, means that people who look alike, at least to me, still kill each other. Here, I would say tribalism and generational poverty/class is a high driver that trump the impact of race in the United States.”

“In other words, if I am raising a family that in four generations has not been able to get out of the ghetto or have any higher education, the chances of poverty are significantly higher, no matter what kind of atonement would be given.”

“Imagine the America that has endured generational poverty, lack of education and exposure, you then have a massive class distinction. You’re locked into a world with less opportunity and then on top of it all, you’re black. That describes part of the problem.”

About Christianity, the honorable bishop says to The Herland Report: “I believe that by standing with God and obeying the rules of God, if you will, creating an atmosphere of justice for the less fortunate and those who can’t cry out for themselves, God is glorified.”

“I believe we are in a time in which God himself is exposing America and saying this is where we really are. I want to say that racism is not only a white man’s problem. We have black racists who are talking about taking up arms.”

“The great apostle John says that ‘we know that we’ve passed from death unto life because we love the brethren.’ In John’s days, that meant people of Middle Eastern descent, Roman descent, African descent. So, if you do not have love for the brethren and cultivate that love for the people that don’t look like you, we have a counterfeit Christianity.”

Previous FOX Tucker Carlson now announce what we wrote two months ago: George Floyd was not killed by police, but by overdose of Fentanyl Opioid
Next George Floyd Killed Himself by drug overdose, read Medical Examiner’s report: Police officer Chauvin did not kill him