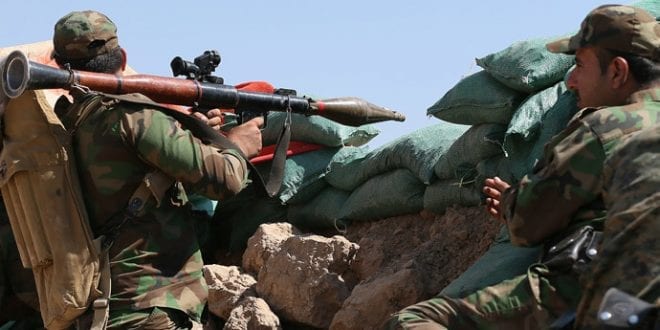 Syria: When will Kurds realize the US only serves US interests?

Herland Report: Why do the Kurds keep hoping again and again that the US will provide and secure the implementation of Kurdistan as a nation state?

When are they going to realize that the US serves US interests, not the Kurds? After all, the US has abandoned them several times before. Now the US is apparently leaving Syria, again. This time it seems final.

The Herland Report has repeatedly asked this question, seeing how SDF replaced ISIS guarding Syrian oil fields.  One may seriously question how strategically smart it has been for the Kurds to ally with the US, gaining enemies from every angle in their own region.

The major entry of the Kurds onto the stage of the Syrian war came in the 2015 aftermath of ISIS’ failure to perform showdown in Damascus.

That was when the US suddenly decided to support the Kurds’ fight for a nation state.

A short history: We all remember the horror photos of ISIS in 2014, well coordinated shows in  the Western media. We also remember the Judicial Watch leaked DIA report that stated who is allied with who in the Middle East. And that Saudi and Qatar funded ISIS, and that Hillary Clinton knew this all along.

Then came the fall of ISIS Raqqa and North-Eastern Syria – and the Kurds took over the highly desired oil rich Eastern Syria previously so master mindedly conquered by ISIS. In essence, the US/Saudi alliance retained control over the area. (Photo: SDF, Syria. AFP)

The Kurds have served US interests, but alas, now seem to come the end of the Kurdish dream. The Kurds seem to gladly make enemies of not some, but all the peoples around them. The list is long: Iraq, Syria, Turkey, Iran etc.

And to our surprise, the tone was already changing in Western media by the beginning of 2019. Previously, we were told by the Western Press that Assad was a pure devil, now to cite Yugo Kovach in The Guardian, the Kurds would have been better off supporting Assad in the first place:

Assad’s secular regime did not pose a threat to the West. Yet from the start of Syria’s troubles we diplomatically sided with the insurgents.

We trained “moderates” and supplied them with “non-lethal” equipment. When it became obvious that Saudi Arabia, Qatar and Turkey were aiding Islamic State, we turned a blind eye.

Then there was Washington’s creation of the Kurdish-led Syrian Democratic Forces. It was in a sense too successful, occupying much of north-east Syria.

No thought was given to reconciling Kurdish rule over extensive Arab-populated areas. And Washington must have known that Turkey would never tolerate a bordering Kurdish state.

Syria’s Kurds would have been better off aligning themselves with Assad.

The US has its own problems at home. Certainly, some steadily produce obstacles to President Trump, which he seems to overcome, one by one.

Now, Syria at the right timing – after the Western blunders of supporting Idlib, false flag chemical attacks and the failures of the Saudi supported Jihadists to create the wished for “caliphate” in Damascus. And Saudi now weakened for a number of reasons.

“U.S. President Donald Trump’s unexpected decision to pull U.S. troops from Syria (and Afghanistan) back in January was already then music to Turkish ears. Turkish President Recep Tayyip Erdoğan called it “the clearest and most encouraging statement” from Washington.

The way Trump made that decision has also given new ammunition to Turkey’s pro-Erdoğan media to portray the decision as “Erdoğan’s victory.” As the pullout halted throughout 2019, Erdogan now finally seems to get his war.

SFD is complaining that Turkey will hinder their fight against ISIS. And who is ISIS exactly nowadays? Haven’t they all soon returned home?

Nowhere in the West has there been hardly even one court case indictment against an ISIS fighter upon his return to the country of his citizenship, whether it is the UK, US or any other Western country?

Although thousands of ISIS fighters have “returned home”, again, that is to the UK, Norway, Sweden, France etc. none of them are indicted.

Senator Lindsey Graham, – predictably enough – the old friend of both John McCain and the Al Qaida leaders in Libya who came to power after the NATO invasion of Libya in 2011, complained last time president Trump said to pull out, stating: “What Turkey is going to do is unleash holy hell on the Kurds. In the eyes of Turkey, they’re more of a threat than ISIS (IS). So this decision is a disaster.”

Trump’s decision to remove the US contribution to the insurgents in Syria opens up a whole new scenario that leaves the field to the local players.

Which again, is one of president Trump’s goals: That the US should spend its money in the US and rebuild its own country.