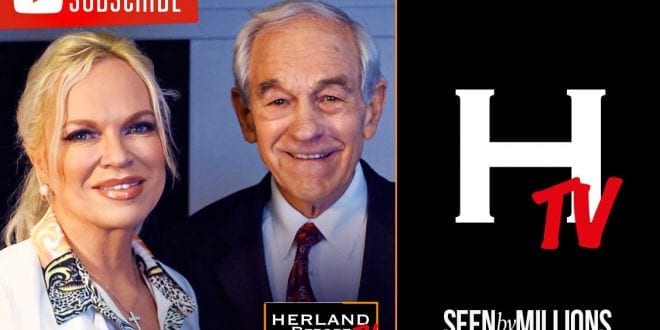 Herland Report: Watch an exclusive short for The Herland Report TV (HTV)from an interview with Dr. Ron Paul: “Our system is failing, but I think it’s good that bad ideas are failing. I want the fiat currency to fail, I want people to have honest money, I want liberty to prevail,” says Dr. Ron Paul, former US presidential candidate, US Congressman, Libertarian, author and founder of The Liberty Report.

He is also president of The Ron Paul Institute and speaks to The Herland Report in several exclusive interviews. This is an exclusive short.

In this teaser to the upcoming programs on Herland Report with Dr. Paul, he states that:

“The people that are on the defensive now are the people who believe in this superpower state, even the neo-cons are on the defensive because everything they do fails. Just look at the Middle East! We help our enemies as much as we are supposed to help our allies! When you think about how Iran has come out of this. Our system is failing.”

The Herland Report, Scandinavia has millions of readers and our TV channel features leading intellectuals, activists, authors and others on foreign policy, Western cultural decay, religion and the need for international justice and respect for national sovereignty.

Previous Licensed Pfizer Jab Comirnaty not available: No Liability for current Emergency Use Products
Next Communism in America: Is it Terrorism to disagree with the Government?