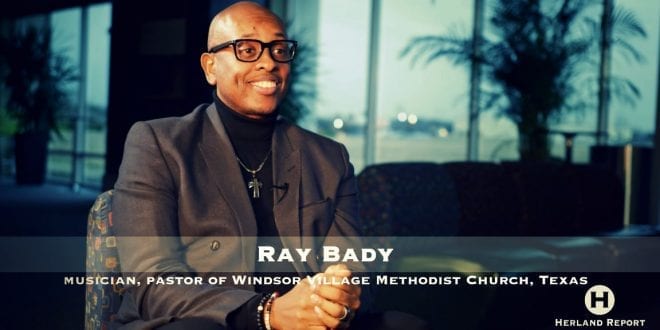 Famous musician Ray Bady: Music is a universal force that brings us together

The Herland Report TV (HTV) was lucky enough to speak to famous musician and inspirational speaker, Ray Bady in Texas, who reaches the young minds of America. We wanted to hear his personal story on how it was to grow up in Chicago. As a good friend to many of the well-known musicians world wide, he has a strong, personal story to tell on how to succeed in life.

“Music is a universal force, everybody understands music. It has the ability to do something that no other language can. It has brought African Americans together with Caucasians, made people who never would have sat down with each other, sit down,” says Ray Bady to The Herland Report.

He is a famous musician who worked with the leading Chicago music producers before becoming an inspirational speaker, passionately addressing the young generation, reaching the minds of modern America.

“We grew up in Chicago and saw a lot of negativity. I saw poverty, us killing each other, I saw that it was because of a lack of love. A lack of support. They knew how to scrap and survive and did the best they could. I saw music as a resource that I could use to get myself out of the community that I was born and raised in.”

ALSO READ: Everybody is looking for love and acceptance, let’s use Social Media to make the world a better place, Ray Bady, Herland Report.

Ray Bady tells his story in the Herland Report Show: “I have been around gospel music all my life – country, jazz and so many different genres. Whether its through hip-hop, traditional, urban, contemporary, gospel music has a way of hitting and touching the heart like no other music. The way, for example, the artist Lecrae has now taken it and utilized his gifts and talents and attached his gifts and talents along with the message of music has been incredible.”

“So many of the artist you see, being it Lecrae, Marvin Sapp, R Kelly, these guys were in the inner cities of their communities but they saw music as a way out, to escape. In their music, they speak about where they came from, how the struggle was real, what they saw and what they see. Their music has now taken them to a level of greatness, but they never forget about where we have come from and how hard it was.”

“Through the church, so many artist like me, Marvin Sapp, Kanye West, got a chance, we were all born and raised in the church. It was something about the music that was behind the gospel that pushed us forward and wanted us to go further in our careers.”

“Being around Chicago, you were also inspired to do great. We didn’t have community activities that supported our gifts and our arts. So, the church was the house, the grounds that we went on to actually develop these gifts and talents.” The Herland Report is founded and hosted by Hanne Nabintu Herland, a historian of comparative religions, bestselling author, commentator and TV producer, known from the media for sharp analysis and fearless speech.

SUBSCRIBE TO THE HERLAND REPORT YOUTUBE CHANNEL and be the first to watch the shows with leading intellectuals, bestselling authors and activists
Previous One way tolerance: Plurality is enemy in Progressive West – WND
Next Christians are under Persecution siege across the world