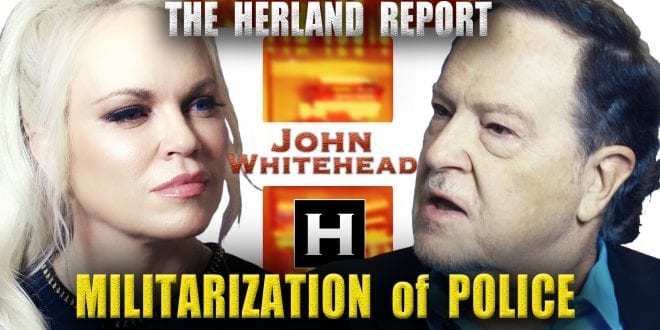 Whitehead also adresses the deliberate dumbing down of the American people, rampant culture of fear, the sovietization of American society and lack of respect for the first amendment in the Constitution. Watch it here.

John Whitehead is the president of The Rutherford Institute, a constitutional attorney who has defended so many against police brutality, one of the US’ leading voices for the American Constitution and the Bill of Rights.

He is also an acclaimed author with titles such as The Battlefield America. The war on the American people. Also watch The Herland Report interview with a Black Lives Matter leader, Keedran Franklin here.

Whitehead says: “America may be asked where she is. If I go back 30 years it was a totally different country, and much of it has come with the militarization of the local police in this country.”

“Local police today beat through a federal program called the 1033 program, which Donald Trump has said he will enhance as well, yet more military gear to policemen. So, large corporations are making a lot of money off of the militarization of police forces.”

Whitehead’s concern for the persecuted and oppressed led him, in 1982, to establish The Rutherford Institute, a nonprofit civil liberties and human rights organization located in Charlottesville, Virginia. Deeply committed to protecting the constitutional freedoms of Americans and the integral human rights of all people, The Rutherford Institute has emerged as a prominent leader in the national dialogue on civil liberties and human rights and a formidable champion of the Constitution. Whitehead serves as the Institute’s president and spokesperson.

Constitutional attorney, John Whitehead: “The material the policemen have today are heavy. They are wearing helmets. They dress in black. They have all kinds of automatic weapons. They have sniper scopes. They have stingray devices.”

“If a police car pulls up in front of your home, they can download everything from your phone, your cell phone, and your laptop, and know everything you are doing.”

“They have vans which can actually scan your home to see who is moving around in your home, and they do this on a regular basis. This is America today with the rampant militarization of police forces.”

“Combine that with the SWAT teams, which are 80 000 occurring annually in America. It used to be about three in the 1980s. They are crashing through people’s doors in the middle of night. Kids have actually been killed.”

“There was the case of Ireland Jones in Detroit, where the police crashed through an apartment building, upper level, went through the windows and doors. There were after some fellow, supposedly a crook. One of the policemen actually said he tripped and his gun went off. Ayana Jones was 10 year old, she was an African-American girl laying on her couch. The bullet went through and killed her.” John Whitehead: “There was blood splatter all over the floor. Her father came out screaming, wondered what had happened, and fell down in her blood. What had happened was the police were in the wrong apartment. “

“The fellow they were looking for was several floors up, but she died. That was a SWAT team raid gone awry.”

“Then there was the case of Haussegger Garena, who was a former veteran of Iraq and Afghanistan, and the police were supposedly in an Arizona neighborhood. America, and the state of Arizona, they were doing a sweep of the neighborhood trying to find people using marijuana. They picked on Haussegger and they went into his home. This is a former veteran. He had one gun in his home, a shotgun. He thought burglars had entered the hall. He took his wife and daughter and put them in the closet behind him. So at the end of his hallway with his rifle, the police fired over 70 times, hitting him 50.”

“He collapses and bleeding to death. His wife comes out screaming for medics to help him. The police will not let the medics help him. He bleeds to death on the floor.”

“Turns out the police were in the wrong home. He had no marijuana. Another SWAT team raid gone awry.”

“That is the way the system works in America with the militarization of police forces. I talked to a former NSA agent who said that in that regard, America has become a copy of the old Soviet model, where if people disagree with the government, or they did a weird painting, or anti-government voter, they were put in mental hospitals.”

“The Princeton University, Northwestern University study would show we are a large oligarchy run by money elite. President Carter agreed with that. Money runs the show in America, not civil liberties. That is why I keep saying the key thing to freedom in America is the average citizen out there saying, hey, I am gonna actually stand with the Bill of Rights.” Previous The United States war on its own People
Next Colonization ended Slavery in Africa, it did not start it