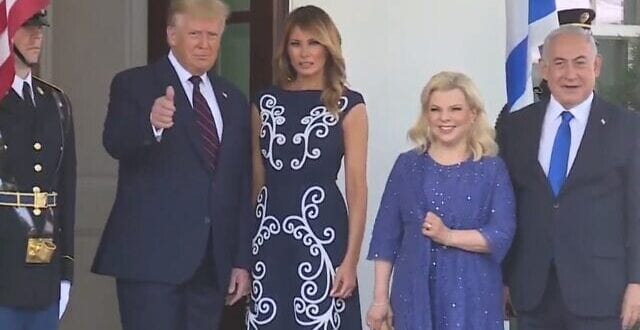 Herland Report: Arab nations peace treaty with Israel: As the UAE-Israel peace deal is being signed in the White House, the Bahrain peace agreement adds to the massive success for President Trump as a Middle East peace broker.

In the meeting with Israeli Prime Minister, Benjamin Netanyahu, President Trump stated the five or six other Arab nations are in the process of joining the peace treaties with Israel.

The historic moment marks the end of the decade long refusal to acknowledge the existence of the Jewish state of Israel and opens up for new and massive trade possibilities and cooperation between the nations in this region.

Trump gives Netanyahu a “special token of affection,” namely a key to the White House.

“You’ve been an amazing leader for a very long time,” says Trump.

Israel “is getting peace,” says the US president.

Trump says, “We have many nations ready to follow” and make peace with Israel.

He says there are “at least five or six countries coming along very quickly.”

“They’re warring countries but they’re tired of fighting,” he says.

“You’re going to see a lot of great activity. There’s going to be peace in the Middle East,” adds Trump.

But he declines to name the countries.

Trump says the differences with Israel over the F-35 sales to the UAE “is going to be very easy to work out.”

Netanyahu says Trump has “the hearts of the people of Israel.”

The president of the liberal, pro-Israel J Street Lobby lauds the peace agreements Israel will be signing later today with the UAE and Bahrain, but clarifies that they don’t “fundamentally address the Palestinian issue.”

The comments by Jeremy Ben Ami to The Times of Israel come after Trump administration senior adviser Jared Kushner said today’s White House ceremony “marks the beginning of the end of the Israel-Arab conflict.”

White House Special Envoy on Iran, Brian Hook said “historians will look back on these two peace agreements as the beginning of the end of the Israeli-Palestinian conflict.”

Previous The Magnitsky Act, Bill Browder, Andrei Nekrasov and the art of Deception
Next The Secret world of Gold and why Modern Monetary Theory is doomed to fail