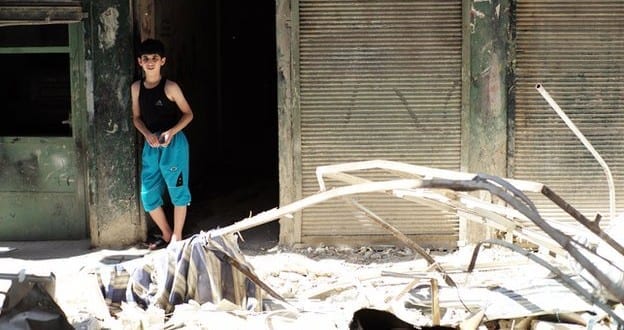 Samuel Huntington, the clash of civilizations and Libya

Following the 1993 publishing of the book “Clash of Civilizations?” by the political scientist Samuel Huntington, it has only become more evident how prescient his thesis was at this time when looking at the US’ foreign policy in the Middle East.

Huntington hypothesized that in the decades following the end of the Cold War; political conflicts would be rooted in cultural differences.

“Different civilizations have fundamentally different conceptions of reality. They do not understand each other’s cultures sufficiently. Hence, globalization will have unforeseen consequences and gradually develop into a cultural conflict on a world basis.” (Photo: BBC in Syria)

Two decades after Huntington’s predictions, it is more apparent than ever how important a culture’s religion, ethical principles and social structure are for the development of their society.

“The Clash of Civilizations?” was written long before the attacks on World Trade Center in 2001, before the invasion of Afghanistan (which is the longest enduring military conflict in the US’s history), long before Osama bin Laden became exalted as an Islamist icon in the cultural war on Western society.

“It was also long before the so-called Arab Spring, ironically with the military aid of a coalition of financially challenged, confused Western powers, that many Middle Eastern countries liberated themselves from Western supremacy with a strong desire to reconnect with their own cultural and religious identities. Paradoxically, Western political pressure for democratization of the aforementioned nations has given rise to strong Islamist states that undermine Western liberal ideals.

This has further led to a situation where the ethnic, religious and political conflicts in the Middle East have surfaced, resulting in violent conflicts. This also affects the ethnic minorities to a large extent. The geopolitical balance of power is slowly shifted eastward towards Iran, Turkey, and economically prosperous China and Russia.”

When Samuel Huntington published his thesis, he also presented possible solutions to the anticipated global conflicts. History is full of examples of constructive forces that after times of crisis returned to the values and principals that originally made their respective cultures successful. Respect is the key word — mutual respect for each culture’s sovereignty within its own territory. “One of Huntington’s main points is that in a world dominated by different ethnic and religious identities, it is imperative that Western culture recognize that it is only one of many civilizations. Its culture is special but not universal.”

It has sovereignty in the Western “cultural hemisphere” but not within other cultural spheres elsewhere in the world. After the fall of the Soviet Union, US-led Western society elevated itself to global political supremacy.

In the belief that the “battle of history” is over and the development has stalled, the materialistic liberal Western culture has been proclaimed to be the winner.

The thought that Western values are universal is tightly connected with the Western conception that it is the world’s preeminent culture.

In the spirit of cultural narcissism, Western society has made the assumption that all people of all cultures desire to become Western, and, if given the opportunity, will get rid of their non-democratic leaders, and distance themselves from the traditional cultures that they have developed over thousands of years to be a source of pride and cultural heritage.

Western universalists and neo-imperialists state in the spirit of Social Darwinism that it is their responsibility to see that the world implements its own cultural ideals, the sum of the most enlightened, most modern ways of thinking in the history of mankind.

In a globalized world with increasing conflict along cultural borders, Huntington states, the thought of Western values as universal is potentially very dangerous. It gives the Western powers artificial legitimacy to intervene in other countries’ domestic affairs, destabilize nations, and contribute to war and domestic unrest.

After the end of the cold war there has not been an equal military power to challenge the Western hegemony. Global political questions are quickly resolved in the UN Security Council by the US, UK and France. Economic issues are handled equally quickly by the US, Germany and Japan. These countries have close political bonds that ensure to exclude smaller nations and Non-Western nations.

Huntington claims that the Western domination in the UN Security Council plays a significant role in that the UN long has served the interests of Western interests. Thus the nations belonging to the Western Civilization use international institutions, military power, and economic resources to dominate the international scene.

Decisions made in the UN Security Council or the international monetary fund IMF are made by the same nations, while it is presented for the rest of the world as if it is for the common interest of the world society or world peace. This is cunning political rhetoric.

Libyan leader, Muammar Gaddafi was killed in October, 2011 in the aftermath of the NATO and allies’ assault on Libya.

Also Norwegian foreign policy has for the past decade been strongly influenced by a Eurocentric mindset. The so-called the engagement politic is based on an arrogant assumption that all nations should be more like Norway.

The dream that every nation should be striving to be more like Norway is a narcissistic idea that amplifies the Norwegian people’s unrealistic conception of little Norway as the world’s best country. The thought seems to imply that the Norwegian way of arranging society will automatically work as well in any arbitrary culture.

The political scientist Robert Kagan is among those who have pointed out that the West has in the past decade run an aggressive self-exalting military politic with the goal of forming the world after their own ideals, and in the process forced others to bow down to their will, in ways that is doomed to inspire retribution.

“The arrogant attitude has a sting of irrationality, because it does not take into account the strong indications of the downfall of Western Society.” That Western Nations engage in wars that are not defensive along their own borders or concern local political conflicts may very well lead to the fall of the West.

Those who experience the Western brutal abusive nature, logically nurture a strong resentment towards this. The characteristic of a regressing civilization is hubris in a time where the culture is in reality weakened. The lack of cultural musicality creates a climate influenced by lack of humility and respect for others.

The danger of chaos and anarchy connected with democratization is morbidly underestimated. Many live, all consumed in their own cultural sphere and their contemporary ideological and political narratives, captured by different academic environments’ paradigms and group pressure, incapable of understanding other cultures realities.

One of the most recent examples of Western violations is the Libya War in 2011. This is also one of the most obvious examples of Huntington’s points. Libya’s recently deceased president; the socialist Moammar al-Gaddafi, has not, similarly to several Western leaders, no spotless record.

In the 1970’s the displayed an aggressive Anti-Western attitude that together with his personal friend Yassir Arafat. Gaddafi ran a nation where citizens had little personal security, nor were there any central organization.

Nonetheless he managed to establish a strong welfare society in the tribal oriented population. The oil revenue was passed down to the populous in a way that was unique in an African perspective.

Already in the 1980’s, Libya figured as the wealthiest and most developed nation in Africa, with higher standard of living than that of Italy, Australia and New Zealand. Welfare was relatively equally dispersed among the population, who also had a public school system and organized funding for higher education for both men and women, and extensive rights for the southern black minority of Libya, which earlier suffered under serious oppression.

Libya before its destruction in 2011 and aftermath. Photo: TIme Travel.

Roughly outlined, this was Libya before NATO, under the pretext of protecting civilians, bombed infrastructure, cities, waterlines and airports for several months, all the wealth that Libya had assembled outside the Western cultural sphere.

NATO has gone from being a transatlantic defense alliance to a political assault alliance against weak states where Western interests are being threatened. However it is easy to forget that World War 2 was a defensive military reaction from the allied perspective. Arranged assaults on dubious foundations, and topple regimes, like Hitler also did, comes with a whole lot more responsibility.

It is now attempted to bomb human rights, freedom of speech and democracy in place with military means in several countries across the globe. The Norwegian government is frighteningly active on this arena.

Norway was responsible to drop 588 bombs from our warplanes over Libya. Thousands of civilians were killed according to international media.

The political disclaimer after the ethnical cleansing and genocides in Sirte and the desecration and lawless killing of Gaddafi and his son Muttasim, is outrageous.

When did the international law approve the killing of the families of heads of states? In a just world those with the political responsibilities for this would be trialed in Haag for crimes against humanity.

At the same time that Libya is on the brink of civil war following the intervention of NATO, measured foreign ministers like millionaire heir Jonas Gahr Støre:

“It is now up to the citizens of Libya, not to replace a dictatorship with another. It is the Libyans themselves that have fought the battle of Libya.” This is expressed knowing that ground forces from several NATO-nations were sent to Libya to train, consult and lead the rebel army, violating the UN mandate. To cite George Orwell: “When the white man becomes a tyrant, it is his own freedom he is destroying.”

With the contemporary Western double standards, lack of respect for international law and other nation’s sovereignty, it contributes to the opposite of world peace. Huntington’s hypothesis sadly seems to confirm itself.