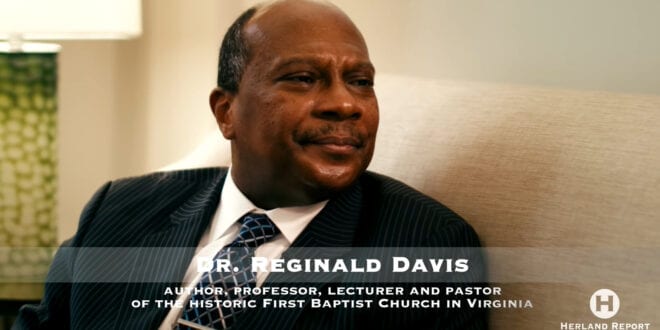 The Herland Report TV (HTV): Host Hanne Nabintu Herland speaks to Dr. Reginald Davis in this new interview about a system of oppression and the oppressed, racism in America, evils in society and the abuse of the lower classes.

“America has been a very racist country. Yet, race is just the tool that the oppressor used to keep us divided,” says Dr. Reginald Davis.

He is a well known professor, author, frequent radio guest and lecturer all over America, pastor of the historic First Baptist Church in Virginia.

Dr. Davis elaborates: “We have made progress over the years, but it just seemed like that we were reverting back to that overt racism which we felt we had conquered. The very social and political structures in America that was based upon racism, have not been corrected. A few changes have been made, but the system not corrected. So, we are right back to where we were before.”

“When we look at racism in institutions, prejudice plus power equals racism. That continues to go on. If groups are not empowered and if they do not have the power, then those who are in power are beginning to define reality for those people. Once you steal the control of the institutions, you are deciding to steal the destiny of other people. That has not changed in America.”

Interview Reginald Davis: How a system of Oppression subdues the Oppressed: In a series of Herland Report TV interviews, we are speaking to some of the leading voices in the US about what went wrong with American culture.

The superpower used to be known for being a multiracial society where people were unified by American national identity, today society is disintegrating and fractured into sub-groups based on race, religion, gender and class. What changed America?

Dr. Reginald David explains: “It does not matter what the color of the skin is. Sometimes we still use the color, but Martin Luther King Jr. tried to tell the poor whites in the South during the time of the civil rights movement, – Listen, you should be marching with us because if your stomach is empty and your pocket is empty and other oppressed people’s pockets emptied, and they are not getting the justice that they deserve, you are taking satisfaction in your skin color.”

“In other words, you still feel like you are better than me, even though we suffer from the same social economics in America.”

Dr. Davis: “The problem is, of course, that the power structure itself cannot afford different groups to get together. They cannot afford blacks, whites, red, or even yellow people coming together because they do not want to change those structures of oppression. You have got to understand, the oppressor is a cunning group of people.”

“Racism is still operating as it always have operated, and want to maintain the structures of power that the powerful, rich white at the top and everybody else at the bottom.”

“Now, in the process of that structure, they do not mind making some superficial changes. I can put up a black face in a White House, but they are still not going to dramatically change the structure.”

“Race is just the tool that the oppressor used to keep us divided. If I can use the tool of skin color to make people that do not look like me feel that they are superior to me just based upon that color, I can keep them divided.”

“It is a cliche to say, “divide and conquer”, but if you can divide the groups at the bottom, then it means that the people at the top can maintain those structures, and that is what we mean about institutional racism. It is still very much alive and well today in America.”

Interview Reginald Davis: How a system of Oppression subdues the Oppressed: Herland Report ” I was born here and I love my country, but I am disappointed in my country. I love America and I want America to live up to her creed.”

“Right now, we have got to practice this love. We need to unite and to come together, and that is a long way off. There is a disintegration of America because justice is not linking up.”

This is a great place to watch interviews with leading intellectuals from across the political spectrum.

Her latest book, Trump. The Battle for America is available in the USA and world-wide. and Also read “New Left Tyranny. The authoritarian destruction of our way of life”  and “The Culture War: How the West Lost its Greatness.” To learn more about her, visit www.theherlandreport.com and follow her on social media: YouTube, Facebook and Twitter.