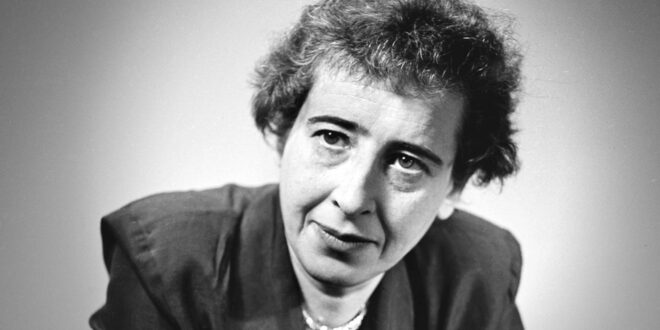 Hannah Arendt: Totalitarianism is product of the disintegration of the nation-state

Herland Report: In the famous German philosopher, Hannah Arendt ground-breaking book, The Origins of Totalitarianism, she analyzed the 20th century growth of atheist totalitarianism that led to Holocaust and the concentration camps of the Gulag in Russia.

In the attempt to understand how the rise of totalitarianism was possible in Germany and Russia, she seeks to understand the power structures that led to the silencing of an entire population out of fear for its own ruling elites.

Not unlike the fear of authorities and silencing of critical thinking that what we are experiencing today in the West.

It is particularly interesting that Arendt views the growth of totalitarianism as the product of the disintegration of the traditional nation-state, writes historian and author, Hanne Nabintu Herland in this article.

The pursuit of total political power at the expense of solving the practical problems of society, creates a society in which neglect of the needs of ordinary people dominates and the ruling elite.

In such a system, it becomes socially acceptable for politicians not to care about the population, as their main duty is to carry out the will of the powerful economic and ideological elites.

Hannah Arendt: The revolution of social structures was necessary in order to change the Western system from its traditional form in order to pursue the raw, political power overriding the interests of the people.

Arendt points out that totalitarian ideologies seem to have an appeal due to its promise of protection against insecurity. Precisely the socialist element, nurtures the establishment of ‘state benefits for everyone’, in such a manner that personal responsibility is evaded and the state becomes responsible for the welfare of its citizens.

After World War I and its unimaginable sufferings for millions of people, Arendt argues that precisely this opened the population for the promises of strong elites to solve the problems and provide security.

Hannah Arendt: Both Hitler and Stalin actively used media propaganda in the pursuit of acquiring power over the population and installing the idea of total security once personal freedoms and the right to critical thinking was given up.

She argues that totalitarianism is more than a single-party authoritarian government. It is fundamentally characterized by its replacement of all former values, traditions and institutions in order to establish political and social changes that silences any opposition and intellectual dissent in order to create a complacent and fearful population, that does not dare go against the will of the ruling elite.

The desire for global power characterizes totalitarian elites coupled with the very successful recipe of using terror to control the masses and turning a the population into obedient slaves of the system.

In the latter, rulers openly broadcast that those who question the ruler or his political choices face being killed, while in totalitarian regimes control over every aspect of a person’s life is key.

This means his views on the family, gender, church, religion – every aspect of his life is to be controlled. This happens under the steady media propaganda which asserts each citizen that he lives in “a free world and has all the rights to personal freedoms.”

Precisely the double standards of the collective propaganda defining the totalitarian state as a ‘’utopian universe of freedom and happiness’’ while the reality of strict repression is what the population experiences, this creates the regime of horror in which people keep quiet about their grievances. And suffer in silence.

Stories of life within the Soviet Union – the Communist Russian Nobel laureate and famous philosopher, Alexander Solzhenitsyn. He was exiled in 1975 for speaking about matters that the Soviet leaders disliked, and ended up in the United States.

Arrested in 1945 for writing critical comments about Stalin in private letters, he spent eight years in a concentration camp. From there, he was exiled to a Kazakhstan city for years. After Stalin died, he was allowed to print a book, yet, exiled again after it was published as the authorities found it to be too critical of the Soviet regime.

In his remarkable book, The Gulag Archipelago he seeks to comprehend the atheist, Soviet experiment and what it did to the humans that experienced it.

In a society where there is no more traditional morality, no God above us that awaits us on Judgement Day, no respect for the dignity of human kind as created and sustained by God, no personal requirement to behave in accordance with morality and Christian ethics, in such a society everything becomes permissible.

Hannah Arendt:  Any new thought, any inspiration from whichever source, any new way of looking at things or new kind of society without ethical borders becomes the ideal, as Brother Seraphim Rose explains it in God’s Revelation to the Human Heart. In such a society, once atheism becomes the dominant philosophy, all other religions must be exterminated – and the people who follow it.

This was the essence of the Communist ideology: Its hatred towards everything traditional, its despise towards the church and religion as a whole. Precisely the totalitarian element of denying humans the right to differ in opinion and retain the natural plurality so characteristic of being a human, makes the Gulag prison systems the natural expression of the atheist experiment in Russia.

To him, through his personal experience, atheism is based on the evil in man’s nature, as explained by Seraphim Rose. It does not teach man how to choose that which is good and how to separate good from evil in one’s own heart.

Previous Hannah Arendt: Understanding Totalitarianism and the reign of Terror
Next The American De-Industrialization and Poverty