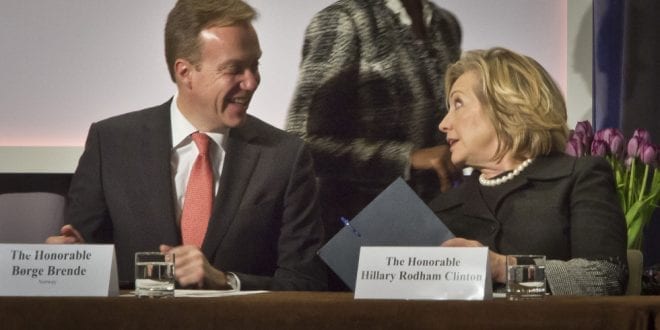 Herland Report: Norway was recently the focal point of a generous Hillary Clinton visit with the Norwegian Labour Party, March 8, 2019. We assume Clinton is looking for another payment from the Norwegian State to the Clinton Foundation, hoping Labour Party leader, Jonas Gahr Store can help.

Leading figures within the Labour Party seemed to pledge allegiance to Hillary Clinton, stating “sisterhood” with the notorious American war hawk, notorious for lying to Congress and selling US uranium to Russia, while the Russians paid lavish sums into the Clinton Foundation.

And Norway might be a good place to start for Clinton, as the country was among the top three foreign states (with Saudi Arabia and Qatar) who paid hundreds of millions into the Foundation while Clinton was Secretary of State.

This was revealed by Judicial Watch, the public watch dog in Washington, investigating government corruption and the misuse of power. Watch the Judicial Watch panel discuss this here.

It also addresses the allegation that the Obama administration quashed a DEA investigation into Hezbollah narco-terror activities in order to smooth the way for the Iran nuclear deal.

“There may have been acts that occurred at the State Department as a consequence of bribes paid to the Clinton Foundation, which are creating an ongoing security concern for the United States of America,” Gaetz said.

“Take, for example, the Hezbollah story you just mentioned. It’s not just the cocaine that’s being trafficked — you’ve got Hezbollah acting in common cause with narco-traffickers in South America to move opium, to move heroin, to move people into the United States.”

Gaetz said the accusation against the Clinton Foundation is that it “was just a money laundering operation where people paid in order to have access to the State Department.”

He added that there “were notations on particular documents and bids where people would write F.O.B. (friend of Bill) which means those were donors to the Clinton Foundation and as a consequence they were given special treatment.”