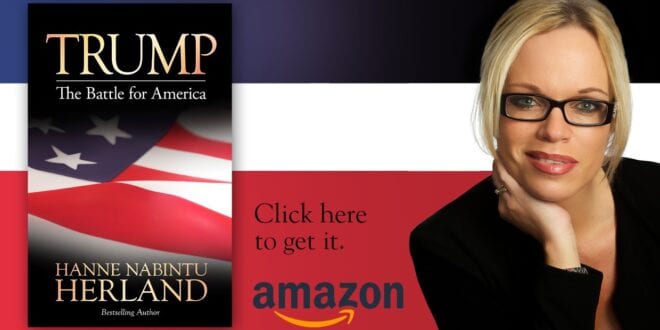 NEW BOOK “Trump. The Battle for America”: Totalitarianism Returns to the West

Herland Report: Propaganda at a level we have not seen before? If you speak to young people today and say that the British empire positively formed the world, bringing solid institutions and organization to India, Africa, and the colonies, they will probably look at you in disbelief.

Most of them know nothing about this period, about the rise of India and Africa under British and local collaboration.

All they know, is what the neo-Marxist professors at our universities have lectured, focusing on Identity Politics and its contempt for the traditional European values.

All these students probably have heard is that the British were horrible savages in history, looting and enslaving others, causing nations to cry out in despair, writes historian of comparative religions and bestselling author, Hanne Nabintu Herland in her new book Trump. The Battle for America.

None of them have read Niall Ferguson’s Empire: How Britain Made the Modern World or vast volumes of history.

School books simply do not address what was great about British culture, the students left in oblivion not only of the positive elements in European culture but its great achievements across the world.

This was the aim of the New Left strategy to deprive Europe of the knowledge of its historical greatness.

NEW BOOK “Trump. The Battle for America”: Totalitarianism Returns to the West: In times of massive political upheaval such as what we now are witnessing, the German philosopher Hannah Arendt might be worth revisiting.

She lived to see World War II and the totalitarian socialist Nazi regime up close. Arendt wrote The Origins of Totalitarianism to warn the world of the terrible fate of those who embrace authoritarianism.

She states that a totalitarian government becomes even worse than a dictatorship because, in a dictatorship, the elites openly kill those they do not like.

Individuals who show resilience and do not submit to the views of the state are ruthlessly bullied, defamed, lose their jobs, and ultimately get killed in order to silence opposition.

NEW BOOK “Trump. The Battle for America”: Totalitarianism Returns to the West: This creates a complex culture of fear; the smallest murmur of protest may have detrimental consequences. The population fears for their lives, knowing Gulag or death camps in Siberia awaits the bold.

Arendt makes a distinction: While a dictatorship openly kills dissidents, the elites in totalitarian regimes strive not only political power but also to dominate every aspect of human life ideologically. The aim is to control every thought process to the smallest detail – what people think about family, sex, relationships, religion, school, church, law, ethics and morals, and so on.

Arendt points out that this is a terrifying system, as even your personal opinions, intellectual beliefs, and what you do inside your own house now is to be controlled by the state.

This brings to memory the gruesome society described in English novelist, George Orwell’s 1984 as the hero in the story is gradually terrorized, desperately tortured, demeaned, and questioned to the point that he asserts that he will be killed.

The state wishes to kill your will, not your body, to create an obedient slave to Big Brother. The book ends as the hero is totally broken, crying for genuine happiness as he sees Big Brother on the screen.

He now truly believes in everything Big Brother tells him, be in two plus two is five or whatever argument he is told to agree with.

As over 90 % of the media in America was by 2012 owned by only 6 corporations, as we have seen. It has never been easier to push propaganda and manufacture consent.

Now the internet free speech arena seems to be shutting down too in a historic display of illiberal intolerance towards specific groups.

The allegation is that the anti-globalist, conservative, and religious groups are particularly targeted, those who voice the need to respect national sovereignty and international law.

The founder of The Liberty Report, Dr. Ron Paul, one of America’s most respected voices, recently gave an exclusive interview to The Herland Report where we spoke about the issues concerning the growing intolerance in the West.

Dr. Paul is world-famous for his critical views of the Federal Reserve, the military-industrial complex, NSA surveillance, and US participation in the wars abroad.

NEW BOOK “Trump. The Battle for America”: Totalitarianism Returns to the West: As censorship seems to be the new fashion in America, Dr. Paul surprisingly says that the trend will eventually die out in much the same manner as the Soviet Union.

The system will come to an end: “The collapse of the Soviet system happened because it was a failed system. I think we have a failed system now that’s affecting our culture. That is why you have the cultural Marxists in our universities preaching. They want to disrupt our culture so that they can mold it back together in a different type of centralized control. It is cultural more than economic Marxism. And certainly, the introduction to the neo-conservatives has been a big deal.”

In the interview, posted on YouTube, Dr. Paul adds: “The Soviet system didn’t develop anything, and the same is happening to us right now. The only thing that we export now are dollars. We get a good deal because we have managed, through our military and economic power, to maintain a dollar system. Therefore, we have a tremendous advantage, but it’s a system that is deteriorating, and it must be reversed.”

Hannah Arendt spent her entire life trying to understand how man’s cruelty could be systematized and institutionalized to such an extent during World War II.

They were obedient to “Big Brother.” They neglected to reflect on the morality of their own actions, feared repercussions from the authorities, and hid behind those bureaucrats who gave the orders.

When attending the Eichmann trial in Jerusalem, Arendt suggested that one of the effects of a strong state is the de-responsibilization of its citizens. She used Eichmann as an example, noting he steadily hid behind precisely this idea – that he followed orders and chose not to disobey them, considering the harsh times of war.

Of course, it was beyond evident that Eichmann was one of the chief architects of the Holocaust. His excuses, nonetheless, point to the grave dangers of lack of individual responsibility in institutionalized societies where citizens become desensitized regarding personal morality, as they hide behind “only following orders.”

Arendt concluded that in systems where the state demand for consensus thoroughly controls its people, fear of the authorities is greater than the individual sense of justice. Complacency, a passive attitude and lack of personal morals permeate those who should have stood up against injustice but did not.

People felt that “the system” was so authoritarian that there was no way a single person could make a difference. Welcome to Big Brother.

Hanne Nabintu Herland is a historian of comparative religions, bestselling author and commentator. She is the founder of The Herland Report news and opinion website which provides independent analysis from Western intellectuals, ground breaking YouTube interviews and Podcasts, cutting through the mainstream media rhetoric. This is a great place to watch interviews with leading intellectuals, thought leaders from across the political spectrum. Herland’s books include Respect, Det Nye Babylon, The Culture War. How the West lost its Greatness, and her latest, New Left Tyranny. The Authoritarian Destruction of Our Way of Life is available on Amazon, Barnes and Noble, across the USA and in 60 countries world-wide. New Left Tyranny shows how the neo-Marxist New Left turned their back on historical Western principles and became a destructive authoritarian force. www.theherlandreport.com

Previous The biggest political scandal in US History: The Plot against the President
Next Glenn Greenwald: American media in polarized culture war that destroys journalism