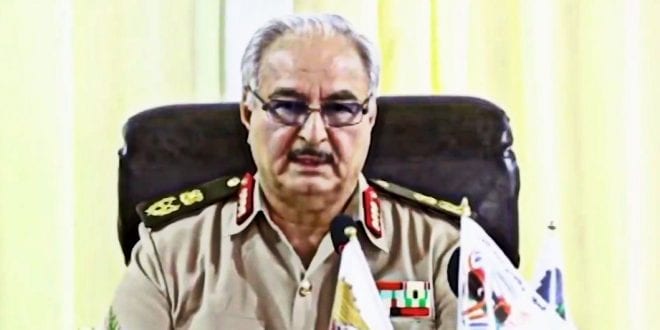 Herland Report: An arrest warrant has been issued by a Virginia court for US citizen and Russian ally, General Khalifa Haftar, leader of Libyan National Army (LNA) for multiple atrocities against Libyan civilians. He is an American citizen.

The Virginia court has issued the warrant on the basis that the general, who has the dual US and Libyan nationality, bears responsibility for the indiscriminate shelling of civilians in the Libyan capital Tripoli.

“The lawsuit against Haftar and his LNA forces, which invaded Tripoli in early April in an attempt to overthrow the internationally recognized Government of National Accord (GNA), was filed by four families related to those killed, estimated to be over 1 000 people, last July,” writes the African News Agency.

This follows the Libyan military prosecutor of the Defense Ministry ordering the arrest of four military leaderships from Khalifa Haftar’s forces, including Haftar himself in October, 2019, following the massacre in which the Russian Wagner group reportedly was involved, as Haftar’s ally.

The Libyan arrest warrant was after Haftar, the commander of judiciary and control authority of Haftar’s forces Oun Al-Furjani, Chief of Staff of Haftar’s forces appointed by Tobruk-based House of Representatives, Abdelrazik Al-Nathori, and Al-Sharif Al-Buzaidi.

“Ongoing investigations are following up on a lawsuit by Hussam Abuajila Anbais for the abduction and killing of Abuajila Anbais, Muhannad Anbais, Hamza Barbash, and the torture and kidnap of Hussam himself in Esbea district in southern Tripoli on September 24 by Russian armed group fighting for Haftar’s forces.” The arrest warrant says.

The military prosecutor ordered immediate apprehension of the four persons and sending them directly to his office, tasking security personnel of investigating the Russian armed group’s presence and whereabouts as well as other details to take the needed legal measures against them.

The only survivor of the Russian massacre of Wagner Group mercenaries in Esbea district, Hussam Anbais, filed a lawsuit against Haftar and accused him of bringing Russian mercenaries, kidnapping and killing his father, brother and brother-in-law.

The Virginia court said that if Haftar didn’t answer to his arrest warrant, he would be sentenced in absentia, the African News Agency reported.

US Congressmen have also called earlier for prosecuting Haftar for war crimes he committed in Libya since 2014, citing that he is a US citizen and should be tried in the US.

The ongoing fighting between LNA forces and GNA government troops has reached a stalemate with neither side gaining ground as civilians continue to pay the price and infrastructure is destroyed.

Various regional and international countries have also been involved in supporting different sides of the conflict with military, economic and other aid.

“Libya’s ongoing fighting is in danger of descending into a full-scale civil war that is threatening to spread into a regional conflict right on Europe’s doorstep.

However, what is fueling this conflict is outside intervention, as different countries with disparate interests take sides as the Libyan National Army (LNA), under renegade general Khalifa Haftar, continues its assault on the capital Tripoli in an attempt to overthrow the internationally-recognised Government of National Accord (GNA),” reports The African News Agency in yet another article on the matter.