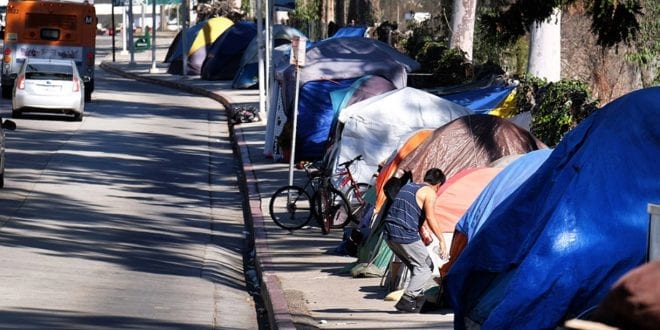 California wages war against its own middle-class, highest US poverty rate

Herland Report: How we are presented to news, used to determine how we viewed what happened in the world.

Not so much anymore, as the public rates the media extremely low, in the UK 24 % believe what they are told by newspapers and TV stations. People now understand that they are being misled by the media.

An example is the developments in California, a state now plagued by a rate of homelessness that may be unprecedented, hundreds sleeping in the streets, myriades of illegal aliens, its beaches – such as Venice Beach – filled with drug addicts and the homeless.

California boasts the country’s highest poverty rate. Its Liberal leadership hardly address any of these issues, neither the growing tax rates and gas price, as illegal immigrants flood its borders, destabilizing the social network already in place.

One wonders. Is the whole point to destabilize California, and hide the process from the public? Because the Democrats used to care about the worker, and now legal workers are discriminated as illegal aliens are accepted although they do not respect the law in the country.

Everyone knows that illegal aliens push the wage level down, creating a slave resembling state of hard working illegals without rights who will do almost anything to get by in the new country.

Still, the Democrats are all fine with that. So, who are they really working for?

The Speaker of the House of Representatives and Democrat, Nancy Pelosi of California, even pronounced Trump’s border wall “an immorality”, to which Democrats cheered and agreed.

Pelosi knows perfectly well that the flow of immigrants enter the US illegally and against US law, that their presence push the current wages-level down, that the legal immigrants voted for Trump to stop the illegal immigration.

Her analysis of Trump makes her utter the most bizarre statements, such as: “I think that the president’s relationship with thugs all over the world is appalling.”

Pelosi is worth several hundred million dollars. How does a public servant amass such wealth?

Why do leading American politicians fight for illegal activity, such as what is seen at the US southern border where the US drug industry has a yearly revenue of around 100 Billion USD. Not to mention human trafficking. These lawless activities remind us more about the Chicago Mob Rule in the 1930’s.