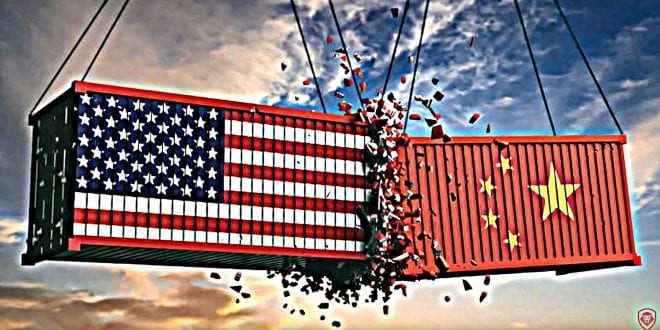 Can China Dethrone the US Dollar as Global Reserve?

Herland Report: On the US dollar as reserve currency, that is a tough thing to break especially for China since the yuan is not freely convertible. China has renminbi and yuan; one they peg to the dollar and the other is circulated in China.

Try converting USD to yuan in Paypal for example? The option is not there. Payments from the west to china sellers by Paypal (for example) are only in dollars.

It is a complex subject since China is the only foreign nation with a direct link into the US Treasury for purchase of US debt instruments, bypassing the Fed’s crooked relationship with its crooked primary dealers.

This is done to manage China’s global trade relationships via the value of its currency which is somewhat pegged to the dollar (even if China and Trump claim otherwise) thus evading Federal Reserve gamesmanship.

That’s why Trump messing with China is so dangerous, even if China has few options right now, writes Steve Brown for The Herland Report.

Brown is an antiwar activist, published scholar on the US monetary system and author of many books.

Excerpts: “So far China has been happy building ghost cities and high-quality infrastructure instead of blowing up their monetary reserves on the battlefield in useless wars as others do.”

“If China wanted to blow up their trillion in US dollar reserves on the battlefield that would be very serious for the west indeed and so far, the Chinese leadership — and for that matter China’s people — have expressed no interest in doing so.” As a result of this ‘trade war’ China has let the yuan slide versus the USD which is a warning to Trump, specifically Mnuchin, popularly known as one of the most slippery dealers (IndyMAC and One West) to ever walk the earth and China knows that.

China is hoping that a lower yuan will offset tariffs just as the US has ‘weaponized’ the dollar and has imposed sanctions and tariffs on China.

Because the sums are so vast with China holding so much US debt, and because China depends on exports to the west, China is somewhat boxed in.

So far China has been happy building ghost cities and high-quality infrastructure instead of blowing up their monetary reserves on the battlefield in useless wars as others do.

If China wanted to blow up their trillion in US dollar reserves on the battlefield that would be very serious for the west indeed and so far, the Chinese leadership — and for that matter China’s people — have expressed no interest in doing so.

China could reduce its ties to the US dollar (USD) by making the yuan freely convertible, noting the IMF’s inclusion of the yuan in the SDR as a first step.

Next, China could reduce its US foreign debt holdings but the question is where that money will go… where is a nation to park billions upon billions or even one+ trillion in surplus if not in the US dollar? That’s still the great quandary for China.

Besides the trade war, the US has engaged in Vicky Kagan-Nuland type jiggery-pokery in Hong Kong (perhaps inspired by John Bolton at the time?) attempting to pencilf China’s leadership in some very risky US gamesmanship along with Britain.

And Trump gives the impression he is willing to screw the pooch and throw everything away in the China trade confrontation to make a point about US hegemony.

The point being…. what option does China have in this war? China has another option — rather than sell Treasury’s or fold to US trade demands — China could reveal its physical gold reserves and partially back the yuan with gold.

NB: return to a full gold standard in the present world economy is not possible – we are only discussing a partial backing, which has been the prevalent standard, ie partial not full, throughout modern monetary history until the adoption of a full by-decree currency by the US on August 15, 1971.

In this scenario China could do the former Swiss thing and partially back the yuan with gold, just as the Swiss once partially backed the swiss franc with gold (40% reduced to 25% in 1997) until the Swiss franc threatened to become the world reserve currency usurping the USD by 1999.

What happened, the Swiss franc got so ‘strong’ against other currencies – and the USD – Swiss industries suffered.

Also, the prospect then that the Swiss franc (now called the CHF) would usurp the USD as global reserve currency was absolutely terrifying to Swiss bankers who evidently prefer to be financial parasites instead of monetary leaders. [1]

Deflationary pressures, domestic costs, and tariff problems became so bad by 1999, Switzerland held a public referendum and went off gold in 2000.

Then the bankers decided to sell almost two-thirds of their gold reserves — until the US financial collapse of 2008 — for reasons that are still unknown.

One suspicion is that the Swiss monetary pharaohs foresaw fiat by-decree currency as a permanent feature and future condition for the global monetary system, but there are many more potential reasons.

The Swiss move to sell off 60% of its gold reserves from 2000 – 2008 was particularly surprising in light of Switzerland’s support for the gold carry trade.

The old Swiss franc ended in 2000 and the current currency is the CHF.

Back to China’s potential to re-define the yuan with partial gold backing, should the yuan fall further against the dollar that would be the time to introduce such backing.[2]

China would have to reveal its true gold reserves and say, for example, back the yuan by 10% of its gold reserves.

But first, let’s posit that a full 1-to-1 ‘gold standard’ has never existed… not even in the United States, except for the period 1900-1913. Even then, National Bank Notes were not issued based on gold reserves although they purchased gold.

Historically the gold standard was implemented partially by cooperation of all the major monetary powers, where the chart here uses the example of partial gold backing in Britain showing 1830 to 1931 when Britain officially exited gold backing of its currency: Link: Historic Gold reserves to paper money ratio in Britain.

Note that a gold standard based on gold reserves only imposes monetary discipline on the monetary system, when not all governments intend fiat by-decree governmental and private debt issuance to be used for noble purposes, as Modern Money Theory hopes.

Along with universal convertibility of the yuan, a move to 10% gold reserve backing by China would be a magnet to all currency traders since China would commit to maintain the value of its currency, when the US dollar is in process of continued and accelerating decline and devaluation.

This is the bottom line that those who maintain the system wonder if you will ever know, that even partial gold backing of the yuan would dethrone the US dollar very quickly.

The problem being that partial backing of the yuan by gold would impact the global economy, and cause China’s money – no longer strictly a currency when partially backed by gold – to strengthen enormously in relation to the dollar, and perhaps even achieve a 3-to-1 ratio over time (just a guess) where the yuan is presently 7-to-1.

Such a move would dethrone the US dollar but would also hurt China and possibly even lead to social unrest there.

It would represent a fundamental change where China would have to become more like the US, relying on imports instead of exports; relying on ‘consumers’ to drive the economy, and war, just as the US has relied upon since November 22nd, 1963.[3]

So far, a partial gold backing of the yuan to challenge King Dollar is not in the mindset of China’s leaders despite the pointless trade provocations and arrogant prodding of the dragon and meddling in Hong Kong that the US is engaged in.

Thus the odds of a partial gold-backed yuan happening soon do not appear hopeful… and note that HSBC is itself a primary Fed dealer!

Which brings us to Fed dealers and the euro. As far as the euro challenging the USD? …that’s an easy one to address.

Some of Europe’s biggest banks are Primary Dealers of the Federal Reserve such as BNP Paribas, Barclays Capital, Credit Suisse AG, Deutsche Bank, and NatWest; they are actively engaged in maintaining the US dollar as global reserve currency.

Inducing the European banks to get their hands dirty with Federal Reserve dollars as primary dealers after 1971 was one key to establishing the USD as global reserve.

Ending that European support for the US dollar is an impossibility now, just witness Europe’s inability to work around US Treasury sanctions on Iran regarding Iran’s oil trade to Europe.

The big European banks will attempt to maintain parity with the US Dollar and cannot challenge it, since the USD is interwoven into their economies by their status as Federal Reserve primary dealers and their purchase of US securities and debt instruments.

Even the US financial collapse of 2008 saw foreign funds flee to the ‘safety’ of US Treasury debt instruments, when US debt instruments caused that collapse in the first place. The prospect for Europe of China to dethrone the USD as global reserve currency looks bleak for now.

Powell and other economists say the USD has at least fifty years remaining to reign supreme. However with the United States on the monetary path it has been on for fifty years now, the idea that the US can persist for another fifty years in its dominance of the global monetary system seems unlikely at best.

Perhaps of interest is the Federal Reserve’s extraordinary program to pump billions in US Federal Reserve digits into the banking system nightly, mostly to four primary dealers according to Wall Street on Parade.

The specific trade detail concerning these massive funding injections is largely unknown to the public… and there is no indication that the Fed will reveal the precise nature of this interbank lending issue any time soon.

The Fed calls this massive Bank of Big overnight funding operation a “technicality” — and, like the Fed itself, is evidently an opaque technicality with no end.

[1] In terms of narrow monetary outlook and the Swiss banker mentality, consider that the Swiss central bank — SNB — owns more shares of Facebook than any other, even more than Mark Zuckerberg. [2] China can devalue its currency by flooding foreign exchanges with yuan. If they take US dollars in a yuan flood, China can also drive the dollar higher on the exchanges which so far the US has not resisted. [3] The idea of US citizens being war consumers is of course justified by US history overall.

John
Steve Brown is the author of “Iraq: the Road to War” (Sourcewatch) editor of “Bush Administration War Crimes in Iraq” (Sourcewatch) “Trump’s Limited Hangout” and “Federal Reserve: Out-sourcing the Monetary System to the Money Trust Oligarchs Since 1913”; Steve is an antiwar activist, a published scholar on the US monetary system, and has appeared as guest contributor to The Duran, Fort Russ News, Strategika51, Herland Report, and the Ron Paul Institute.