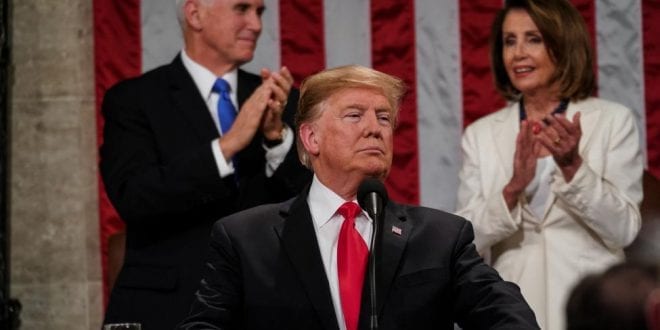 Herland Report: Readers are requesting my take on President Trump’s state of the union speech. Briefly, judging by the polls taken by his hostile critics—CNN and CBS—the speech was very successful with 76% of the public expressing approval.

And this despite several years of demonization of Trump by the presstitutes, Democratic Party, former intelligence and FBI officials, and a number of generals, writes Dr. Paul C. Roberts on The Herland Report.

The speech was successful, because Trump spoke common sense and appealed for unity. He emphasized restoring America’s greatness, a Reagan theme, and he made it clear that the Democrats’ policy of trying to discredit him and get him out of office was preventing the government from moving ahead with issues that need addressing. I believe everyone knows this, including the Democrats and the presstitutes.

When I say the speech was successful, I mean for Americans. Foreigners witnessing the chant—USA-USA-USA—saw the “exceptionalism” that has been Washington’s excuse for doing so much damage to others in the 21st century.

It is not clear what viewers made of the congresswomen in white with their hostile demeanor. Were the white clothes meant to signify their purity in contrast to Trump’s corruption or were the white suits a sign of disapproval like the white dress of the KKK meant disapproval of the black politicians put in power by Reconstruction? What did the Democratic Party gain by displaying female members of Congress as Trump foes?

Let’s move to more important questions about the speech.

A country without defended borders is not a country. If a country has no respect for its borders, why does the country need a military to repel invaders? Clearly, for the Democratic Party the United States is some kind of universalistic place where people from other lands come and go at will unimpeded.

Having borders is nationalism, and nationalism has been redefined from the patriotism it once was to fascism. For Democrats, as for Macron and Merkel, patriotism is the refusal to defend the country’s borders. In other words, the Democratic Party is now without any doubt the party of The Camp of the Saints.

I don’t think that the Democrats’ view of America is shared by the American people. Many commentators attribute the Democrats’ preference for massive non-white immigration to a belief that the immigrants will make the Democrats by far and away the dominant party and bring about an era of one party rule.

Possibly Democrats are this stupid, but the likely effect will be that the immigrants themselves will rule.

As for Trump himself, I think Trump was, and still is, sincere. Whereas the Democrats are now the party of victim groups, Trump focused on the plight of ordinary Americans and on normalizing US relations with Russia.

Ordinary Americans, not victim groups, are the backbone of the country. America cannot be great if ordinary people have dim prospects, and a government that is provoking conflict with powerful opponents that it itself has made into opponents has no time, energy, or resources to devote to improving the prospects of its population.

Nevertheless, sincere or not, Trump is misled on many issues. For example, China has not stolen US jobs. US jobs were exported to China by US global corporations in order to enrich themselves and their shareholders via lower labor costs. It was American firms that took the jobs to China.

Trump’s worst defeat, a defeat that could result in the destruction of the US and the world, is his defeat on the Russian front. Russiagate has achieved its purpose of forcing Trump off of his agenda of improving the US/Russian relationship.

The military/security complex, the Mueller “investigation,” the presstitutes, and the Democratic Party have successfully characterized all efforts to improve US/Russian relations as collusion with the enemy. Trump has been forced to impose more sanctions on Russia, to withdraw from the Iran nuclear agreement, to withdraw from the Intermediate Range Nuclear Treaty, and to declare his intent to scrap the last remaining arms control agreement in 2021.

These agreements to control nuclear weapons and to minimize the chance of their ever being used were the work of many US and Russian governments over decades. They have all now been scrapped at the worst of all possible times.

When Hillary Clinton, who came close to being elected president, declared Vladimir Putin to be “the New Hitler,” it confirmed Moscow’s view created by US unilateral withdrawal from arms control agreements that a US nuclear first strike against Russia was being planned.

As this is the very last thing a sane government would want, I have concluded that the US government is insane. This fact should disturb us far more than anything else. Yet, as I, Stephen Cohen and a few others have emphasized, the rapidity with which Washington is pushing us to nuclear Armageddon receives no attention.

It is equally disconcerting that Trump, himself a target of an ongoing coup to remove him from office, has given his support to a coup to remove the elected president of Venezuela and to replace him with an unelected American stooge who declared himself to be president.

That Trump is conspiring against Maduro exactly as the corrupt Obama conspired against the elected presidents of Hondras and Ukraine leads me to see poetic justice in the Democrat Party’s conspiracy against Trump.

Dr. Paul Craig Roberts is the chairman of
The Institute for Political Economy, former associate editor of the Wall Street Journal, and a well known author of many books. He is also a regular contributor to the Herland Report news site as well as The Herland Report TV Show. He has had careers in scholarship and academia, journalism, public service, and business. He has been awarded the Treasury Department’s Meritorious Service Award for “his outstanding contributions to the formulation of United States economic policy.”
Previous Interreligious talks: The lesson of St. Francis of Assisi, Raymond Ibrahim
Next Covington High Scandal: Horrible Racism against Whites