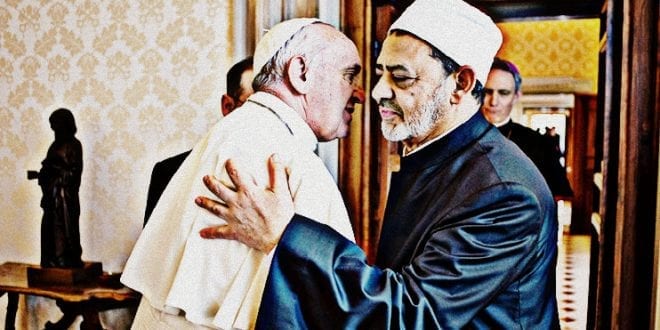 Francis has been even more vocal in drawing continuity between himself and his namesake, Francis of Assisi.  In a recent address, he said that his visit to the two Muslim nations  “represent two important opportunities to advance interreligious dialogue and mutual understanding between the followers of both religions, in this year that marks the eight-hundredth anniversary of the historic meeting between Saint Francis of Assisi and Sultan al-Malik al-Kāmil,” writes scholar, author of Sword and Scimitar and expert on the history of the Middle East, Raymond Ibrahim.

What exactly was “historic” about this meeting?  And how does it relate to Pope Francis’ efforts “to advance interreligious dialogue and mutual understanding?”

Exploring these questions offers useful lessons, including on past and present approaches to Islam.

Before proceeding, it should be understood that Pope Francis often portrays himself as walking in the footsteps of his chosen namesake, Francis of Assisi—“the man of poverty, the man of peace, the man who loves and protects creation,” as Jorge Mario Bergoglio explained in 2013 when he became pope as to why he had adopted the name of Francis.

As for what the pope is characterizing as a “historic meeting between Saint Francis of Assisi and Sultan al-Malik al-Kāmil,” here is the story:

After centuries of Islamic invasions that saw the conquest of at least two-thirds of Christian territory—as documented in my recent Sword and Scimitar: Fourteen Centuries of War between Islam and the West—Europeans finally began to push back via the Crusades in the late eleventh century.

In 1219, during the Fifth Crusade, Francis of Assisi (1182-1226) and a fellow companion sought to do their part by traveling to the Middle East, where they sought audience with Sultan al-Kāmil.

They went despite al-Kāmil’s vow that “anyone who brought him the head of a Christian should be awarded with a Byzantine gold piece,” to quote from St. Francis of Assisi and the Conversion of the Muslims, a good primer on the topic by Frank M. Rega (a Franciscan).

St. Francis’ contemporaries also warned him that Muslims “were a mean people who thirst for Christian blood and attempt even the most brazen atrocities.” The determined men continued their journey, only to experience the inevitable:

“The early documents are unanimous in agreeing that the two Franciscans were subjected to rough treatment upon crossing Muslim territory.

The men of God were seized in a violent manner by the sentries, assaulted, and bound in chains.  Celano reports that Francis “was captured by the Sultan’s soldiers, was insulted and beaten” yet showed no fear even when threatened with torture and death.”

What was the purpose of St. Francis’ dangerous mission?  Was he, as Pope Francis regularly implies, trying “to advance interreligious dialogue and mutual understanding?”  Yes and no. He certainly relied on the word, not the sword.

But the word he offered was as sharp as any sword.  As Rega writes, “Fully aware of the dangers, Francis was determined to go on a mission to the unbelievers of the Muslim nations.  The primary sources are in agreement that he was now ready to sacrifice his life and die for Christ, so there can be little doubt that the intent of his journey was to preach the Gospel even at the risk of martyrdom” (emphasis added).

Francis sought to save both souls and lives: “Converting the Muslims by his preaching was the ultimate goal of Francis’ efforts, and a peaceful end to the war would be a consequence of their conversion.”

As Christoph Maier explains, “Francis, like the crusaders, wanted to liberate the holy places in Palestine from Muslim rule.  What was different was his strategy….   He wanted their total submission to the Christian faith.”

Eventually brought before Sultan al-Kāmil, the monks sought to “demonstrate to the Sultan’s wisest counselors the truth of Christianity, before which Mohammed’s law [Sharia] counted for nothing.”  For “if you die while holding to your law,” warned Francis, “you will be lost; God will not accept your soul.  For this reason we have come to you.”

Intrigued by the cheeky friars, “the Sultan called in his religious advisers, the imams.”  However, and as often happens today when Muslim debaters are at a loss for words, “they refused to dispute with the Christians and instead insisted that they be killed [by beheading], in accordance with Islamic law.”

The sultan refused: “I am going counter to what my religious advisers demand and will not cut off your heads… you have risked your own lives in order to save my soul.”

During their disputation and in reference to “the centuries-old Muslim conquest and occupation of lands, peoples, and nations that had once been primarily Christian,” al-Kāmil sought to trap the monks with their own logic: if Jesus had taught Christians to “turn the other cheek” and “repay evil with good,” he inquired, why were “Crusaders … invading the lands of the Muslims?”

Francis quipped by also quoting Christ: “If your right eye causes you to stumble, gouge it out and throw it away. It is better for you to lose one part of your body than for your whole body to be thrown into hell.”

Francis then explained: “That is why it is just that Christians invade the land you inhabit, for you blaspheme the name of Christ and alienate everyone you can from His worship.”

This is a reference to Islam’s dhimmi rules, which, along with debilitating Christian worship, make Christian lives so burdensome and degrading that untold millions have converted to Islam over the centuries to ease their sufferings.

As should be evident by now—and contrary to what many, including the current pope, suggest—St. Francis did not preach passivity before aggression.

Professor James Powell writes: “Francis of Assisi went to Damietta [Egypt, where Sultan al-Kāmil was] on a mission of peace. There can be no question about this.  We should not however try to make him a pacifist or to label him as a critic of the crusade.”

Another crusade scholar, Christoph Maier, underscores this point: “Francis thus accepted the crusade as both legitimate and ordained by God, and he was quite obviously not opposed to the use of violence when it came to the struggle between Christians and Muslims (emphasis added).”

Indeed, Francis once remarked that “paladins and valiant knights who were mighty in battle pursued the infidels [Muslims] even to death.”

As such, they were “holy martyrs [who] died fighting for the Faith of Christ.”

Such is the man whose footsteps Pope Francis claims to be following by meeting with Muslim potentates “to advance interreligious dialogue and mutual understanding.”

Little wonder those who know St. Francis’ true biography deplore his modern day transformation into some sort of Medieval “hippy”—or, in Pope Francis’ words, “the man of peace, the man who loves and protects creation.”  As Pope Pius XI  complained in 1926:

“What evil they do and how far from a true appreciation of the Man of Assisi [St. Francis] are they who, in order to bolster up their fantastic and erroneous ideas about him, image such an incredible thing … that he was the precursor and prophet of that false liberty which began to manifest itself at the beginning of modern times and which has caused so many disturbances both in the Church and in civil society!”

In the context of confronting Islam, Rega similarly laments that, “for the revisionists, the ‘real’ Francis was not a bold Evangelist, but a timid man, whose goal was to have the friars live passively among the Saracens [Muslims] and ‘to be subject to them.’”

And these are precisely the differences between St. Francis and Pope Francis: while both are willing to dialogue peacefully with Muslims, the medieval saint was not willing to compromise Christian truths or ignore Islam’s reality.

As one example, after a journalist asked Pope Francis about the jihadi slaughter of an 85-year-old priest in France, and how surely he was “killed in the name of Islam,” Francis replied:

The pope failed to mention or understand that violence committed in accordance with a religion and violence committed in contradiction of a religion are radically different.  Yes, people of all religions commit violence.  But the Catholics that Francis cited did not murder their girlfriends and mother-in-laws because of any Christian teaching; on the contrary, Christian teachings of mercy and forgiveness are meant to counter such impulses.

In the same interview, after Francis acknowledged that there are “violent persons of this religion [Islam],” he immediately added that “in pretty much every religion there is always a small group of fundamentalists. Fundamentalists. We have them.”

True, but that which is “fundamental” to every religion differs.  While Muslim and Christian fundamentalists adhere to a literalist/strict reading of their scriptures, left unmentioned by Francis is what do the Bible and Koran actually teach?  The Christian fundamentalist may find himself compelled to pray for his persecutors, while the Muslim fundamentalist may find himself attacking, subjugating, plundering, enslaving, and slaughtering non-Muslim infidels.  In both cases, the scriptures—Bible and Koran—say so.

A final important point: while St. Francis did not mock Muhammad—although the pious called for his head anyway—he unequivocally portrayed the Muslim prophet’s message as false.  Unlike the diplomatic Pope Francis, who never seems to preach Christ to Muslims but rather confirms them in and validates their religion, the sincere saint was actually more concerned with the souls of Muslims, to the point of putting his own life on the line. Along with spearheading the defense of Christianity against Islam—see Sword and Scimitar—that was also one of the traditional concerns of popes, the “Vicars of Christ.” But apparently not for the current pope.

The article was first published at PJMedia.

Raymond Ibrahim is an author and Middle East and Islam specialist.  His books include
Sword and Scimitar, Crucified Again: Exposing Islam’s New War on Christians, and The Al Qaeda Reader. Ibrahim’s writings have appeared in the New York Times, CNN, LA Times, Fox News, Financial Times, Jerusalem Post, New York Times, United Press International, USA Today, Washington Post, Washington Times and others. He has been translated into dozens of languages.
Previous America is cheering for the death of their own culture #Abortion
Next Great State of the Union speech by Trump – Paul C. Roberts

Herland Report: What is Neo-Marxism? It is the post World War II atheist Leftwing ideology that …