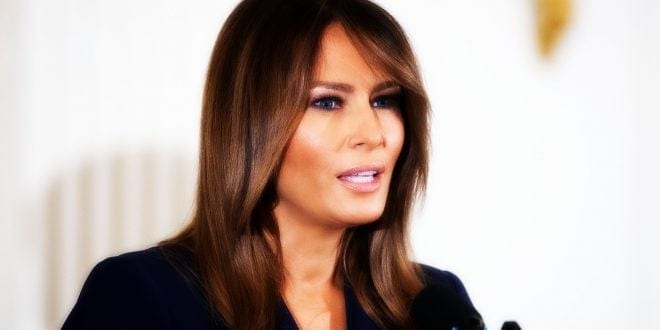 Long list of lies about Melania Trump, Telegraph had to apologize

Herland Report: In the seemingly endless Liberal media attempt to slander the The First Lady, Melania Trump, The Telegraph UK had to apologize the other day.

The long list of #FakeNews lies produced by The Telegraph, illustrates to what degree the mainstream media is willing to publish almost anything, whether true or false about The First Lady.

“The UK newspaper The Telegraph has apologized for a Jan. 19 magazine cover story about Melania Trump that they now say contains “false statements which we accept should not have been published,” further agreeing to pay the first lady “substantial damages” and her legal costs.

“We apologise unreservedly to The First Lady and her family for any embarrassment caused by our publication of these allegations,” the newspaper published Saturday. “As a mark of our regret we have agreed to pay Mrs. Trump substantial damages as well as her legal costs.”

In an age where the media no longer seem to care whether a story is true or false when attacking a political opponent, reactions such as the one against The Telegraph illustrate the problem of gross propaganda being presented as facts.

The same tendency contaminated the #MeToo movement, reducing it to a mere slander campaign, in which unsubstantiated allegations were presented as facts. The result of the MeToo movement has been explained by Bloomberg:

“No more dinners with female colleagues. Don’t sit next to them on flights. Book hotel rooms on different floors. Avoid one-on-one meetings. In fact, as a wealth adviser put it, just hiring a woman these days is “an unknown risk.” What if she took something he said the wrong way?

Across Wall Street, men are adopting controversial strategies for the #MeToo era and, in the process, making life even harder for women.”

The January 19 Telegraph Magazine cover story “The mystery of Melania” contained so many lies and undocumented allegations about The First Lady, that the reactions were equally strong.

When The Telegraph was faced with legal threats, they had to come clean and list the lies presented. It is but an example of the steadily lowering standards for ethics in the Western press:

“The article contained a number of false statements which we accept should not have been published. Mrs Trump’s father was not a fearsome presence and did not control the family.

Mrs Trump did not leave her Design and Architecture course at University relating to the completion of an exam, as alleged in the article, but rather because she wanted to pursue a successful career as a professional model.

Mrs Trump was not struggling in her modelling career before she met Mr Trump, and she did not advance in her career due to the assistance of Mr Trump.

We accept that Mrs Trump was a successful professional model in her own right before she met her husband and obtained her own modelling work without his assistance.

The article also wrongly claimed that Mrs Trump’s mother, father and sister relocated to New York in 2005 to live in buildings owned by Mr Trump.  They did not.

The claim that Mrs Trump cried on election night is also false.

We apologise unreservedly to The First Lady and her family for any embarrassment caused by our publication of these allegations.  As a mark of our regret we have agreed to pay Mrs Trump substantial damages as well as her legal costs.

The Herland Report Scandinavian news site, TV channel on YouTube and Podcasts have millions of readers/viewers yearly. It is a great place to watch interviews and read the articles of leading intellectuals, thought leaders, authors and activists from across the political spectrum. The Herland Report believes in freedom of speech and its editorial policy resides above the traditional Left vs Right paradigm which we believe has lost its relevance and ability to describe the current driving forces in Western politics.
Previous Liberal America’s hate object number one white, hetero males – Joseph Farah
Next America is cheering for the death of their own culture #Abortion