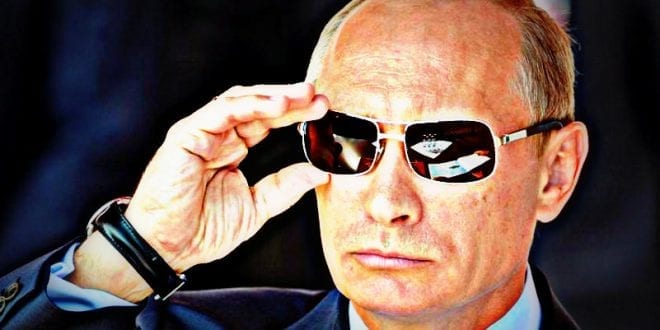 Herland Report: Despite the Robert Mueller report’s conclusion that Donald Trump and his campaign did not collude with Russia during the 2016 presidential race, the new Cold War with Moscow shows little sign of abating.

It is used to justify the expansion of NATO to Russia’s borders, a move that has made billions in profits for U.S. arms manufacturers. It is used to demonize domestic critics and alternative media outlets as agents of a foreign power.

It is used to paper over the Democratic Party’s betrayal of the working class and the party’s subservience to corporate power. It is used to discredit détente between the world’s two largest nuclear powers, writes journalist, bestselling author and TV host, Chris Hedges. (Feature photo: The Atlantic)

It is used to justify both the curtailment of civil liberties in the United States and U.S. interventions overseas—including in countries such as Syria and Venezuela.

It was manufactured over a decade ago by a war industry and intelligence community that understood that, by fueling a conflict with Russia, they could consolidate their power and increase their profits.

Seventy percent of intelligence is carried out by private corporations such as Booz Allen Hamilton, which has been called the world’s most profitable spy operation.

“You have to ask yourself, why is it that Washington had no problem doing productive diplomacy with Soviet communist leaders. Remember Richard Nixon and Leonid Brezhnev? It was a love fest. They went hunting together [in the Soviet Union].

Yet along comes a post-Soviet leader, Vladimir Putin, who is not only not a communist but a professed anti-communist. Washington has been hating on him ever since 2003, 2004. It requires some explanation. Why do we like communist leaders in Russia better than we like Russia’s anti-communist leader? It’s a riddle.

“If you’re trying to explain how the Washington establishment has dealt with Putin in a hateful and demonizing way, you have to go back to the 1990s before Putin,” said Cohen, whose new book is “War With Russia? From Putin & Ukraine to Trump & Russiagate.” Read the full article here.