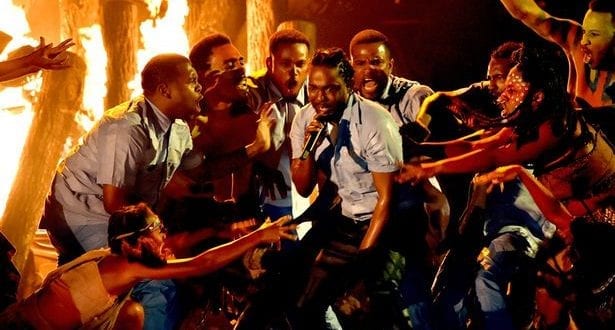 Poet Kendrick Lamar – Brilliant analysis of the tragic downfall of the US, we are the barbarians of our time

Herland Report: One of the leading philosophical poets of our time, Kendrick Lamar, steadily give brilliant cultural analysis of the stadily growing ethnic strife in the US.

It is quite incomprehensible for us who live outside the American culture that the US has not done more the past years to better the situation for the Afro-American population. In the West, we are now the kings of pornography, greed, wealth earned by stealing, a society without families built on egoism, hedonism and endlessly focused on sexual organs.

Several American cities now rate as the most dangerous in the world with a surprising poor quality of education and almost no other opportunities for the young than a life in violence, drugs, prostitution and gangs.

A lifestyle, by the way, that seems to be endlessly hailed by mainstream Afro-American rappers who hardly portray any other value than the reckless abuse of women, drugs, the display of cars and wealth in their videos, oblivious to the constructive power of rappers as role models that lay in showing a better way for the new generation.

White and Black: The same Greed

One may wonder why these rappers, once they get money and fame, are so quick to become filled with precisely the same values that “white Americans” have been criticized of: Greed, lack of empathy with the poor, lack of engagement in the inner city problems.

Many seem remarkably quick to forget the state of their brothers in the so-called “hood”, focusing on feeding their old environment with exactly the kind of negative lyrics that describe the kind of society they wanted to get out of.

Let me quickly add that people like the American rapper, Akon and his recent unselfishly magnificent contribution to aiding those less fortunate is an example of nobility in this case. And there are others, but few.

In this picture, Lamar becomes even more refreshing. He becomes one of very rare voices who are actually able to penetrate through the Hollywood culture and view reality without much filter.

Think about it. The US, a country that has little finances to fix its own Afro-American, inner-city suburbs, that look worse than many Third World Countries, this nation still use billions and billions of dollars to create destruction in countries such as Syria, Iraq, Ukraine, Libya, Afghanistan. This is done in the name of idealism, of “Western democracy and human rights”.

The profit is in the short run. But no empire survived when its leaders forgot about justice. When leaders makes greed and lack of empathy socially acceptable, while not looking after the basic needs of the people, something happens.

In the West, we are wondering why the whole world seems to hate “Western Liberal Democracies”. Why they quiver of fear at the mere mention of “Democracy coming” or “the need for Western Human Rights”.

These nations know what “democracy” means: The coming of bombs and mercenaries, shelling of civilians, dismantling of nations, destruction of state after state in order to install new reigns of terror – while the profits of oil and gas now conveniently end up in new hands, and not those to whom the wealth of the nation rightfully belong.

We have become the Barbarians of our time. Its merciless rulers. The antithesis of freedom for the people. The decadent, hedonistic rich with no regard for the poor man, no respect for the regular guy. No more humility, dignity, self restraint. A lost morality now, solidarity gone.

Still we question why Muslims all over the Middle East hate the US more than ever and wish for its speedy downfall? How the whole world seems to hate the West and now flock towards the East, looking to Russia and other nations for a new, non-petrodollar world where there might be some kind of justice done between nations?

Do the American elite not understand that we, who are outside the American propaganda machine, are the majority in the world, we are watching all this? Shell shocked, we are watching what the US has become. Exactly how will the US rule the world as “the one superpower” to whom everyone is to obey, if fewer and fewer respect the US as justice is not being done or peace not given, but war, destruction and continuous poverty among the poor and the wealth concentrated in steadily fewer hands?

In all this, the US does not provide proper health care, a decent education and human dignity for their own who are trapped inside the American states, that are turning its back even on its own people.

What kind of Capitalism is this?

What kind of democracy is this? It is most certainly the totalitarian kind.

Most definitely not the kind that was founded on the American Constitution with its clear definitions of Equality and Liberty, – the values the once made the USA a great place to live. As the American Dream steadily dies, its original values abandoned and its greatness diminishing, the Rest seem to be losing respect for the nation in the West that once was a beacon of freedom and light to the world.

All these wars and destruction is happening abroad with the strong aid of the horrific foreign policy of the US, while America’s own inner city-suburbs have living conditions on the level of Baghdad and Kabul – note: Kabul and Baghdad after the American invasions that practically destroyed these cities, abolished the rule of law and unleashed criminal gangs and all kinds of illicit activity to the horror of its civilian Middle Eastern population. Not to mention Libya.

Today the same situation is developing in US, with shocking murder rates by police, – in the apartheid and racially divided US the same amount of people are killed yearly by police as in England over a timespan of 25 years.

The US is currently on a path to becoming a Third World Country. It seems not to be popular to care for its own people anymore among the American ruling elites, they seem more obsessed with fancy rhetorical political speeches and lobbyism in the halls of power rather than solving the situation in which the country is in, – multi trillions in debt and doom looming, low standard US’ airports and highways, the educational system one of the worst in the West.

Comparing to the current development and quality in Asia, the US is loosing on almost every level.Not to mention morality, lack of family values, lack of respect for the woman, lack of proper care for the old etc. It’s like we are moving back in time and re-implementing the Feudal System of the Middle Ages. Men are slaves, yet again.

The West: Culture of endless focus on sexual organs?

In the West, we are now the kings of pornography, greed, wealth earned by stealing, a society without families built on egoism, hedonism and endlessly focused on sexual organs.

This was the fear of Alexis de Tocqueville as he foresaw the destruction of democracy, the angst of Hannah Arendt as the predicted the coming new totalitarian states, the prophecies of Aldous Huxley as he foresaw the vanishing civil liberties and the world controlled by propaganda, and this is the terror of 1984.

This is what Saint Gerome warned of during the times of the Roman Empire’s closing days, – in the years before Alaric sacked Rome and the lavish parties, the vanity and complacency of the clergy, the hedonist performances came to a brutal stop. The end of an empire.

The American Elites of today are focused on power and wealth and destroying other peoples countries, supporting oppositions that they fully well know are violently creating terror. The US’ Political Elites are willingly injecting weapons into unstable countries that they know will fall apart when pushed, unleashing self destructive forces and total destruction of civil societies.

Like what has happened to Libya, Egypt, Iraq, Syria, some of the states that were booming with high living standards and good business, growing rates good conditions for the citizens, some with higher living standards than Australia, New Zealand and Southern Europe. And far better prospects than what the current US elites offer their own welfare dependent, poor population.

What we see today is injustice against those who live in the Middle East as well as the deprived within the US.  It reminds us of Hannah Arendt’ description of the concentration camps that the Nazi’s needed during the Second World War.

Why does not the people ferociously react? Why the silent acceptance of the US’ loss of liberties? Some small protests, yes, but on the whole – silently watching propaganda machines such as CNN and FOX News.

This is what brings me to Kendrick Lamar, who is one of our time’s leading US’ philosophical poets. He describes the tragic and dramatic down fall of the US in his various texts at a depth and on a level that makes him a prophetic voice of the rare kind, describing the horrible situation of the Afro-Americans, the loss of morality, solidarity and caring for the young.

Lamar eloquently describes the importance of God and justice is in the midst of all this. His lyrics should be studied as part of the curriculum at the Western universities.