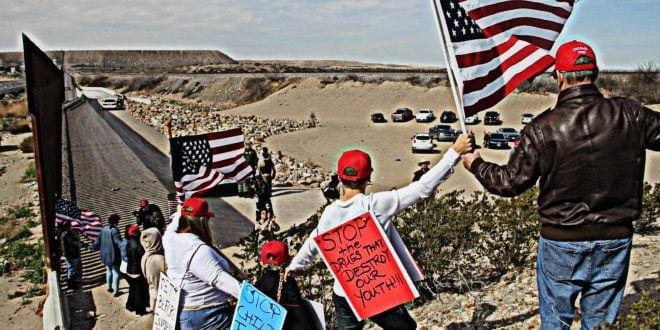 Herland Report: President Donald Trump’s El Paso visit is a great opportunity to point out that the west Texas city is a rats’ nest of law enforcement corruption, a major smuggling route into the U.S. for Mexican drugs, illegal immigrants, and Islamic terrorists and the headquarters of a sophisticated narco-terror ring operated by two of the FBI’s most wanted.

While local officials promote it as one of America’s safest cities, Judicial Watch has exposed in a years-long investigation the disturbing reality gripping the municipality that sits along the Rio Grande across famously violent Ciudad Juárez, Mexico, writes Judicial Watch.

Judicial Watch is the non-partisan educational foundation and public interest group that investigates and prosecutes government corruption. Founded in 1994, Judicial Watch seeks to ensure government and judicial officials act ethically and do not abuse the powers entrusted to them by the American public. Under Tom Under Fitton’s leadership, Judicial Watch was named one of Washington’s top ten most effective government watchdog organizations by The Hill newspaper.

“The border city of El Paso, Texas used to have extremely high rates of violent crime — one of the highest in the entire country, and considered one of our nation’s most dangerous cities.  Now, immediately upon its building, with a powerful barrier in place, El Paso is one of the safest cities in our country.  Simply put: Walls work, and walls save lives.”
– President Donald Trump, State of the Union message, Feb 5, 2019

The Drug Enforcement Administration (DEA) says El Paso is a major hub for Mexican opioids and methamphetamine enroute to the rest of the United States.

Just a few days ago U.S. Customs and Border Protection (CBP) released figures showing that the El Paso sector had an astounding 1,588% increase in illegal immigrant apprehensions during the first month of 2019 compared to the first month of 2018. Most are coming from Honduras, Guatemala and El Salvador.

Drugs and Central Americans aren’t the only things being smuggled in through El Paso. Islamic terrorists are also making it into the U.S. with the help of Mexican drug cartels. Judicial Watch exposed an operation in which Mexican drug cartels smuggle foreigners from countries with terrorist links into a small rural town near El Paso by using remote farm roads—rather than interstates—to elude the Border Patrol and other law enforcement barriers.

The foreigners are classified as Special Interest Aliens (SIA) and are transported to stash areas in Acala, a rural crossroads located around 54 miles from El Paso on a state road – Highway 20. Once in the U.S., the SIAs wait for pick-up in the area’s sand hills just across Highway 20.

Judicial Watch also broke a story about an ISIS training cell just a few miles from El Paso in an area known as “Anapra” situated just west of Ciudad Juárez in the Mexican state of Chihuahua.

Law enforcement and intelligence sources on both sides of the border confirm that cartel-backed “coyotes” help smuggle ISIS terrorists through the desert and into the U.S. between Acala and Fort Hancock, Texas. The areas are targeted for exploitation by ISIS because of their understaffed municipal and county police forces and the relative safe-havens the terrain provides for the unchecked large-scale drug smuggling.

In the aftermath of Judicial Watch’s story about Islamic terrorists operating in Juárez, Beto O’Rourke, the former congressman that’s holding an anti-Trump rally during the president’s event at the El Paso County Coliseum, tried to silence federal law enforcement sources.

O’Rourke, who represented El Paso in the House before a failed Senate bid, has long declared that Juárez is safe even as the notoriously violent region adjacent to his district is renowned for beheadings, gunfights, kidnappings and drug trafficking. The problems in El Paso aren’t limited to the immediate border region. In 2014 Judicial Watch exposed a sophisticated narco-terror ring, operated by two of the FBI’s most wanted, with roots and financing in El Paso.

Its ringleader is an ISIS operative named Emad Karakrah, who was recently released on parole in Illinois. Karakrah smuggled drugs and weapons for the renowned Juárez drug cartel in Mexico and was a logistics and transportation operative for militant Islamists in the United States.

He moved people, weapons, explosives, drugs, money, and other materiel to terrorist cells operating in Chicago, Brooklyn, New York and Saddle Brook, New Jersey, among other locations across the U.S. Karakrah and his cohorts— including two of the FBI’s most wanted terrorists (Jaber A. Elbaneh and Adnan Gulshair el Shukrijumah)—operated from El Paso. Judicial Watch also produced an investigative documentary about the narco-terrorist cell.

Campa served in the department as a jailer and officer for two decades. He left the agency following the indictment allegations, supposedly for embezzling $5.6 million in Homeland Security Investigation (HSI) funds, sources told Judicial Watch.

His boss, Sheriff Richard Wiles, has also been embroiled in several scandals. Besides looking the other way as one of his trusted deputy chiefs embezzled millions of dollars, Wiles, serving his third term as sheriff, attended a fundraising event at the home of a convicted felon with connections to the illegal drug trade.

El Paso County sheriff’s deputies have reported, in detail, to Judicial Watch how the sheriff’s office manipulates and phonies-up crime reporting statistics to minimize the true crime rate in the county.