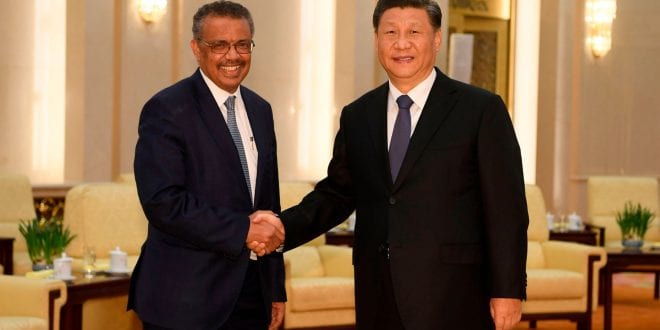 Why did WHO push catastrophic numbers from Corona in March?

Herland Report: Corona shutdown came due to blind trust in WHO, Imperial Report predicted millions dead:  “You have a 0.03% chance of dying from Covid-19 in the state of California. Does that necessitate people being out of work,” asked Accelerated Urgent Care owner, Dr. Dan Erickson recently.

He showed how the Covid-19 has taken very few lives in the state of California, questioning the continued economic lockdowns.

The question is legitimate, as China – whom we all seem to follow in their spearheading of lockdowns – only closed down its epicenter, Wuhan and its Hubei province.

They compared the Covid-19 to an influenza with millions of cases, but small amounts of death.

The death rate for California turns out to be approximately 0.03 %, in line with the Rystad Energy estimates and others. Rystad reports that as of 27 April, 54 million people have likely been infected with Covid-19.

Dr. Anthony Fauci, the Director of the US National Institute of Allergy and Infectious Diseases, published a letter on March 26, 2020 in the New England Journal of Medicine.

In the article, linked below, he states that COVID-19 may turn out to be comparable in numbers of deaths to a seasonal flu or similar to two relatively minor flu pandemics in 1957 and 1968, PatriotFire writes.

If Covid-19 is comparable to an Influenza, the pandemic scare that now is tearing the West to pieces clearly is driven by completely other forces than the mainstream media projects.

Back in early April, the US allowed “suspicion of Corona” to be registered as “Corona death”. This means that since April, we do not have accurate numbers for Corona in the United States.

The same is true for the UK. Corona death counts not necessarily correct: Hospitals list COVID-19 as Cause of Death based on assumption.

In whose benefit is it to make it seem like many more died from Corona than the actual numbers? And why the fight against proven remedies?

“New York funeral home directors blew the whistle about inflated coronavirus death numbers. Death certificates mark “COVID-19” as the cause of death even when the deceased hadn’t tested positive for coronavirus, much less actually died of the virus. This week, a San Diego county supervisor suggested the numbers are even more inflated, wrote PJ Media in May:

“There may be four types of recorded coronavirus deaths: (1) deaths only caused by COVID-19, (2) deaths in which COVID-19 ended the life of someone already struggling with health conditions, (3) deaths from other causes but after a patient had tested positive for the virus, and (4) deaths falsely marked “COVID-19” when there was not even a test.”

When comparing regular seasonal influenzas to Covid-19, the flus are so far more deadly. 650 000 people die yearly of a regular influenza, according to the WHO. So far, the Covid-19 numbers are approximately 250 000 pr May 7th, 2020, according to Life News.

US corona death numbers are hard to estimate the accuracy of, since “assumption of corona” is evidence enough to register the death as corona. This makes it almost impossible to assess how many actually die with corona in the US.

Even in the US, the 2018 deaths from regular influenza was around 80 000, according to CNN. Where was the overly eager Bill Gates in 2018? 80 000 deaths in the USA alone is quite a pandemic. Why no media attention back then, why no requirements to shut down the economy and isolate everyone?

The current number of deaths in the US are unreliable, as “assumption of coronavirus” is enough evidence to submit “death by corona”.

Stanford University School of Medicine professor John Ioannidis is one of the most-cited scientists of all times in the scientific literature. He said on March 17 that the economic lockdowns as a response to Covid-19 could be a “once in a century evidence fiasco.”

“It is now clear that the lockdowns were a major mistake everywhere except the New York City metro area, and possibly even there,” said former New York Times reporter Alex Berenson.

Why was the Imperial Report draft pushed politically to cause shutdown?

Corona shutdown came due to blind trust in WHO, Imperial Report predicting millions dead: From day one, we suggested at The Herland Report that the corona crisis must be seen in light of the US-China trade war. We wrote about the World Health Organization leader, Marxist-Leninist Dr. Tedros’ possible politization the day before President Trump addressed it.

The Imperial College Report, which showed that millions would die, was central to make the UK and US change their herd immunity strategy.

Corona shutdown came due to blind trust in WHO, Imperial Report predicting millions dead:  The report has since turns out to be fraudulent, its author Neil Ferguson sacked and the entire report not even peer-reviewed. Ferguson was notorious for overestimating numbers, both during Ebola and the Swine flu. Ferguson estimated that 150 000 would die in the UK during the Foot and Clove flu. 200 died.

As it turns out, Dr. Anthony Fauci now says that it was he and Dr. Blix who came into president Trump’s office and made him change his mind about herd immunity, allegedly based on the Imperial Report.

It seem then, that it was Dr. Fauci who persuaded the president to shut down, which effectively has stopped the soaring US economy. They allegedly did this based on the Imperial College Report, which said millions would die from coronavirus in the United States.

As many as 1 100 000 died from smoking in the same time period as Covid-19, according to Worldometer info. 2 million died from cancer in the same period, and as much as 2.4 million from hunger. Bill Gates, WHO and CNN saw no need to sound the alarm on that.

1.1 billion now risk starvation due to the extreme lockdown measures. In the UK alone, 3 million go hungry due to lockdown, according to a recent report.

The narrative has become that of either “caring for the people” and remaining in lockdown, or caring “only for the economy and money” and reopening. This ill-advised narrative prevents politicians from reopening, although they know this to be the right move.

The economy is the well-being of the people. With a destroyed economy, mass unemployment and bankrupcies, there is no healthy people, only national suffering. This seems to be the chosen path.