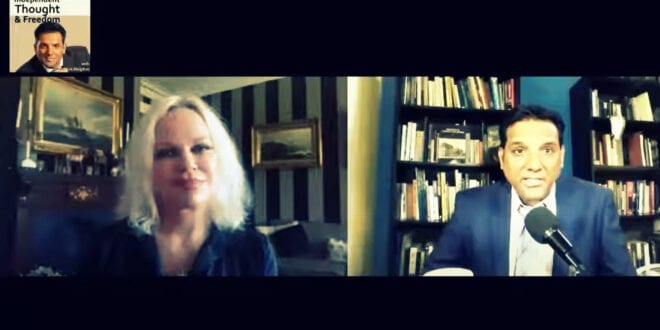 Herland Report: Watch Hanne Nabintu Herland interviwed by the Trinidad born political scientist, Dr. Kirk Meighoo on her latest book, New Left Tyranny. The Authoritarian Destruction of Our Way of Life, having grown up in Africa and the life story of the Norwegian author.

In the podcast “Independent Thought and Freedom”, Dr. Meighoo speaks to people who are shaking up politics, economics, society and ideas around the world. Many famous authors have been on his show, such as

His scholarly articles on Trinidad and Tobago politics and Caribbean development have been published in The Round Table: The Commonwealth Journal of International Affairs, Commonwealth and Comparative Politics, Keesing’s Annual Register (First edited in 1758 by Edmund Burke), Jane’s Sentinel, among others.

He has appeared in extensively on radio, television and newspapers in Trinidad and Tobago, Jamaica, on the BBC, in the New York Times, Mauritius and Singapore, in addition to addressing various United Nations and Commonwealth bodies.

As a consequence, social cohesion dissolved into selfishness and a lack of personal responsibility. Western societies have been fragmentized into the hate politics of Identity Politics. This is a remarkable book by a remarkable person. Excellent work.” Dr. Paul Craig Roberts, leading American political economist.

Herland tells the story of how she was born and raised in Africa and moved to Europe when she was 19 years old. It was a massive culture shock as she quickly noticed the biased way in which Europeans viewed Africa.

The permeating Left wing idea seemed to be that one should feel sorry for anyone who did not come from Europe. Herland found this attitude to be remarkably racist in its lack of equal treatment regardless of skin color.

In the bestseller autobiography, Respekt, she has elaborated at length on the ignorance in Scandinavia pertaining to what Africa really is, describing how she felt that society is fact resistant to the positive African reality.

While the Left wing policies have automatically given Africans “the victim card”, many Europeans are taught to think that one should “feel sorry for” those who come from other nations, implementing a denigrating view on foreigners.

She explains how she early on realized that the Left wing attitude implemented a racism that based on the color of someone’s skin, established a Social Darwinian attitude towards the person as someone to pity. Herland has spent many years in Scandinavia battling this sense of racism, also found on the Right wing side in politics, in the notion that “once foreigners leave, all will be well in Europe.”

Herland asserts in New Left Tyranny. The Authoritarian Destruction of Our Way of Life that the Social Darwinian attitude of denigrating non-Western foreigners in Northern Europe and Scandinavia is found both within the Left and the Right wing in politics. In New Left Tyranny, she explains how this attitude is linked to the Socialism found in Marxism, neo-Marxist 1960s New Left and the National Socialism (NAZI) ideology.

Herland was surprised when first arriving in Norway to find this attitude permeating society. In the interview, she explains how this motivated her to enroll in cultural studies and she became a historian of comparative religions.

Her initial dream was to become someone who could explain to Europeans the complexities, plurality and beauty of Africa and other nations, as she felt that Europeans lived behind a media wall of negative propaganda of other nations.

In the interview with Dr. Kirk Meighoo, who is from Trinidad, but grew up in Canada and has his PHD from the United Kingdom, Herland elaborates on how it is to face the fact resistant Westerners who does not comprehend the degree of propaganda he is subjected to.

Dr. Kirk Meighoo writes: Hanne Nabintu Herland is author of the newly released book, New Left Tyranny, which she adds to her list of 9 other books written in Norwegian and English, including Alarm! Reflections on a culture in crisis and an autobiography Respect published in 2012.

Hanne is a Scandinavian historian of comparative religions, bestselling author, columnist and TV producer, known from the media for sharp analysis and fearless speech. She was born and raised in Africa, has lived in South America, the Middle East and traveled extensively in Asia.

In our wideranging discussion, we speak about:

– the global coronavirus overreaction, growing up in Africa, the Congo, East Africa, her culture shock at returning to Europe at the age of 19.

She also elaborates about the fear of non-Western foreigners by many Norwegians, the hypocrisy of the West with regard to its foreign “allies” and “enemies” and her new book, New Left Tyranny.

The book addresses issues such as the importance of historic Christian values to Western Civilisation, the neo-Marxist assault on Western civilisation and historic values.

She also speaks about how her bestselling blockbuster book in 2010 allowed her to start the Herland Report as an independent media house.

Herland addresses the dangerous emergence of simplistic race thinking on the right and left, censorship in Norway vs. US and UK, Black Lives Matter and Donald Trump.

She elaborates on how the Viking spirit was quenched in Scandinavia to a meek socialism, her Christian foundation and how she relates this to interaction with people of other religions and faiths.

She also speaks about the famous atheist and social scientist and one of Europe’s leading intellectuals, Jurgen Habermas and his turnabout with regard to secularism and Christianity.

The murderousness of atheism, for example Stalin, Pol Pot, Hitler is compared by Herland to the misuse of power done by so many political leaders, and she talks about the powerlessness of Donald Trump.

She explains how, after having done dozens of interviews with leading US officials, authors, former CIA and NSA directors, the leaders at Judicial Watch, senators and many more, the feeling that the US is close to a state of civil war is premanent. Its President has limited powers in the face of the Deep State, she claims.

Herland also addresses globalism and the dominance of corporations, the danger of a strong state being able to be controlled by a small group. the danger of socialism, the merging of NGOs with global billionaires and multinational corporations.

Finally, Herland stresses the importance of diversity and difference and the nation state and how Jordan Peterson’s 12 Rules for Life. An Antidote to Chaos may be precisely what many need to read in a time of upheaval such as our own.

About Dr. Kirk Meighoo: He is the author of Politics in a ‘Half-Made Society’: Trinidad and Tobago 1925-2001 and co-author of Democracy and Constitution Reform in Trinidad and Tobago with Court of Appeal Justice Peter Jamadar. Dr. Meighoo has the unique honour of being the only West Indian to have launched a book in the UK House of Commons in Westminster.

Dr. Meighoo served as an Independent Senator and also in various governmental capacities, including Vice-Chair of the Constitutional Reform sub-committee of the Vision 2020 process, and on the President’s Committee for National Self-Discovery.

Herland Report: Over the years many have questioned what really happened during the 9/11 …