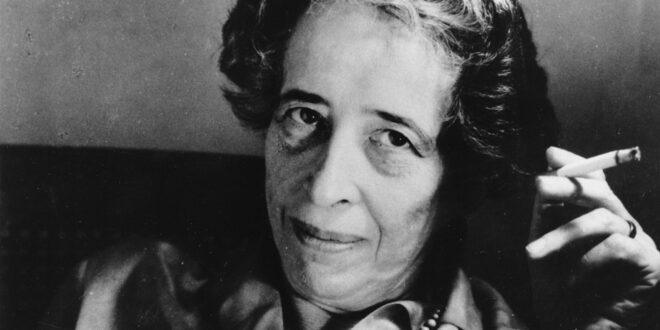 Hannah Arendt: Understanding Totalitarianism and the reign of Terror

Herland Report: Understanding Totalitarianism: The German philosopher, Hannah Arendt is considered one of the most influential political theorists of the 20th century.

She was a Holocaust survivor who spent many years questioning how it was possible for a modern, democratic state such as pre-World War II Germany, to turn into a totalitarian state and a brutal regime that killed millions of its own population.

Her point was that precisely because modern democracies have such well-developed, strong institutions and hierarchical organized structures, the population is inclined to obey orders without reflecting sufficiently on individual ethic responsibilities, writes historian of comparative religions and author, Hanne Nabintu Herland.

Understanding Totalitarianism:  The desire for global power characterized the totalitarian elites of Germany and the Soviet Union, coupled with the very successful recipe of using terror to control the masses and turning a the population into obedient slaves of the system.

In her ground-breaking book, The Origins of Totalitarianism, she analyzed 19th Century anti-Semitism, nationalism and racism as tools of imperialism – and its influence on the 20th Century growth of totalitarianism.

In the attempt to understand how the rise of totalitarianism was possible in Germany and Russia, Arendt looks at the power structures that led to the silencing of an entire population out of fear for its ruling elites.

Understanding Totalitarianism:  The desire for dominion and unlimited expansion fueled the late 1800s boost for imperialism.

At the time, nationalism was strong and its disdain for foreigners who did not fit the social or ethnic definition of a citizen.

In the totalitarian form, found in Marxist atheist regimes such as the National Socialist system under Hitler and Communism under Stalin further toned up the rigid requirement of consensus, both ethnically, socially and religiously.

Yuri Mashkov, a Soviet dissident who was exiled to the United States in the 1970s, explained at a conference in New Jersey in 1978 that his life, in which he had spent many years in the Soviet concentration camps, came to change once he realized despite the naked Soviet propaganda about the “wonderful life of Communism”, he was  actually living under a regime of absolute rightlessness and absolute cruelty.

His training had taught him that Communism was an idealistic teaching that brought happiness and peace. Mashkov describes the horror when realizing that in reality, Communism was the very opposite.

He discovered that Marxism in essence was a complete teaching of totalitarianism, of an absolute slavery, of the state desire for full control over its citizens.

Hannah Arendt views the growth of totalitarianism as the product of the disintegration of the traditional nation-state.

The pursuit of total political power at the expense of solving the practical problems of society, creates a society in which neglect of the needs of ordinary people dominates and the ruling elite. In such a system, it becomes socially acceptable for politicians not to care about the population, as their main duty is to carry out the will of the powerful economic and ideological elites.

The revolution of social structures was necessary in order to change the Western system from its traditional form in order to pursue the raw, political power overriding the interests of the people.

Arendt points out that totalitarian ideologies seem to have an appeal due to its promise of protection against insecurity. Precisely the socialist element, nurtures the establishment of ‘state benefits for everyone’, in such a manner that personal responsibility is evaded and the state becomes responsible for the welfare of its citizens.

After World War I and its unimaginable sufferings for millions of people, Arendt argues that precisely this opened the population for the promises of strong elites to solve the problems and provide security.

Both Hitler and Stalin actively used media propaganda in the pursuit of acquiring power over the population and installing the idea of total security once personal freedoms and the right to critical thinking was given up.

Previous The Metaphysical World and its Relevance to our Existence
Next Hannah Arendt: Totalitarianism is product of the disintegration of the nation-state