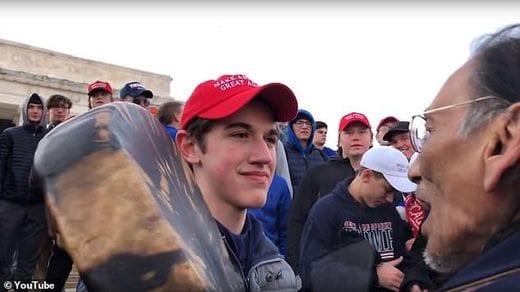 We had several articles on the Covington Scandal back then.

It happened in January, 2019 and did not end particularly well. The assault on the young Catholic, Christian boy was so horrible that CNN and Washington Post alone have so far paid Sandmann around 500 million USD in damages.

As it turned out, the accusations against the MAGA hat, Trump supporting young student were entirely false. The total defamation mainstream attack on Sandmann was launched way before CNN and others even bothered to check the facts in the story.

Long before any evidence came on the table, the young student was defamed as a white, Christian, male racist. It seems as though his white skin color and religious affiliation was all the evidence needed for the Liberal media to instigate a full front attack.

The Covington scandal may be one of the worst demonstrations of racism against whites in the US in a long time. Nick Sandmann and his team of lawyers initiated a defamation lawsuit.

Some are now settled. “Sandmann’s legal team settled a $250 million defamation lawsuit last week against The Washington Post and settled a $275 million lawsuit against CNN in January, 2020,” writes Daily Wire:

“CNN was probably more vicious in its direct attacks on Nicholas than The Washington Post. And CNN goes into millions of individuals’ homes,” Wood told Fox News’ Mark Levin last year. “CNN couldn’t resist the idea that here’s a guy with a young boy, with that Make America Great Again cap on. So they go after him.”

“They really went after Nicholas with the idea that he was part of a mob that was attacking the Black Hebrew Israelites, yelling racist slurs at the Black Hebrew Israelites. Totally false,” Wood continued. “Now you say you’ve seen the tape; if you took the time to look at the full context of what happened that day, Nicholas Sandmann did absolutely nothing wrong. He was, as I’ve said to others, he was the only adult in the room.” End quote.

The Covington Scandal defamation lawsuit: The video about the boys version of the story, corroborated with video clips from the scene, showed that the media portrayal of the situation was false.

Here is the hypocrisy from the broadly “white mainstream media”: None addressed the group of four black Hebrew Israelites’ who, as may be heard in the video, abused both the white boys, the native Americans and others who happened to pass by.

The native Americans were addressed in a remarkably rude and racist way.

Why the attack on the white Catholics who offended nobody – only smiled – and no mention of the ugly language from the Black Hebrew Israelites?

We suspect the American mainstream media outlets would never dare to create the same type of national lynching mode against the black Hebrew Israelites as they did with the young white boys. Note that racism is judging someone based on his skin color alone.

As it even turns out, the native American Indian Omaha tribe elder, Nathan Philips who wore the drum, is reportedly known to be a notorious liar.

The man was never a Vietnam veteran, although this has been his claim in media reports. Is he protected from criticism due to his skin color and identity as a native?

The traditional, Western principle of equality regardless of race, creed, ethnic background definitely seems to be lost in America.